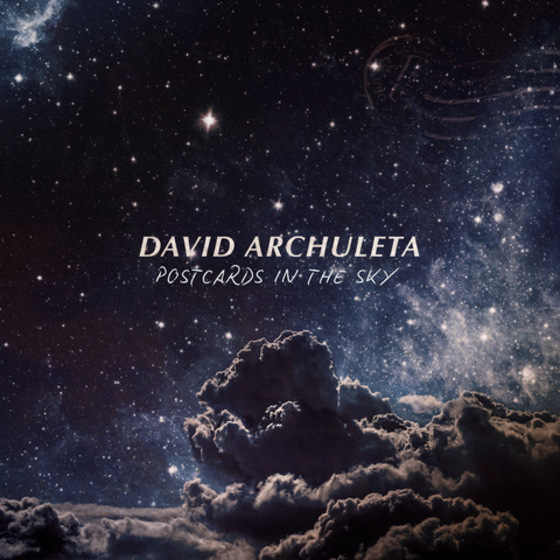 Oct 15, 2017
Platinum-selling international pop star David Archuleta will release Postcards in the Sky on October 20. This is David’s first full-length project since 2013’s
No Matter How Far.  Fans can pre-order the 16-track LP, here: Postcards In The Sky.
The album — released on Archuleta’s own Archie Music/Tone Tree Music — is one he started on after returning to the public eye following a two-year stint doing volunteer missionary work in Santiago, Chile.
That experience, chronicled in songs like “Numb” and “Spotlight Down,” inspired Archuleta to change his approach to songwriting and go beyond his Top 40 roots.
Here he focuses on honest, heartfelt lyrics that combine the process of self-reflection with the power of pop melodies. “The music is all about saying, ‘Wait a second, why am I doing this in the first place?’ ” Archuleta says, explaining where his head was at when he relocated to Nashville to start writing songs with Music City tunesmiths like former Civil Wars star Joy Williams, longtime Sheryl Crow collaborator Jeff Trott, Jeremy Bose, Trent Dabbs, Katie Herzig, and luminary producers Jeremy Bose, Cason Cooley and Jamie Kenney, among others.
“It was therapeutic working with them,” Archuleta recalls. “I wrote these stories [my career so far]. … That was a great experience and I learned a ton, and now I’m here and I’m like, ‘Wow! I get to create music, but this time I have my own reason to do it.”
Boasting a new sound to wrap itself around the golden-voiced savant’s world-renowned singing, the music on Postcards bursts with a kaleidoscopic fusion of dance-pop hooks (“Up All Night”), lush balladry (“Say Me”) and dreamy synthesizer symphonies (“Postcards in the Sky”).
“These songs are about the struggle of finding your own voice and how hard it can be sometimes to believe in yourself,” the singer explains. Archuleta took inspiration from the constellations for the project.
“The upcoming album as a whole serves that purpose to get people to look up and for something more,” he says, “whether that’s looking for God, for a deeper connection to life or finding more of who they are. I’m a huge believer that looking up will always serve a purpose, and we will move forward more filled and stronger.”
Below is a track listing for Postcards. Lyrics and credits are available upon request.  Tour dates — with more announced later this month — follow the tracklist.
Postcards in the Sky tracklist:
1. “Postcards in the Sky”
2. “Invincible”
3. “Numb”
4. “Someone To Love”
5. “Spotlight Down”
6. “I’m Ready”
7. “Other things in Sight”
8. “Say Me”
9. “Upset With Me”
10. “Up All Night”
11. “Waiting in the Stars”
12. “Seasons”
13. “Cracks of Heaven”
14. “Shine a Light”
15. “Aiming for Hope”
16. “A Little Goes a Long Way”
David will support Postcards In The Sky with tour dates in cities including:
Oct 20 Quezon City, Philippines
Oct. 25 Sellersville, Penn.
Oct. 26 Pittsburgh, Penn.
Oct. 27 Cincinnati, Ohio
Oct 30 Chicago, Il.
Oct. 31 Minneapolis, Min.
Nov. 1 Indianapolis, Ind.
Nov. 2 Kansas City, Mo.
Nov. 4 Franklin, Tenn.
Nov. 18 Pocatello, Idaho
Additional dates will be added and can be seen by visiting www.davidarchuleta.com.
About David Archuleta
Since launching his career in 2008, when he became the runner-up of American Idol with 44 million votes, Archuleta has found success both at home and abroad. “Crush,” his debut single, sold more than 1.92 digital copies, paving the way for a string of albums that have touched on modern pop, Christian music and holiday favorites. Archuleta has been a familiar face on TV, too — not only on American Idol, whose cast he joined at 16-years-old, but also on shows like iCarly and Hannah Montana. Finally, he made the New York Times’ bestsellers’ list with his 2010 autobiography, Chords of Strength: A Memoir of Soul, Song and the Power of Perseverance.
Archuleta took a break from the public eye in 2012, when he put his singing career on hold in order to volunteer at the La Misión Chile Rancagua in Santiago, Chile. A member of the Church of Jesus Christ of Latter-Day Saints, Archuleta worked as a volunteer missionary for two years. Upon his return, he began changing his approach to songwriting, going beyond his Top 40 roots to focus on honest, heartfelt lyrics.
Archuleta’s new sound — evident on Postcards In The Sky — is a blend of contagious melodies, his signature muscular vocal style and personal stories about his life and recent experiences.