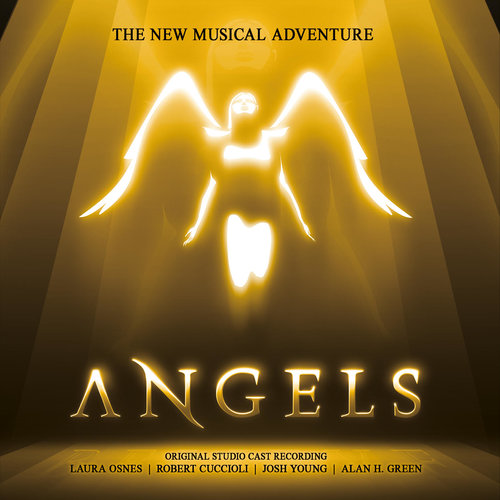 An announcement almost a decade in the making, “ANGELS,” an original studio cast recording with music arrangements by veteran worship leaders and performances by a star-studded Broadway cast, will release October 27 from Broadway Records.

“For generations to come, Sera, the angel of light, will become the name on every child’s lips, when they place their Christmas angel on top of the tree” said Thornton. “Creating the music was so exciting.  It’s powerful, funny, deeply moving, and carries the eternal message of hope and love”.

“Making the music for the album was an exciting venture,” said Holmes.  “It was very fulfilling going on a journey with the characters, creating sounds and arrangements that reflect the great themes of the story.  The final sound is one of new beginnings, with an underlying message of enduring hope, love and friendship.

Produced by Mark Kang and Marcus Cheong, who also co-wrote the musical with Ken Lai, “ANGELS” is the epic story about the ancient war between the angels and Lucifer’s demons. This timeless tale of hope versus despair, angels versus demons, is told through the eyes of Sera, the Angel of Light. Though she is gifted with the power to control light, she aspires to a more heroic role. Facing the opposition of Lucifer and the chaos he has created, Sera must find the courage to rise in victory over him and fulfill her true purpose.

“It is more than just an entertaining album,” said Kang. “We believe listeners will feel the presence of God as they follow the angel Sera through this epic journey of good vs. evil and experience the hope that is found in living with faith.”

The release of “ANGELS” has been in the making for more than a decade. In 2008, the musical was weeks away from making its debut in Shreveport, Louisiana, when the stock market collapsed, affecting funding. Eventually, the producers had to make the painful decision to put “ANGELS” indefinitely on hold. Ironically, the weekend that “ANGELS” was originally scheduled to open in Shreveport, Hurricane Gustave came ashore, causing major flooding and disaster to the area.

“I believe God’s grace was working even in the midst of great loss and devastating storms,” said Cheong. “We are so grateful to be given this second chance to share the story and music of ‘ANGELS’ with everyone. This album gives a message of hope and God’s promise that we are never alone and that all things work together for His good. We believe it is something so many people need to hear right now.”

Producers will celebrate the release of “ANGELS” with special events in New York on Oct. 25 and in Sydney, Australia, Cheong’s hometown, on Nov. at 28.

The album will be released on Friday, October 27, 2017 and will be available on iTunes, Spotify, Amazon, and other major music retailers. The album is now available for pre-order at BroadwayRecords.com and Amazon.

Broadway Records (Van Dean, President)is one of the preeminent theatrical record labels to produce original cast albums for major Broadway and Off-Broadway shows including the Grammy® and Tony Award-winning The Color Purple (2015 revival), the Grammy® nominated Matilda The Musical and Fiddler on the Roof (2015 revival), Allegiance and Disaster! among others.

Recent releases include Anastasia, Bandstand, Groundhog Day, The Lightning Thief, The Visit, Doctor Zhivago, Side Show (2014 revival), Bonnie & Clyde, Big Fish and NBC’s television events, The Wiz Live! and Peter Pan Live!. The label’s critically acclaimed “Live at Feinstein’s/54 Below” series features top Broadway stars including Patti LuPone, Aaron Tveit, Annaleigh Ashford, Norbert LeoButz, Sierra Boggess, Laura Benanti, Laura Osnes, Emily Skinner & Alice Ripley, Frank Wildhorn and Friends,Micky Dolenz and many others. Most recently, Broadway Records launched the Broadway for Orlando initiative (in partnership with creators Seth Rudetsky and James Wesley) as a response to the Pulse nightclub mass shooting. The all-star benefit single, “What the World Needs Now is Love” has been downloaded more than 65k times and raised over $100k to date and counting. Additionally, the song reached No. 1 on the iTunes song chart in its first week of release and broke into the Billboard Top 100 with no commercial radio play.    To learn more, visit BroadwayRecords.com.