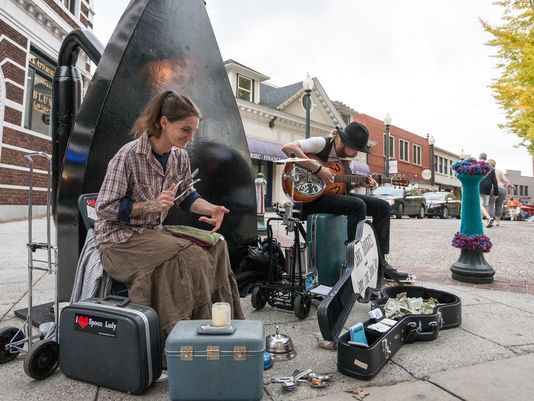 Sometimes you will find the most beautiful things in the humblest of places. Recently I was scrolling through Facebook as I often do and I saw a video by Abby the Spoon Lady and Chris Rodrigues. It was for #PlayMusicOnThePorchDay and they were sitting on the porch playing music. The song Angels In Heaven struck a chord in my spirit as I listened to it and I shared it. A week or so after that the video on Facebook had over 17 million views; apparently it touched a lot of other people too. You can watch the video above.

I reached out to Abby and Chris on Facebook and they both were quick to respond and seemed so humble about their talent. I asked Chris if he had ever thought about performing at MerleFest, the annual music festival in Wilkesboro, NC since we are only a couple of hours away from Asheville. He said that he hoped they could do that one day. I hope they can too; they would be a great fit for the crowd that attends the festival honoring the lives of Merle and his dad Doc Watson.

The Citizen-Times did a story on street-performers in Asheville, North Carolina where you can read more about Abby’s very interesting testimony and more about how she and Chris met and started playing together. You can read the article: Living Portrait series: The Spoon Lady here. This is an excerpt of the Citizen-Times article:

If there was ever a busker in downtown Asheville that stopped you dead in your tracks and made you think “Am I really witnessing what I think I am?,” it would have to be Abby “The Spoon Lady” Roach.

The immediate conjuring of video images and lyrics from the song “Spoonman” by Soundgarden are impossible to ignore. But was Spoonman even real? And if so, is it even possible for someone to really be playing the spoons like that, right here, right now, in the streets of downtown Asheville?

You suddenly notice her counterpart, Chris Rodrigues, gracefully strumming a guitar, singing, playing a harmonica and tapping two foot pedals all at the same time, like it’s easy, and you quickly realize you are witnessing much more than just two people trying to make a dollar to drop into their bucket. You are witnessing something truly special and unique, perhaps something you may never see again.

For tourists and locals alike, it might be easy to assume these are just “mountain folk” who somehow learned how to play music on the front porch of their cabin and found their way into downtown Asheville.

What might surprise you, however, is that Abby the Spoon Lady is a full-time musician who has traveled the contiguous 48 states, recorded albums and been recruited by “America’s Got Talent.”

She met Rodrigues while playing in Asheville on the downtown streets. “Eventually we decided to play a set together … and it stuck. I’m very fortunate to have found such a reliable and kind person as a musical partner,” she says.

The feeling seems to be mutual. Rodrigues, who is also a full-time musician, says, “We decided to play a set together and have been playing together ever since. She is one of the most talented and smartest people I know. Thank God I met her.”

Abby and Chris are in the process of putting together an album of gospel songs. One drawback for street performers in Asheville is that they aren’t allowed to sell CD’s and other merchandise. Follow Abby The Spoon Lady and Chris Rodrigues on Facebook and Twitter to keep up with the progress of their new gospel album.