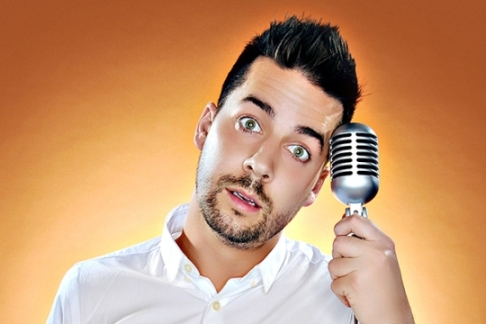 It was a chilly September evening at New Community Church in Wexford, PA.  The lights went down.  The anticipation was building.  Suddenly, the screens came to life, and an episode of “Church Hunters” began to play.  A young couple was “shopping” for a church, guided by their trusted host, who had hand-selected a few churches that seemed to cater to exactly what the couple wanted.  The tongue-in-cheek humor highlighted the consumer mentality of church-goers in today’s society.  This funny video had the audience primed for the hilariousness to follow.

After a few introductory comments from the church’s senior pastor, John Crist bounded onto the stage amidst enthusiastic applause, his high-energy spirit shining through.  A few minutes into the show, John declared that he wanted to get a feel for the type of crowd he was dealing with, so he gave everyone a Christian music “quiz,” playing snippets of several songs.  Depending on the crowd’s ability to finish the songs, he would assess his audience.  One might expect to hear some Chris Tomlin, perhaps a traditional hymn or two.  “Awesome God” didn’t seem all that out of place, but “Father Abraham” raised some eyebrows.  The Farmer’s Insurance jingle was a bit odd, and “Bohemian Rhapsody” was just straight out of left field.

John then went on to comment on the power of music to bring one back to a particular moment in time.  He recounted his experience as the “offering entertainment” as a boy, and how the same song played at a recent Hobby Lobby shopping trip immediately transported him back to his childhood.  He reenacted the event for the good folks of Wexford, complete with interpretive dance moves and the sudden, magical appearance of colored scarves.

Remaining on memory lane, John also reminisced about the trouble he and his siblings caused, despite being pastor’s kids.  He told of one instance in particular when these sweet, innocent pastor’s children put a fish into the church’s baptismal.  The baptismal candidates may have thought they were finding healing, but that day, they were more likely to be finding Nemo.  In one of his many interactions with the crowd, this story brought to light New Community Church’s baptizing practices, dunking people in a stream on their property, rather than the traditional baptismal.  John found this to be especially amusing, and couldn’t resist bringing it up throughout the night.  These interactions are also part of what makes John so relatable.  It’s part of his charm.  He does not put himself on a pedestal as a performer who is better than his audience.

Partway through the show, a member of the audience (who also happened to be sitting up front) got up and left the room.  John took that opportunity to question this man’s wife, asking her such things as how they met, where they went on their first date, and their toddler’s name (which, also much to John’s amusement, turned out to be Clark Kent.)  These tidbits of information would later be used to quiz the husband upon his return, just to make sure the couple had their story straight.

Throughout the night, John poked fun at various “weird” Christian behaviors and practices, commenting that these observations are only funny because they are things that have likely crossed everyone’s mind.  In a moment of seriousness near the end of his set, John talked about God’s gift of humor, and how it connects people and reminds us that we’re all human.  He referenced Tim Keller, saying that we don’t become more spiritual by becoming less human.  These sincere reminders and the multitude of laughs made for a night very well spent, sending everyone off in a much brighter mood and with a bounce in their step.