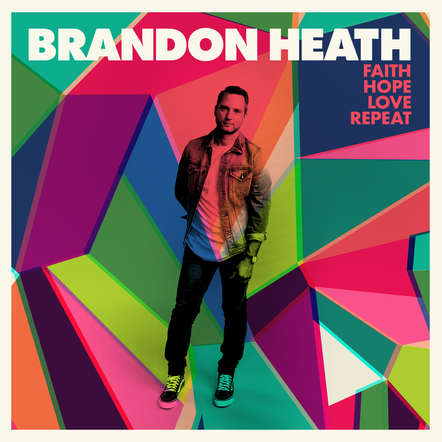 Brandon Heath shared the news of his new baby and new album today, exclusively on People.com.

Brandon says, “I can’t wait to be a daddy! Siebe is just beautiful – she glows. I know she’s going to be such a great mom.  We are working on getting everything ready and just painted the nursery this weekend.”

In the same breath, Brandon — “an artist you shouldn’t miss” (New York Times) — announced he will release his sixth studio album Faith Hope Love Repeat on October 20. Along with 11-new songs, he has also created videos for each song on the album, in American Sign Language. Brandon is the first artist to create such an offering on an entire album.

“Whole Heart,” the project’s first single, was co-written with Ethan Hulse and Colby Wedgeworth, made its radio debut on May 12 and is confidently climbing the charts, ascending to No. 4 at radio, reaching a listening audience of 66 million to date.

Inspired by Biblical verse 1 Corinthians 13:13 “And now these three remain: faith, hope and love. But the greatest of these is love” — finds the 5-time career GRAMMY® nominee and Emmy winner reunited with producer Dan Muckala (Backstreet Boys, The Afters). Dan — referred to by friends by his last name, “Muckala” — produced Brandon’s first four albums and was largely responsible for helping him develop his initial sound.

“When we decided to work together, I put a lot of trust in him to bring his pop sensibilities to my folky, country songwriting. It set the tone for the rest of my career because we decided to break rules,” says Brandon. “I gave him carte blanche on what he wanted to do as far as the production went.”

“I’m really thankful I got to work with these producers because they all brought a little bit of unique ‘sauce’ to the record which made it bright and really well-balanced,” says Brandon. The result is a colorful, beat-heavy, pop-centric project brimming with Heath’s hallmark lyrical stylings.

Working for a year-and-a-half, he wrote more than 100 songs for Faith Hope Love Repeat — nearly double the amount of contenders he normally crafts. “I wanted this record to be strong, and I feel like it has production, songwriting and vocal muscle. I can’t wait for people to hear it.”

aith Hope Love Repeat will be available to preorder today, with fans receiving immediate downloadable bonus tracks each week. These tracks include “Whole Heart” on Friday, Sept 29, “Faith Hope Love Repeat” on Oct. 6, and “Got The Love,”  featuring labelmate Tauren Wells, on Oct. 13. Fans can visit www.brandonheath.com or People Magazine to participate.

Brandon has been introducing “Whole Heart” to live audiences across the country this summer and will tour through the fall with Tenth Avenue North. Find all of Brandon’s tour dates at www.brandonheath.com

The Faith Hope Love Repeat track listing is as follows:

10. Someone Like Me (Brandon Heath, Seth Mosley, Riley Friesen)

11. Only One In The World (Brandon Heath, Lee Thomas Miller)

He has won an Emmy Award and has been nominated for an American Music Award and five GRAMMY® awards. He has won eight GMA Dove Awards, including “Male Vocalist of the Year” (2009 and 2010), and was BMI’s 2014 Songwriter of the Year.

His award-winning songs reflect a soaring radio career that includes “I’m Not Who I Was,” “Wait and See,” the 2009 GMA Dove Award-winning Song of the Year and RIAA Platinum certified single “Give Me Your Eyes,” the eight-week chart topper “Your Love,” and “The Light In Me.”

Brandon is a Nashville native who first began writing at age 13. His music has been featured by The New York Times, Billboard, The Wall Street Journal, CBS Evening News, American Songwriter and The Discovery Channel.