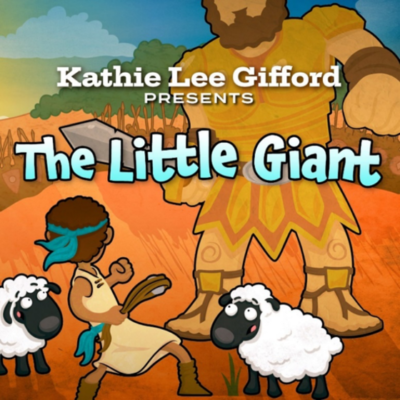 Three-time EMMY® winner Kathie Lee Gifford will unveil The Little Giant, a new recording that tells the David & Goliath story in a contemporary yet timeless way, on Sept. 29. Regis Philbin (as Jesse) and Broadway notables Aidan Gemme (as David) and Gregg Edelman (as King Saul/Goliath) among others joined voices with the celebrated television and Broadway personality who assumed the role of Sheeba, an ewe with tons of personality. The 30 minute album is filled with 13 new tunes produced by multi-platinum selling David Pomeranz and co-written by Gifford, inspired by the timeless story.

The project stems from a life-changing trip Gifford took to Israel with her husband, legendary football player and sports commentator, Frank Gifford, before he passed in 2015. “There in the valley where David defeated Goliath, Frank and I had a life-transforming experience. We all had been taught that the miracle was that a young boy took down a giant. But in reality, in those days, any shepherd was experienced in killing big animals that threatened the flock. Just as the Lord had prepared David for that one moment, we realized that God has already given each of us a stone to use. That’s the real miracle. The question then becomes ‘What is our stone and how will we use it?'” shares Gifford. “The Little Giant is dedicated to my late husband, Frank. It’s no coincidence that he had a special place in his heart for giants since he played for the New York Giants for 12 years. But more than that, when Frank and I left Israel, we each took a small stone with us and committed to use them however the Lord would lead. This project is the fulfillment of that promise.”

To pre-order The Little Giant, visit Amazon or iTunes.

About Kathie Lee Gifford:
Kathie Lee Gifford is the 3-time EMMY® winning co-host of the fourth hour of TODAY, alongside Hoda Kotb. Prior to NBC News, Gifford served as the co-host of “Live with Regis and Kathie Lee” for 15 years, where she received 11 Emmy nominations. She has written several musicals including Broadway’s “Scandalous,” which received a Tony nomination for Best Actress in 2012. Gifford also starred on Broadway in “Putting it Together” and “Annie.” Gifford has authored three NY Times bestselling books including “Just When I Thought I’d Dropped My Last Egg,” “I Can’t Believe I Said That,” and the popular children’s book “Party Animals.” Her book, “Good Gifts, A Year In The Heart of a Home” raised over $1 million for The Salvation Army. For more information, go to www.kathieleegifford.com.

About David Pomeranz:
David Pomeranz’s songs and solo recordings have sold over 40 million copies worldwide, earning him a total of 18 Gold and 22 Platinum records. He has written songs for the likes of Barry Manilow, Richie Sambora (of Bon Jovi), Ann Wilson (of Heart), Bette Midler, The Muppets, John Denver, Glen Campbell, Kenny Rogers and many others. He has an Emmy Award Nominee for his song work on television and composed the songs (with Kathie Lee Gifford) for two Stage Musicals – Off-Broadway’s “Under The Bridge” and, (along with David Friedman), the Tony-nominated Broadway Musical, “Scandalous.” For more information, go to www.davidpomeranz.com.

About New Haven Records:
New Haven Records is a Nashville-based music corporation that includes label, publishing, and film companies. For three decades, they have focused on the uniquely American genres of Black Gospel, Southern Gospel, and Country & Bluegrass Gospel. Their children’s label, New Haven Kids, features the best-selling series, A Child’s Gift of Lullabyes. New Haven’s product is distributed to the mainstream through SONY Distribution and to the Christian marketplace through Provident Music Distribution. For additional information, go to www.newhavenrecords.com.