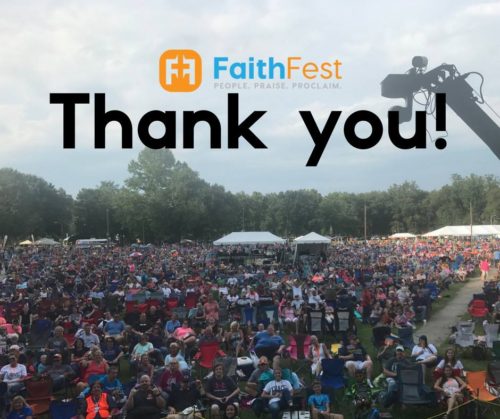 Thousands of Christian music fans covered the grounds of Wilkes Community College for the debut of FaithFest this past weekend. The crowd was reminiscent of the early days of Merlefest, the annual music festival held each spring at the college in Wilkesboro, North Carolina in memory of the lives of bluegrass artists Merle and Doc Watson. Attendance for the inaugural event was estimated at 6,000; organizers were pleased with the turnout with hopes of holding FaithFest annually.

Finding Favour opened the event and Matthew West closed out the day-long schedule of 10 artists. West said he had been looking forward to FaithFest NC 2017 and his comments indicate that he wasn’t disappointed.

“This is an amazing crowd,” he said while looking out over a large field packed with people in front of the Watson stage. West said he had prayed that FaithFest would be more than a music festival and that it would change lives. Bowing his head in prayer, West said he and his band would be singing to God, for God and because of God. He asked God to take over the lives of people in the audience.

Matt Hammitt told the crowd about leaving the group Santus Real to focus more on his wife and children. Hammitt performed a song he wrote with the theme of trusting God in the worst of times that was inspired by having a son with a life-threatening heart defect. He held up a copy of a children’s book he co-wrote and said that proceeds from sales of the book at FaithFest and elsewhere go to Whole Hearts Foundation, a non-profit organization that supports families of children with pediatric heart disease.

Other artists participating in FaithFest NC included Unspoken, Matt Hammitt, Kandace Brown, Caleb’s Crossing, Meredith Andrews, John Lewis, Jason Crabb and Phil Wickham. The event was initiated by Craig Church of Craig Church Ministries Inc. , a nonprofit evangelistic organization based in Wilkes County. Church holds revivals and conferences and engages in other missionary work around the world. He said about two years ago he felt God leading him to initiate something positive in his hometown which inspired bringing FaithFest to fruition.

Read about MerleFest 2017 in the RollingStone

Find out more about MerleFest 2017 here