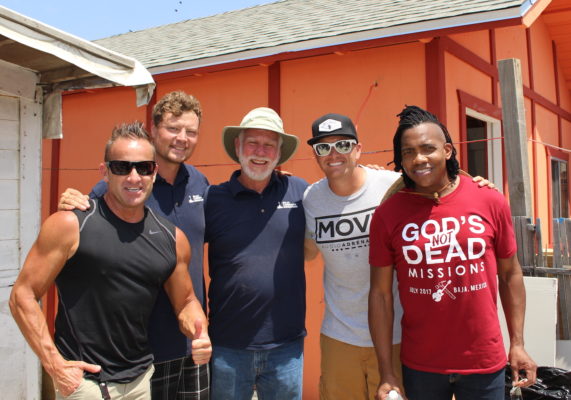 NEWSBOYS LEND A HAND IN MEXICO

Members of GRAMMY®-nominated, Platinum®-selling Newsboys took a break from their summer tour schedule to help build homes in Baja, Mexico, recently. In partnership with Baja Christian Ministries and God’s Not Dead Missions, Newsboys’ Michael Tait and Duncan Phillips joined volunteers from around the U.S. to construct two homes for disadvantaged families and lead street evangelism teams in the area. The week culminated with a community-wide fiesta hosted by the God’s Not Dead Missions team, featuring music, food and entertainment.

Partnering with Baja Christian Ministries for more than 15 years, Newsboys have helped build dozens of homes, schools and churches in the region. Throughout its history, Baja Christian Ministries has constructed over 2,000 buildings; distributed more than 200,000 Bibles and study materials to Baja residents; and assembled a network of pastors and churches for discipleship in the community.

Following their time in Baja, Mexico, Newsboys were among the headliners at last weekend’s Kingdom Bound Festival in Western New York, where they performed their latest single, “The Cross Has The Final Word,” with former bandmate Peter Furler. The group is also slated to appear at Saturday’s Kansas City Royals Faith & Family Night, as well as the Colorado Rockies Faith Day on Sunday, among other key festivals and tour dates around the country.