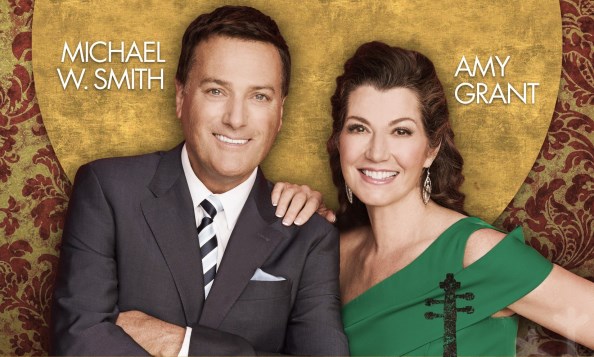 With multiple sellout crowds celebrating the season with them last year, Amy Grant and Michael W. Smith joint Christmas tours have become some of the most anticipated holiday events of the season. Combining for a vast collection of critically-acclaimed holiday albums between them, the 2017 Christmas tour will showcase selections spanning the artists’ expansive Christmas repertoires, including their most recent releases, Grant’s Tennessee Christmas, Michael W. Smith’s The Spirit of Christmas and Jordan Smith’s ’Tis The Season.

“I started looking forward to this year’s tour after the final encore of last year’s tour!” exclaims Michael W. Smith. “Performing with Amy and Jordan – in front of a full Symphony Orchestra – is about as good as it gets for me!”

“Michael, Jordan and I have been looking forward to touring together again all year!” confirms Grant. “We had so much fun together last year, and it felt like our creative gifts complemented one another in a unique way.

“As we started to plan the show, it was our goal to enhance people’s experience of the Christmas season by providing them a night of exquisite music and a message of hope,” continues Grant. “We are especially thrilled to be partnering with Balsam Hill this year and incorporating some of their beautiful pieces into our production. Creativity happens on many different levels and similarly to the music Michael, Jordan and I have recorded for the holidays, Balsam Hill’s products exists to add beauty and magic to the Christmas season.”

“I’m so looking forward to hitting the road again this year with Michael and Amy!” adds Jordan Smith. “It is always an honor to share the stage with these two legendary performers who are also such special people. This show has become one of my favorite Christmas traditions!”

In addition to the performance, and in support of their longstanding relationship with Compassion International, Michael and Amy are exclusively meeting with as many as 200 people in each city who sponsor a child through the organization prior to the concert and through the website www.meetamyandmichael.com. This “Compassion Meet & Greet” is an opportunity to learn more about the Compassion International’s child sponsorship experience and will include a photo opportunity with the artists. (Tickets to each concert must be purchased separately through the event’s normal ticketing outlets.)

“Amy and I have both sponsored children through Compassion International literally for decades,” reflects Michael. “So, I’m especially excited that we are using our time before the show to meet people who sponsor Compassion children. It seems like such a great opportunity – especially this time of year.

“Amy has a song that says, ‘It’s Going To Be A Christmas To Remember.’ That’s our goal with this night,” continues Michael. “I hope we create a memory for everyone that attends and, at the same time, we impact the lives of some very special children all over the world.”

Recently inducted into the Music City Walk of Fame in recognition of her significant contributions to Nashville and its musical heritage, Grant released Tennessee Christmas last year, marking her first all-new holiday album in nearly 20 years. With over six million Christmas records sold, her latest holiday offering includes a blend of heartfelt originals and Grant’s own spin on popular Yuletide classics, seamlessly weaving together the joy, love, laughter and even grief this season brings.

Jordan Smith released his first-ever Christmas album, ’Tis The Season, last year. The holiday recording followed his debut album Something Beautiful, which reached No. 2 on the Billboard 200, the highest ranking on the chart by any winner of a television singing competition in almost five years, making Smith the best-selling artist in the history of “The Voice.”

For more information on the upcoming tour and to purchase tickets, visit amygrant.com/tour, michaelwsmith.com/tour or jordansmithofficial.com/tour.