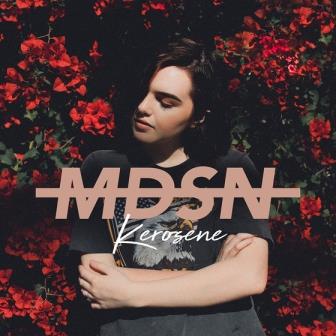 The 16-year-old, who is based in Dallas, Texas, grew up singing in church alongside her worship leader parents, David and Nicole Binion, and serving on worship teams for the 10,000-member Covenant Church.

“Watching MDSN grow as an artist and songwriter and serving her and her family on this journey is a great honor,” says Adrian Thompson, Vice President of Song & Artist Development for Integrity. “We believe she is one of the emerging voices for the next generation of worshipers… hearing God’s heart and singing a new song that travels beyond the church walls and into the streets.”

Fusing pop, EDM and acoustic styles with worshipful, praise-filled lyrics, MDSN has begun work on a new project set to release in early 2018. The “Kerosene” single, produced by Kyle Lee and co-written by MDSN with Lee and Rhyan Shirley, offers a small taste of MDSN’s joyful energy and the project to come.

“There’s no way that I could hide a love so bright, You light me up like kerosene.”

MDSN says she penned the song about “the joy of the Lord” adding, “I want it to make people happy and then have them wonder why… to be musically attractive to people who wouldn’t ordinarily be attracted to Christian music.”

Writing since elementary school, at age nine she penned a feel-good pop tune that caught the interest of Disney Channel music executives. Over the next few years, MDSN and her parents kept crossing paths with Disney reps and for a while, it seemed that a career as a pop princess might be ahead of her. But MDSN quickly decided that her heart and God’s calling were pulling her in a different direction.

“I want to see people’s lives changed,” she says. “To be an influencer for my generation and to make music that helps Christians deepen their faith while introducing others to Jesus.”

MDSN takes her first steps on this journey with “Kerosene,” available for sale/streaming through all major digital service providers and to CHR and Christian Hot AC radio stations beginning August 11 with a music video to follow.

Additional information on MDSN, including updates and links to her social media channels, is available at https://www.mdsnmusic.com.