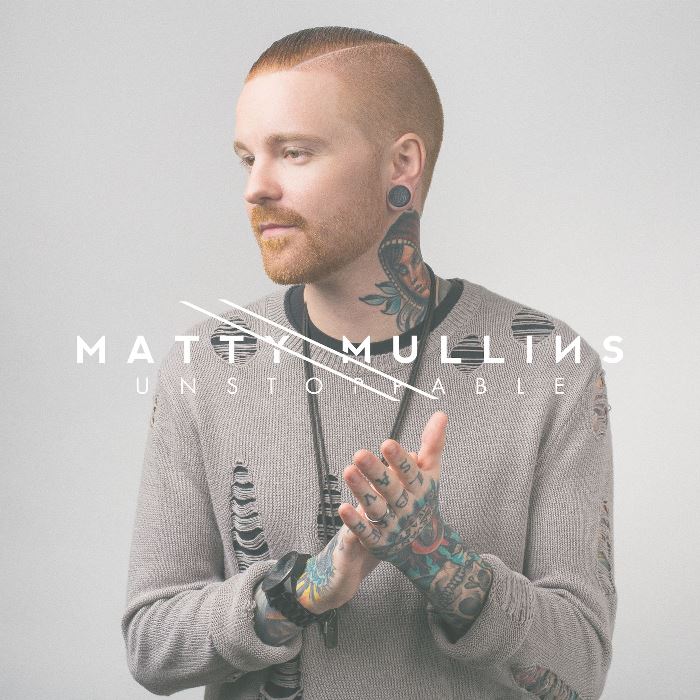 Hardly new to the music scene, Matty Mullins released his second solo album entitled Unstoppable earlier this year under BEC Recordings. Although he may be a new name to Christian music listeners, metalcore fans know Mullins from his other project, Memphis May Fire.

Even with a drift from his usual genre, Matty Mullins’ sophomore album Unstoppable stands right on up there with other Christian pop albums. The album has a mix of songs, from upbeat to slower, and worshipful to dance-worthy to fit any mood.

“Say it All” starts off the album with a synth intro. On the first listen, it’s hard to tell what could be coming on the album, but listeners can clap along to an upbeat chorus. The instrumental layering is a bit uneven as it seems that some instruments are vying to be heard above the rest. The lyrics are about our actions speaking louder than our words.

A piano brings in “I Choose You”, a song about choosing to hear the voice of God above the others that bombard us daily with messages that tell us we are less than perfect. God’s voice speaks the truth and tells us that we are forgiven. Also piano-driven, both the high and low ends of the keyboard add subtle color to “The Best is Yet to Come”. It has an incredibly catchy chorus with some brass instruments at the foundation of the music. Mullins vocals are smooth yet rhythmic throughout the song.

The title track features special guest vocalist Jordan Feliz. “Unstoppable” has an irresistible beat that maintains an electric feel throughout the song. A catchy guitar hook keeps the music moving under the strong vocals of Feliz and Mullins. The music video is a lot of fun too, so check it out! {insert music video link here}

This album as a whole is chock-full of musical variety. For example, the music to “Brand New Fire” begins with a baseline and drums. A guitar is then added and higher pitched piano adds a sprinkling of perfection to this musical ensemble. Mullins’ clear cut vocals sing the lyrics “I was stained and ashamed of who I’ve been but then You wrapped Your arms around me”, which talk about new life in Christ.

“Christ be Magnified” is a pure worship song with some powerful lyrics in the bridge: “Every knee will bow, every tongue confess, He is Lord, He is Lord”.

“You Can” is definitely a stand out track because, in addition to good lyrics, the music incorporates a variety of instruments, including string synths. The vocal performance on this song is the best of the whole album. “Go the Distance”, a song about Jesus showing his love in dying for us, is another memorable song. “Who am I full of sin and full of pride that You would leave heaven and glory to write me back into Your story?” are honest lyrics that marvel at the sacrificial love of Christ.

A toe tapping rhythm drives The Great Unknown, which Mullins wrote with Micah Kuiper of Hawk Nelson. The chorus is a prayer for God to take us out of our comfort zone with the refrain of “Lord take me somewhere my heart has to grow. You lead, I’ll follow into the unknown.”

The album closes with a prayer. Co-written by Matthew West, “Until I need You” is a song of surrendering everything to Christ. “This is the prayer I pray, take it all away until I need You and Nothing Else, Nothing else” are lyrics from the second verse. A steady acoustic guitar lies at the heart of the song, and to bring a strong ending to the album Mullins sings the refrain stripped down of musical instruments before bringing back a full ensemble.

This album differs from Mullins’ first release in many ways. First of all, many of the lyrics on this project are rather simple and convey common ideas that other CCM artists write about in their songs. There are some thought-provoking lyrics in the songs, but most of them lack originality. Secondly, the music is geared more toward the pop genre, whereas in his first solo release listeners heard a lot of influence of the style of Memphis May Fire. Matty Mullins uses a variety of instruments and each song varies in its instrumentation, which brings an element of surprise to each song. At times it can be difficult to pick out which instrument should be heard above the rest, but other than those moments the choices in instruments is well done.

Matty Mullins has a beautiful voice, but his vocals on Unstoppable leave me a bit dissatisfied. In his Memphis May Fire songs, he sings with more passion and intensity than can be found on this album. There are some points in “You Can” and “Until I Need You” where he gets close to belting it out, but there is a sense that he holds some of that vocal power back.

Also different from other artists is the lack of theme that the songs share as a cohesive album. Mullins wrote the album not intending to have a theme at the center, so listeners can find their own meaning in the songs.

Overall, Unstoppable is a good album for Matty’s first fully “pop” genre project. Listeners will enjoy his catchy melodies and lyrics for years to come, and I hope that he’ll continue to put out music in this genre.