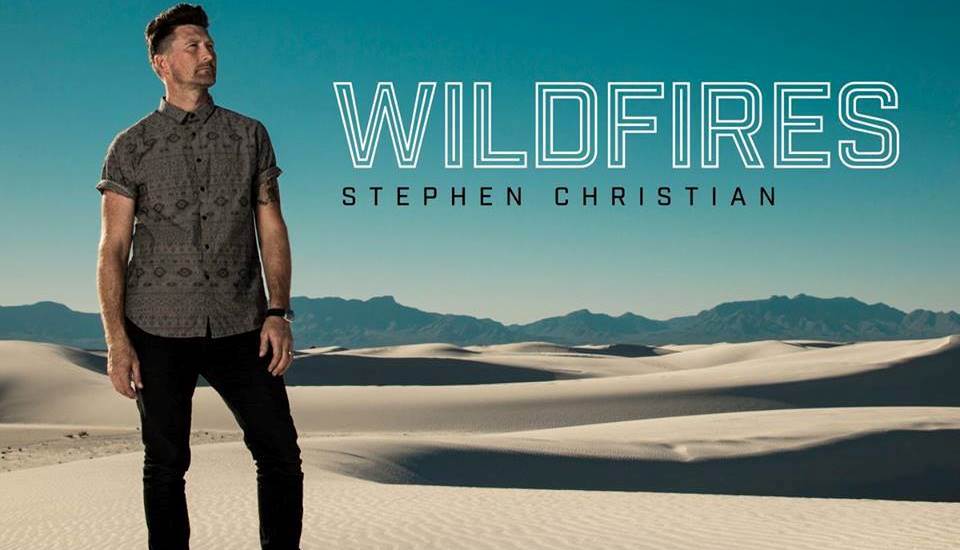 When iconic rock band Anberlin dissolved in 2014, many fans wondered what was next for frontman Stephen Christian. Little did they know that the energetic performer would become a worship pastor in the years after Anberlin. The job did not just fall into his lap, though. Christian recalls the months after the band broke up as some of the hardest of his life. He had his own podcast and also began to write songs for other artists when he realized that these songs were truly meant for his own project- a worship album. Known for his painfully personal lyrics, these songs were written in the months following the end of Anberlin, as Christian and his family transitioned from Nashville to New Mexico where he leads worship at Calvary Church in Albuquerque.

The songs on Wildfires chronicle his journey of finding a secure hope in difficult times and of trusting in God when things are uncertain. These 10 tracks are packed with musical surprises, lyrical genius, and the incredible vocal performance that Stephen Christian is known for.

“Gloria” is the track that comes with the pre-order (check out the lyric video below). With lively music, this is a typical worship song that would be sung in church. Lyrically poetic “Wide-Eyed Wonder” is about the marvelous love of God. The chorus expresses humble awe in the lyrics “Let my heart forever stay in awe of who you are/ I want to live amazed”.

“Light Rise Up” has a tom-driven beat that remains steady throughout the song as other instruments weave in and out to create a balanced ensemble. The lyrics are packed with content and the bridge is where Christian places the album title into the lyrics “Let Your praises come ignite/ send Your glory far and wide/ like a wildfire, wildfire”.

Melodic “Hope Has a Name” is a worship anthem, much like the style of Chris Tomlin’s worship songs. I have to give a special nod to the exceptional vocal performance on this track. Stephen did a fantastic job on seamless transitions between phrases. “He is Anthem” is another upbeat track that features a toe-tapping beat and rhythmic verse. The lyrics and music together inspire feelings of hope.

“Atmosphere” comes in on the slower side. The song is centered on the vocals to calmly set the somber mood of being in the presence of God. The ambient effects behind the vocals complement the harmonies of guest singer Sarah Reeves’ voice along with Christian’s. In fact, Reeves’ background vocal magic brings an angelic feel to the song as well. It’s a quiet and well-produced track, although the drum track gets a bit too loud in the chorus.

“Undone” is a raw and personal song by Christian written to God as a song of surrender. Christian describes the painful process of laying down his own plans and prays for God’s desires to become his. The vocal effects and layering in the bridge are interesting, where Christian sings “Let us be of one mind/ let us be of one heart, let us be of one soul/ let us be one”.

“One More Moment” brings listeners into a personal moment of worship. The chorus is a steady crescendo into a passionately sung chorus. Lyrics from the verse cleverly describe the love of God as an ocean and a single drop: “how immense is your love/it’s small enough to find me/pouring oceans of grace/one drop satisfies me”.

“All I Need to Know” closes out the album with Christian’s heartfelt and hopeful lyrics. This track is the summation of his journey of transition out of Anberlin into a time of uncertainty and wrestling with God. “Even though I’m scared/ I know You’re still there/ That’s all I need to know” are lyrics that convey both the struggle and the trust. The music goes so well with the lyrics and it brings such a satisfying ending to the album. “With all that I am, I’m trusting You, bring me through” are powerfully hopeful lyrics from the bridge.

As Stephen Christian’s first worship project, Wildfires is the culmination of his musical career thus far. He’s had 12 years of being in a rock band under his belt, done side projects like Anchor and Braille, and has been at his worship leader position for over two years. All of those influences and experiences have contributed to the high quality of this album, both in music and in verse.

There are times on the album when listeners can tell that although he has left Anberlin, his time in Anberlin has not left him. Expect to hear incredible vocal performance throughout the entire album, and listen out for heart-stirring and worship-inspiring lyrics on top of engaging and tasteful instrumental ensembles. Stephen has always been candid about personal struggles in his songwriting, and this release is no different. Many can relate to feelings of uncertainty and doubt in the midst of trying times, and Wildfires inspires worship and a spirit of thankfulness and trust as the songs remind us that God is good and his ways are higher than our own.