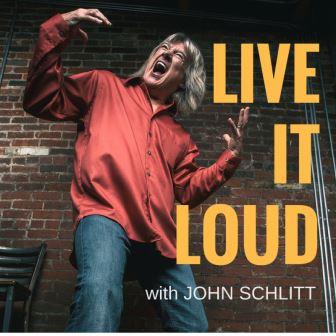 this week from Thursday, June 15 through Sunday, June 18, 2017. The singer/songwriter and radio host will interview musician and actor Keith Thibodeaux, the drummer for Christian rock band David & The Giants, as well as the original “Little Ricky” from the classic TV show I Love Lucy.
The Live It Loud program is syndicated by the NRT (New Release Today) Radio Syndication Network
and is aired on numerous radio stations and online outlets from coast to coast. The show features Schlitt’s unique perspective on songs from the early days of Christian rock, along with exclusive interviews with the songwriters and performers who championed the music that changed a generation for Christ.
Each hour-long episode of Live It Loud includes a mix of classic Christian rock songs, along with
interviews with the artists and writers who created them. Schlitt also offers a brief devotion and shares a story about a person or organization that is “living it loud” for the Kingdom.
The show’s first season has included interviews with such Christian rock pioneers as Rick Cua, Phil Keaggy, Geoff Moore, Eddie DeGarmo (DeGarmo and Key), Rick Florian and Billy Smiley (Whiteheart), Bob Farrell (Farrell and Farrell), Bob Hartman and John Lawry (Petra), John Elefante (Mastedon and mainstream group Kansas), David Huff (David and the Giants) and video producer Steve Yake.
“When we first heard of the opportunity to work with John Schlitt, our answer was immediately ‘yes,'” says Kevin McNeese, director of the NRT Radio Syndication Network. “John has decades of experience in the industry and brings unmatched energy and passion to any conversation he’s engaged in. To hear him sit down and talk with other creatives that have had tremendous impact on Christian music’s history is…a special treat, week in and week out. We’re honored to be bringing his show to radio and add Live It Loud to our growing catalog of quality, free programming for radio.”
Starting next week, Live It Loud will go on hiatus while the second season of the radio program is recorded. For more encouragement to live your faith out loud, Schlitt invites fans to visit the Live It Loud devotions page on his website, located at johnschlittministries.org.
“Live It Loud has been a fascinating experience for me so far,” says Schlitt. “I wanted to find out from my artist friends how God called them and what keeps them going after years of ministry and creating music. Many of their stories have never been told like this. It has been a great encouragement to me, and I hope our listeners have been blessed as well. With the upcoming second season of Live It Loud, I’m excited to once again honor those who paved the way for the next generation of Christian artists, and to introduce a new generation to some of the greatest rock music on the planet! The message in these songs still has the power to change people’s lives.”
Live It Loud is a project of John Schlitt Ministries. For more information, visit johnschlittministries.org or email questions to
Stations can sign up to air Live It Loud for free at nrtsyndication.com.