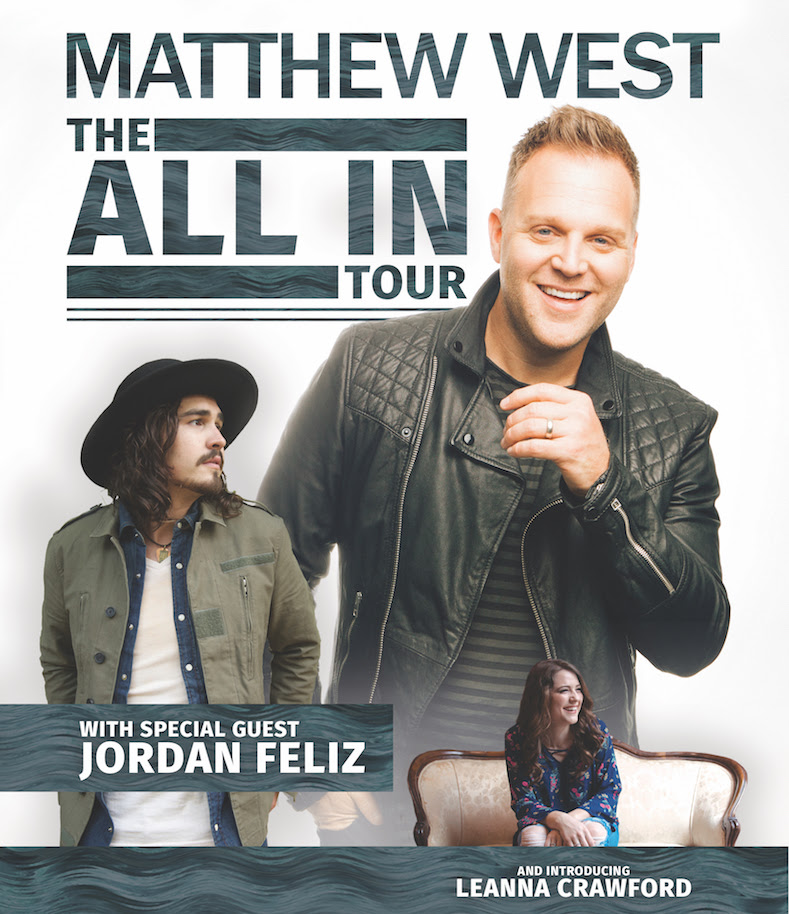 Matthew West Is Going ‘All In’ For Fall Headline Tour

Hit singer/songwriter and GRAMMY®-nominated fan favorite Matthew West is set to embark on his headlining ALL IN Tour this fall. Visiting over 30 cities nationwide, the tour will feature special guest Dove Award-winner Jordan Feliz and will introduce singer/songwriter Leanna Crawford.

“I absolutely love writing songs, and I love watching those songs come to life in the recording studio,” West says. “But it’s getting on the bus, hopping on stage in city after city and carrying that music to a live audience night after night that completes the creative circle. That’s why I do this tour or any other—in hopes that people who are hurting will find a much-needed musical reminder that God loves changing lives. We’re going ‘ALL IN’ with that message this fall and I can’t wait!”

“We are working hard to make this tour a special one,” West adds. “From the time folks walk in the door to the time they leave, I want fans to be immersed in and experience ALL IN.”

In addition to West’s ALL IN experience, fans will hear some of his much-anticipated new music, including collaborations with his special guests.

“I’m also excited to tour with my friend Jordan Feliz,” West continues. “He and I wrote a song together for my new record and a friendship was forged. In addition, I’ve discovered an amazingly talented newcomer, Leanna Crawford. She’s going to join me onstage each night and will no doubt blow people away.”

Tickets for the ALL IN Fall Tour go on sale Tuesday, June 13. For a complete list of cities and dates, visit matthewwest.com.