Jimmy Kimmel’s studio audience came prepared to enjoy a live show but they were transformed into a live gospel choir before the night was through.  The Irish rock band U2 appeared on “Jimmy Kimmel Live” for a surprise, emotional performance of “I Still Haven’t Found What I’m Looking For,” in honor of the Manchester terror victims. The band members live only an hour’s flight away from the city and were deeply affected by the horrific attack.

During the interview with Jimmy Kimmel, lead singer Bono made this statement about those responsible for the attack, “They hate music. They hate women. They even hate little girls.  They hate everything that we love. And the worst of humanity was on view in Manchester.” You can watch the full interview with Kimmel here.

So, U2 decided to fight the hate with a little gospel music. “We want to play for you now a gospel song with a restless spirit,” Bono said as he introduced the song. Choir members were planted throughout the studio and joined in to turn the entire studio into a moving gospel performance. Watch the live performance on the video above as well as an excerpt from the interview with Kimmel. 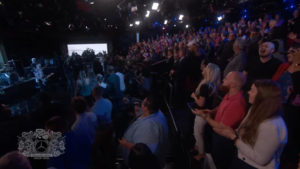