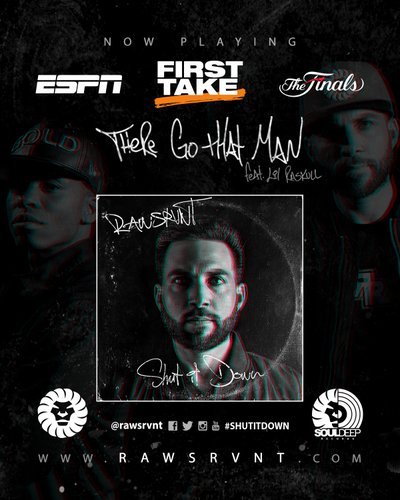 “Mama, there goes that man” is a phrase made famous by NBA-player-turned-broadcaster Mark Jackson. And starting in June, a song by Rawsrvnt using a similar expression will be featured on ESPN’s “First Take” show as they broadcast from each of the home cities of the 2017 NBA Finals.

“I’m so happy to be partnering up again with one my favorite television networks – especially on such a high profile stage,” Rawsrvnt said.

“There Go That Man” is from Rawsrvnt’s recently-released Shut It Down EP and features Houston rap veteran Lil Raskull. This licensing deal is actually a repeat performance by the duo. In January of 2016 “First Take” also featured their “Game Changer” track on the show.

Rawsrvnt’s music has many connections to the sports world. In 2015 FOX Sports played his “My Statement / The End” song during several NBA game broadcasts, “Go Hard” appeared in a CBS telecast of a Miami Dolphins game, and UFC fighter Nate Marquardt named “The Almighty” to his Christian hip hop playlist.

Order Rawsrvnt’s Shut It Down EP on iTunes for only $5.99.

Download or Stream Rawsrvnt’s Shut It Down EP at your favorite digital outlet.

Buy Shut It Down here