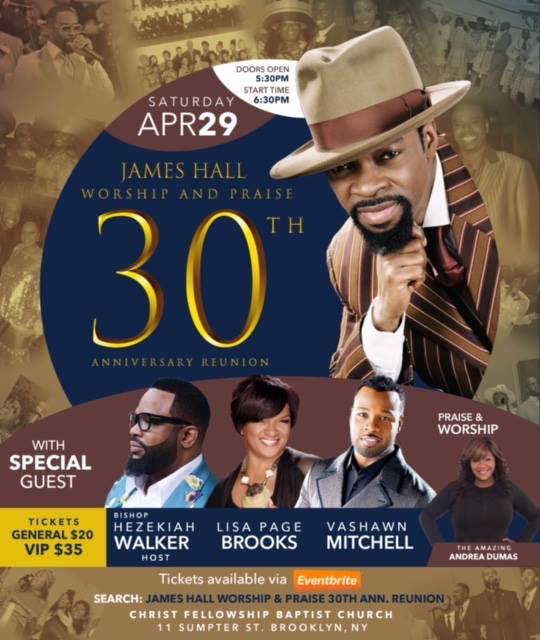 One of New York City’s finest musical treasures, James Hall and his Stellar and Dove Award nominated Brooklyn-based choir Worship and Praise – who are known across the East Coast for their vocal somersaults and breathtaking crescendos are celebrating 30 years in the music business with a reunion concert.

The star-studded event is scheduled for this Saturday, April 29th at Christ Fellowship Baptist Church, located at 11 Sumter Street, Brooklyn, New York. General admission is $20.00 and VIP is $35.00. Tickets can be purchased via Eventbrite (https://www.eventbrite.com/e/james-hall-worship-praise-30th-ann-reunion-tickets-33611604213?aff=eac2).

The choir’s last two albums both distributed by Entertainment One garnered both critical and consumer acclaim. 2012’s Trip Down Memory Lane, debuted on two Billboard charts, reaching No. 6 on Billboard’s Top Gospel Albums and No. 49 on the Independent Albums chart, while 2015’s New Era, the choirs most successful album to date, debuted at No. 2 on the Top Gospel Albums chart and No. 23 on the Top Independent Albums chart. This project was highlighted by the ultimate passing of noted musician Melvin Crispell.