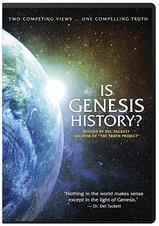 “IS GENESIS HISTORY?” Cracks the Top 10 on the iTunes Store Indie Film Chart

After a wildly successful one-night theatrical event that earned two encore performances, the documentary feature IS GENESIS HISTORY? holds the #10 spot on the iTunes Store Independent Films Chart for the week ending April 16*. The film is also ranked #4 on Amazon’s Best Selling Documentary DVDs**.  IS GENESIS HISTORY? released on DVD and VOD on April 11 and will continue to roll out in additional formats during the coming weeks.

About the film: Through on-location interviews with veteran scientists, IS GENESIS HISTORY? examines the two conflicting histories on the origins of the Earth and the Universe. With an immense body of new research and discoveries, IS GENESIS HISTORY? unpacks and presents positive, evidence-based arguments for the credibility of the Bible as accurate history.

In the documentary, host Dr. Del Tackett introduces viewers to experts in a variety of schools of science and thought, including biology, geology, astronomy, archaeology, technology and paleontology. Tackett and the film crew travel the world, examining scientific data at its source from the perspective of the history recorded in Genesis. This journey explores questions such as the extinction of the dinosaurs, the timeline of natural history, the design of the universe, and the reality of a global flood.

About the theatrical release: The film launched in theaters on February 23 as a one-night theatrical event through Compass Cinema and Fathom Events. Over 143,000 people purchased tickets, making IS GENESIS HISTORY? the highest grossing and #1 per-screen average in the country that date. (BoxOfficeMojo.com). This outpouring of support launched two additional encore screenings that ultimately earned the film a whopping $2.7M in just three 7:00pm screenings.
Now, the film has cracked the Top 10 on the iTunes Store for Indie Films, rounding out an iTunes Store chart that includes acclaimed films such as MANCHESTER BY THE SEA, MOONLIGHT, and 20th CENTURY WOMEN.
From the filmmaker:  Director and Producer Thomas Purifoy Jr. states, “We continue to be encouraged by the outpouring of interest in the market for IS GENESIS HISTORY?.  Questions regarding our origins matter, and we hope the film continues to find an audience that wants to ask the tough questions of life, science and faith.”
http://www.isgenesishistory.com