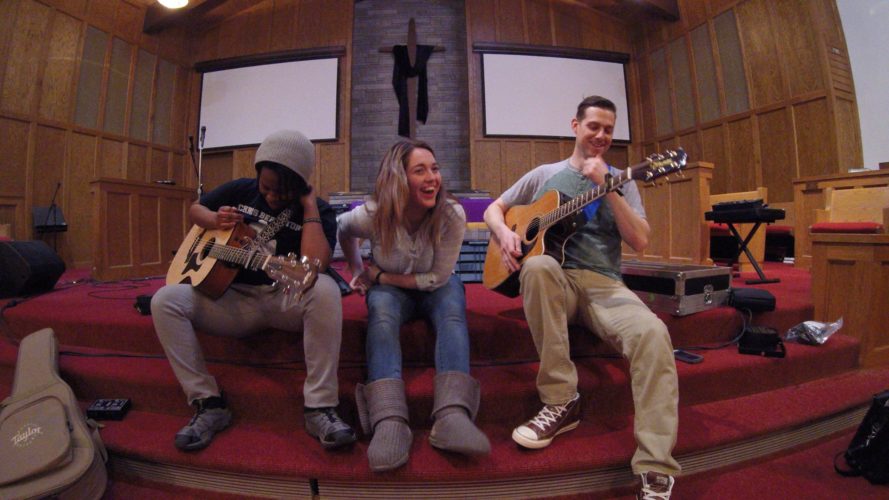 It was a peaceful Saturday evening at the Fresh Grounds Coffeehouse in Greenville, PA.  Friends had gathered to catch up on life, enjoy a warm hand-crafted beverage, and experience a night of worship and stories.  The night began with the incomparable poetry of Egypt Speaks.  She immediately caught the attention of everyone listening with her warm and captivating style of delivery.  Not only does she speak these words of encouragement and inspiration with such flawless precision, but she also engages the audience, asking how they’re doing and including random details from the surrounding environment.

Throughout Egypt’s set, the common thread running from poem to poem was the reminder of God’s love for His people, no matter where they are or how far away God feels.  He has never left us nor forsaken us.  One poem, “Dear God,” was a letter written from Egypt to her Father, reminiscing about how they used to dance together, and reflecting on the bittersweet process of maturing and losing that child-like wonder.  It was a heartfelt cry to recapture that endearing sense of closeness, and the audience was blessed to be eavesdropping on this intimate conversation between a girl and her Dad.

Egypt ended by telling the story of Aiden, a young autistic boy that she used to babysit.  Aiden never spoke, but the one thing that would always calm him down was music, so she would often play guitar for him.  She told of one night in particular when Aiden’s mom called her to come over.  As it turned out, Aiden’s father had left the family earlier that day, and though Aiden didn’t fully understand all that was going on, he understood the heartbreak of not being wanted.  Egypt played for those gathered at Fresh Grounds what she called “Aiden’s Bedtime Story,” a medley of a few Twenty-One Pilots songs.  All that to say that even though our earthly father may abandon us, we have a Father in Heaven who never will.

Next up was Dominick Cox of Driven 11 ministries.  Before he began, he invited to the stage Kendra, a local young woman who played a fun song on her ukulele and brought a smile to everyone’s face.  He then brought Andrea to the stage.  Andrea is a worship leader who was with them for this tour.  They started out by bringing everyone’s focus to God with a time of worship, singing “Nothing but the Blood.”  Dominick then continued with his song “Glory to His Name,” beginning and ending with some impressive finger picking.

While some musicians may be in the business for the attention or fame, Dominick explained he felt this was God’s calling on his life, to inspire and encourage faith in action through his music and work in ministry.  Following this theme, the next song was “You Are the Great Commission.”  Dominick began with just the melody on the guitar, the drum track introduced a moment later, and his strong baritone voice ringing out.

Breaking the seriousness for a bit, “The Fight Was Never Mine” started with a funky drum beat and some fun guitar licks.  This song definitely had some heads bobbing and toes tapping.  Keeping with the same theme, Dominick launched into a story about his week leading up to leaving for the tour.  It was a week full of spiritual attack, including hitting two deer and other car troubles that would leave his wife and children without a car while he was gone.  However, through the kindness of family, they were able to borrow a car.  Dominick felt that perhaps God was asking him who is in control.  The whole experience was a great reminder that God is bigger than all of our problems, and can be trusted to provide our every need, a great lesson that everyone can take to heart.

After playing a Garth Brooks song for a local woman who had requested it, Dominick told the story of his oldest child’s health scare as a newborn.  While the doctors were doing test after test, struggling to see any improvement, God spoke gently to Dominick, reminding him that we should hold our children in the light of our Father’s love.  The doctors did one last test, the results of which would determine if the girl was improving or would to be moved to a different facility for more specialized care.  As they waited for the results, Dominick and his wife literally held their daughter under the light and prayed for her, dedicating her to God and asking Him to intervene.  The results finally came back and showed signs of improvement, granting a sense of gratitude and relief.

Dominick also told the story of his boys learning to play baseball.  At first they weren’t sure what to do, and would just stand out in left field.  Dominick encouraged them to hold up their gloves and keep their eye on the ball, reminding them that they would eventually make a play.  He then made the analogy to our lives, and how it’s kind of like we’re just standing out in left field, wondering what God’s plan is for our lives.  But if we stand in His will long enough, our hands lifted in praise, the ball will eventually connect with our glove.  We’ll make a play that makes a difference, and things will finally begin to make sense.  After this, Dominick played “Left Field,” the title track from his recent EP.

After briefly speaking about a child sponsorship program, Food for the Hungry, and encouraging the people in attendance to consider sponsoring a child, he prayed over the photos of the children that were set out on tables throughout the coffeehouse.  The night then ended as it had begun, with a time of worship, singing “Amazing Grace (My Chains Are Gone)” and “Holy Spirit.”  Egypt made her way back to the stage at this time, her poetry intermingling with the verses of the songs, a beautifully woven tapestry comprised of these different forms of worship.  This night of worship and stories left everyone with a renewed sense of faith and a great reminder that they have a Heavenly Father who loves them unconditionally.