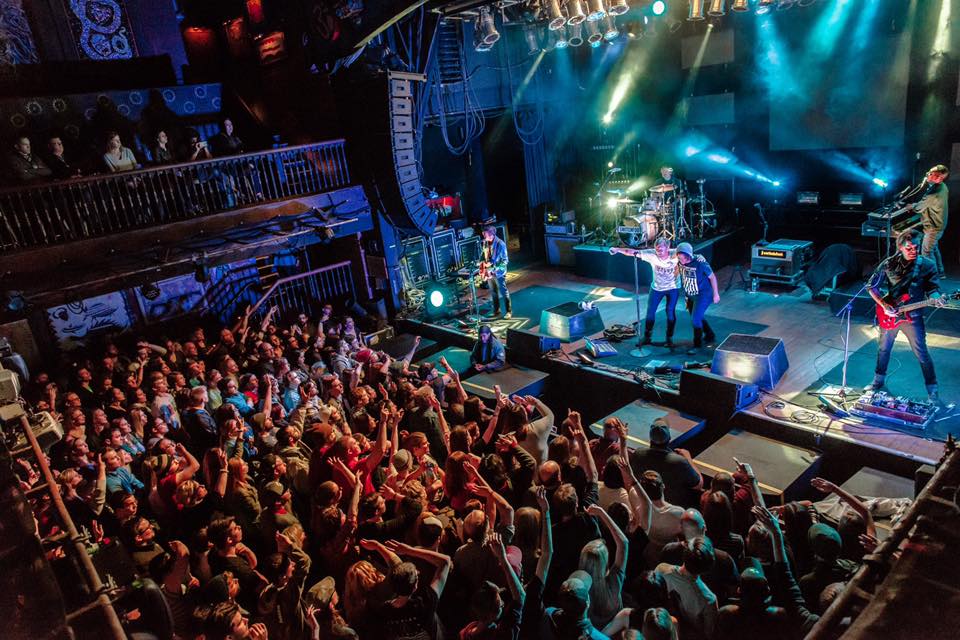 Relient K and Switchfoot Bring Down the House in Cleveland, OH

The air in the Cleveland House of Blues was charged with an electric energy as the crowd eagerly awaited the arrival of their favorite bands.  Before long, the screen running advertisements arose to reveal a carefree summer day.  The stage was adorned with lawn chairs and a grill, with a few trumpets thrown in for good measure.  Hometown favorites Relient K walked on stage amidst many enthusiastic cheers.  The band launched right in to “Bummin,” the bass reverberating throughout the room, echoing in everyone’s heartbeats.

They continued with “Who I Am Hates Who I’ve Been,” Matt Thiessen beginning with a piano intro.  At one point in the song, the instruments dropped to barely a whisper, allowing the choir of audience members to ring out.  Relient K kept things going with “Boomerang,” the cool groove imbuing the song with a fun energy.  During Matthew Hoopes’ wicked guitar solo, Matt Thiessen jumped up onto the drum riser, grabbing a stick and adding some percussiveness.

After a few more songs, Matt Thiessen spoke for a moment about the importance of family and how much the support of their families has meant to the members of the band.  Since this was a relatively local show for them, he also briefly introduced the family members in attendance.  He then dedicated the next song, “I Need You,” to their families.  Being close to the end of the tour, Matt also reflected on a few favorite memories from their time on the road (including an interesting ritual involving a red pepper, which would later make an on-stage appearance).  Matt then spoke a bit about Cure International, the main sponsor of this tour.  Cure International helps fund surgeries for children all over the world whose families otherwise would not be able to afford the procedures.  This led into one of the band’s most recent songs, “Air for Free.”

The band played several more fan favorites, including “Candy Hearts” and “Don’t Blink” before ending with “Deathbed,” a bittersweet and poignant reflection of someone at the end of their life, and the light of hope that Jesus can bring, regardless of when a person turns to Him.  Jon Foreman even joined in, bringing Relient K’s set to a strong finish.

After a brief intermission, it was then Switchfoot’s turn to rock the crowd.  And rock they did, starting right off with the energetic “Holy Water.”  They kept the audience engaged by continuing with the classic “Meant to Live,” the audience members singing their hearts out.  Next up was “Float,” which allowed Tim Foreman to showcase his skills on the bass, and also included a disco ball and cascading bubbles floating from the sides of the stage.  The next song began with Jon Foreman alone on the guitar, the sweet opening riff of “Where the Light Shines Through” dancing through the speakers.  Scattered across the stage were several stands with single light bulbs atop, serving to highlight the song’s message.  Once the rest of the band joined in, Drew Shirley took off with an impressive guitar solo.  After the brief musical journey, the music once again became subdued, allowing the myriad voices to soar.

During “Love Alone is Worth the Fight,” Jon decided to jump down from the stage and wander among the crowd, this gesture speaking volumes about the bands’ approachable and personable nature.  After the song came to an end, Jon then spoke for a few moments on the subject of fear and how it is not a good driver for the vehicle of our lives.  Because of the hope that can be found in a relationship with our Father, the Healer of Souls, we no longer need to live in fear.  This was the perfect lead-in to the old favorite “Only Hope.”

“Sound” definitely brought the house down, and even featured special guest and friend of the band, Cleveland native Egypt Speaks.  About halfway through the song, Jon invited her to the stage, and she came running out to join the band, guitar strings blazing.  Egypt was a very engaging performer, interacting with the crowd as well as each member of the band, including a moment with Chad Butler on the drum riser and a rather epic leap back onto the stage below.  After much applause and cheering, Egypt was invited back to sing during “Where I Belong,” a heartfelt and moving end to the show.  To encapsulate the energy and emotion in the room, the song ended in a shower of confetti, red and white raining from the sky.

The band exited the stage to such enthusiastic appreciation, and soon the chant for more music began.  Switchfoot did not disappoint, and they walked back on stage but a moment later, once again selecting an old-school favorite with “Gone.”  The band was clearly having just as much fun as the audience, Jon Foreman even jumping up onto the bass drum.  Much to the crowd’s delight, Switchfoot kept going and played “Live It Well,” in “campfire style” as Jon described it.  They even threw in a brief strain of “Hope is the Anthem.”  Before playing one last song, Jon gave the audience a bit of insight into his songwriting, saying that often times the songs will start from a dark place, but always end up heading towards the light, shining some hope in an often dark world.  The band wrapped up the night by playing “Dare You to Move,” with a final blast of confetti punctuating an evening full of hope and rock ‘n roll, and every face brightened by a warm smile before heading back into the stark cold of winter.