Sidewalk Prophets continues on the road with their spring leg of “The Prodigal Tour.” Sharing their hit music, energetic live performance, and thought-provoking creativity around the U.S. in 43 markets, each tour stop was carefully selected by their fans.

Additionally, the band is proud to announce a new tour partnership with Anderson University, the Indiana-based college where the band originally formed. “Anderson University is where I found my true voice,” shares Sidewalk Prophets’ Dave Frey. “We love this school and are so excited to let others know about it!”

Anderson University counts Dave Frey among their alumni — people who found their voice and their calling during their time at AU. This spring, the school is partnering with Sidewalk Prophets for the Find Your Voice Campaign. At each concert date, high school juniors and seniors will be invited to learn more about Anderson University and how they can find their voices at AU. As part of the campaign, AU is giving away one scholarship valued at $20,000 — payable over four years. The scholarship winner will be announced at the conclusion of the tour.

“The Prodigal Tour” sets itself apart from other tours as the band has created what they are calling a “immersive concert experience.” The centerpiece of this tour is Wander Creative’s suspenseful yet powerful short film, “The Prodigal,” which was written by Sidewalk Prophets co-founder Ben McDonald along with Matt Hadley. Along with hearing their latest hit singles “Prodigal” and “To Live Is Christ,” other songs fans will be sure to hear live are “The Words I Would Say,” “You Love Me Anyway,” “Live Like That,” “Save My Life,” “Keep Making Me,” “Help Me Find It,” as well as their current single at radio, “Impossible,” and many more. 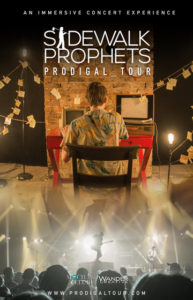 This interactive experience tour also offers unique attention to detail. Audience members will see from the moment they walk in the venue that the entire building has been transformed to take them on a journey, weaving together scenes from the short film with the band’s music. The night culminates in a powerful moment of prayer for the lost.

“The music, the effects, the message….it was so engaging you felt as though you were part of the production. This is a must see for everyone, you will enjoy every second, and wish it would have continued all night.” – Robert Lawson (event attendee)

Not only is the band working hard to deliver a great experience on the tour but they also desire to deliver an affordable experience. Tickets for the tour are offered at different price levels:

$10 General Admission
* your ticket to the show

$25 Early Entry FastPass
* Includes: your ticket to the show, exclusive Early Entry FastPass (gets you in the doors approximately 90 minutes prior to showtime to obtain the best seats), PLUS receive access to join the band for their nightly pre-show devotionals

$100 – VIP After Party FastPass
* Includes: your ticket to the show, a limited edition autographed tour poster, the exclusive Early Entry FastPass and VIP access to join the band for their nightly pre-show devotionals. PLUS, receive exclusive access to the tour’s VIP After Party which includes private hang-time with the band, snacks, and an intimate acoustic mini-concert!