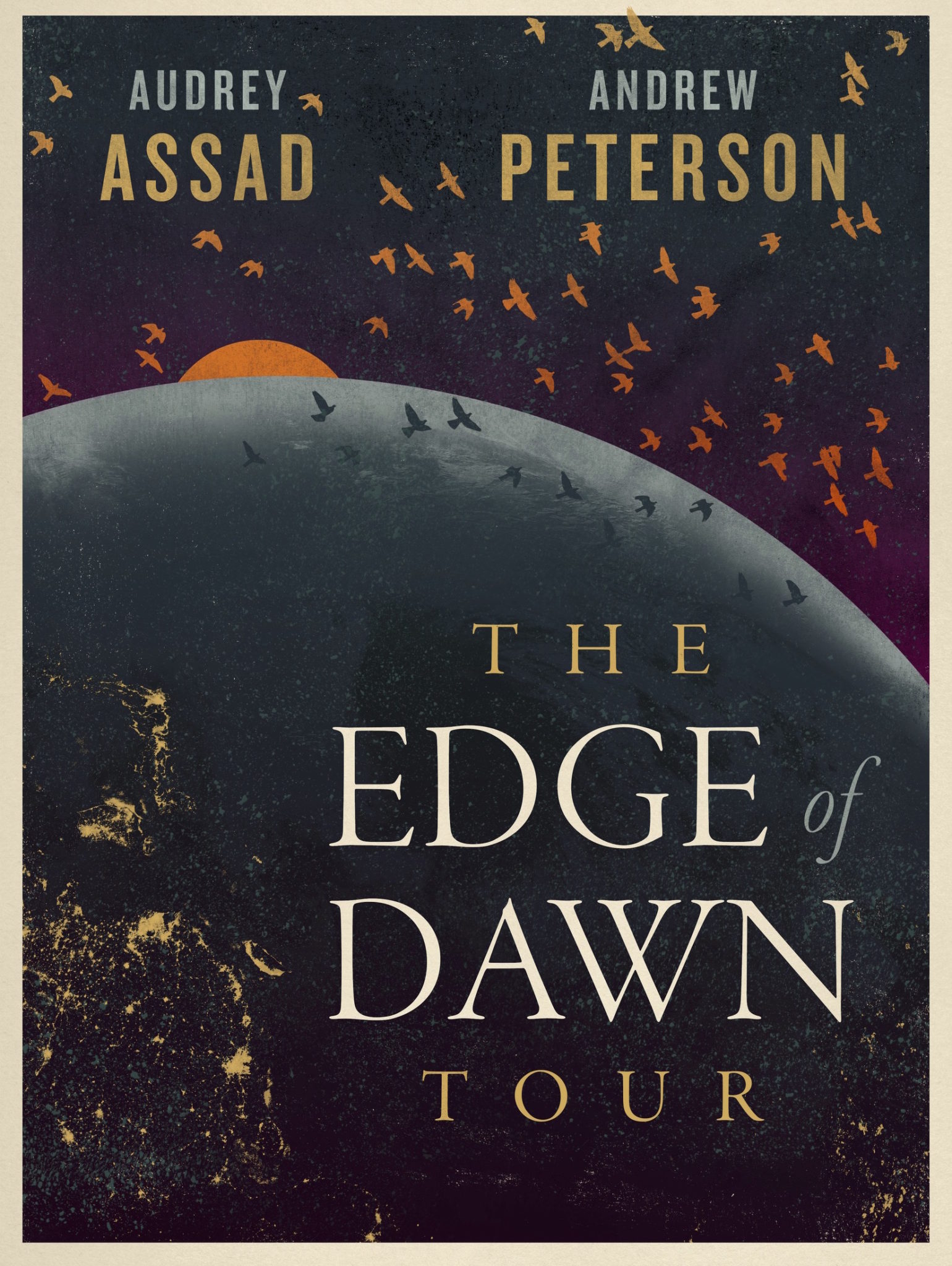 Critically lauded singers, songwriters and authors Audrey Assad and Andrew Peterson launch “The Edge of Dawn Tour” Feb. 25 in Richardson, TX. The multi-state, multi-denominational church tour will run through late March and will feature new music and fan favorites from each of these artist’s celebrated song repertoire.

“I can’t wait to play music with a songwriter for whom I have so much respect,” says Assad. “Resurrection is a story I need to learn afresh, and I think telling it through music with Andrew will be a beautiful way to enter in this year.”

“I’ve been a fan of Audrey’s music for a long time, so getting to share a band and a stage with her will be a huge honor,” says Peterson. “The fact that we’re doing this tour with a Resurrection theme makes it even better.”

Assad, whose cover of Pink Floyd’s “Wish You Were Here” was featured on the fall season opener of NBC’s hit show Timeless at 41:45 into the episode, will play songs on this tour from her five-star acclaimed and No. 1 selling Adult Contemporary (CMTA / SoundScan) album, Inheritance, released last year on Fortunate Fall Records with Tone Tree Music distribution. The album, as well as the Inheritance Deluxe Edition released last fall, features a collection of hymns and original songs that both pay homage to her childhood heritage and to her Catholic faith and charismatic spirituality.

Co-producing Inheritance with Daniel James (Canon Blue, Joy Williams, Among Savages), Assad’s current album projects a unique soundscape through a cinematic-styled approach featuring lush textures and wide, expansive rhythms that allow her voice to glide effortlessly over a diverse landscape of prayerful contemplation. Named “one of the best albums of 2016” and “an invaluable gift” by critics, Inheritance includes the original song “Even Unto Death,” which was written after Assad heard of yet another martyrdom in the Middle East and has been lauded as a Top 20 song of 2016 by Worship Leader. The album also features “It Is Well With My Soul,” a special dedication to honor Audrey’s late grandmother, “Holy, Holy, Holy,” “New Every Morning,” “It Is Well With My Soul,” “Ubi Caritas” and “Be Thou My Vision.”

Peterson, who is one of Christian music’s most prolific and thought provoking singer-songwriters, will play songs from his latest Centricity Music project, The Burning Edge of Dawn, which debuted at No. 2 on Billboard’s Current Contemporary Christian Top Albums Chart and marks the highest chart debut of his career. Produced by Gabe Scott, Ben Shive and Joe Causey, the full-length album features joyful songs delivering the heart-rending lyrics that Peterson fans have always enjoyed. CCM Magazine praises the album’s “powerful analogies of God and a Godward faith” while NewReleaseToday.com calls it “an artistic feat” and Phantom Tollbooth hails it as “supremely up-lifting.”

In addition to the title track, The Burning Edge of Dawn features a song written for Peterson’s wife, Jamie (“My One Safe Place”), and his daughter, Skye (“Be Kind To Yourself”), while “The Rain Keeps Falling” features singer-songwriter Ellie Holcomb. Two of the songs include background vocals from Caleb Chapman of the band Colony House.

The current “The Edge of Dawn Tour” itinerary follows:

For all the latest tour dates and more information regarding Audrey Assad and Andrew Peterson, go to www.audreyassad.com and www.andrew-peterson.com.