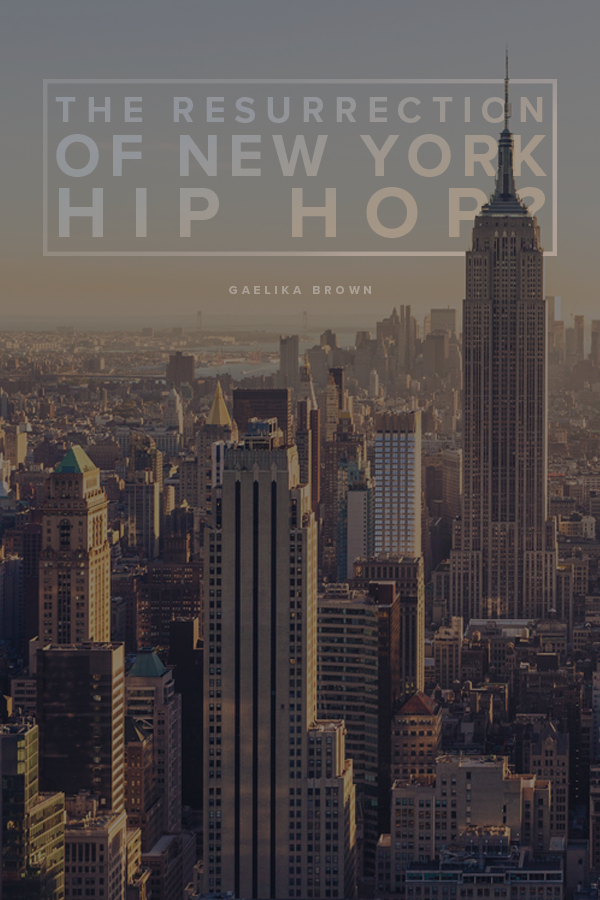 THE RESURRECTION OF NEW YORK HIP-HOP?

The History of Hip-Hop

The date is August 11, 1973. The venue is The Bronx, New York. The focus of attention is the to-be-legendary DJ Kool Herc (née Clive Campbell) and his sister Cindy who co-host a back-to-school party where neighborhood kids show up to show-off their breakdancing skills.

While the sensational “b-girls” and “b-boys,” terms DJ Kool Herc would later coin to describe his break dancers, excited the crowd into an explosive frenzy, DJ Kool Herc, feeling the crowd’s energy, decided to try something new on his turntable. He prolonged the instrumental beat by using two turntables to start a second copy of a record when the first copy ended. This allowed the crowd to get their boogie on for a longer stretch, while DJ Kool Herc scratched and rapped over the beat.

Many in the music industry credit DJ Kool Herc as the founding father of hip-hop, thereby making The Bronx the birthplace of hip-hop. The Bronx would eventually spawn other hip-hop greats like KRS-One, Big Pun, and Slick Rick, all considered legends in the hip-hop genre.

The Birth of Christian Hip-Hop

Christian hip-hop crept onto the hip-hop scene in the early 80’s. Its presence wasn’t largely known until 1982 in Queens, New York, when MC Sweet recorded, ‘Jesus Christ’—a song stylistically reminiscent of the 1979 song, ‘Rapper’s Delight’ by The Sugar Hill Gang.” Since then a small sub-genre known as CHH (“Christian Hip-Hop”) has become increasingly popular, especially with the help of more popular CHH artists like Cross Movement, Tunnel Rats, Lecrae, and Andy Mineo, to name a few.

More than 40 years after DJ Kool Herc first scratched and rapped over a beat, The Bronx is still kicking out lyrical-spitters.

Raised in The Bronx by Puerto-Rican, Christian-minister parents, Angie Rose is the youngest of ten siblings. She and an older brother were heavily influenced by the hip-hop culture, embracing the music, the clothes, and the vernacular. During Angie’s youth (circa 1990’s), hip-hop evolved to a form of expression, influencing fans from many different ethnicities.

Angie remembers her then-teenage brother keeping a mic in his room where he would, “throw on beats or would be rappin’ in the hallway with his friends.” Angie said she would sit and watch her brother and his friends go back and forth in a rap cypher (impromptu freestyle rapping one after another). She remembers they would allow her, then five years old, to jump in. “They used to call me Hurricane Angie.”

It was that early exposure to hip-hop that caused Angie to fall in love with it and gain an understanding of the rhythm. As the little sister who adored her big brother, Angie would mimic everything her brother did, including laying on the floor while pretending to scribble lyrics in a notebook as he did the same on the couch above her. “Yo, help me write a rhyme!” she begged her brother. Being the adorning big brother, he would help her write a rhyme.

Angie grew up to not only be a gifted lyricist, but a singer and songwriter as well. Unlike many contemporary rappers—who seem to glorify sex, money, drugs, and violence—Angie Rose’s fans know her as a CHH artist.

Angie had not planned on becoming a rapper. She once traveled a path filled with drugs, alcohol abuse, and loss of self-worth; but she never lost the longing for peace—a peace that she would later learn is possible only through a relationship with God.

Drowning in despair and hopelessness, Angie sat at her piano and began to sing, in Spanish, a praise song to God, which she describes as the moment she met God and a dramatic transformation occurred in her life:

Angie says it was that encounter with God that gave her a desire to share with others her life experiences and the story of the God that saved her life.

Angie’s love story with God would eventually deliver her to the doorsteps of JahRock’n Productions, a Brooklyn, New York, multifaceted media company founded in 2005 by Chris “Rock” Belmont. JahRock’n is the hub in New York where many CHH artists go to produce, record, mix, and master their work. When a friend of Angie was recording at JahRock’n, he called Angie to come sing and record a hook for him. Angie came dressed in floral prints and jewelry, a look she considers “girly.” Because of her style of dress, Angie believes when he first met her, Chris Belmont didn’t believe she could rap.

The JahRock’n team played the instrumental to Staten Island, New York rapper HeeSun Lee’s, “Life is Too Short,” and Angie began to freestyle rap. The team played more beats, and Angie kept rapping. From that day to this, Angie has not stopped creating music that points towards God.

In the 80’s and 90’s Brooklyn, New York, would be the turf from which many hip-hop legends would originate, such as Busta Rhymes, Big Daddy Kane, Foxxy Brown, and Biggie Smalls. A young rapper out of Brooklyn recently making a name for himself in the CHH genre, is Th3 Saga.

Saga credits hip-hop artist 50 Cent and his G-Unit crew with playing a major part in his own introductions to hip-hop: Saga adopted 50 Cent’s style of rap after watching how influential 50 Cent was with his peers.

Then, as Saga recounts, the Lord started to work on his heart and his lyrics. He slowly started transitioning to writing more positive rhymes, removing cursing from his lyrics, then to writing songs about Jesus. Saga recounted that one day he said to himself, “You know what? I’m just going to give my gifts to God where they belong, and just give everything I have to God with my music.”

The Battle is the Lord’s

The 2002 Eminem movie 8 Mile is credited with creating a new generation of battle-rap lovers. Battle-rap, not unlike its counterpart — rap — is an aggressive form of expression:, described as a lyrical battle intended to knockout an opponent with clever and, often-times, disrespectful punch lines. The movie highlighted the style of freestyle-rhymes-over beats, but on its heels, another style emerged: acappella, pre-written, battle-rap.

Th3 Saga had been a fan of battle-rap since 8 Mile, and soon embraced the new a cappella, pre-written, battle-rap style. As a Christian, Th3 Saga was leery about entering the battle-rap world, saying, “I never wanted to step into it as a Christian, because I didn’t know how it was done or if it would be corny.”

During his freshman year in college, a friend suggested to Saga that he join the campus battle-rap league. After Saga did his first battle—and discovered the people liked it—he decided to keep battling, which led him to some off-campus battles. These battles eventually put Saga in front of the “right” people who could have an impact on his career. Today, Saga is a member of one of the most respected leagues, URL (Ultimate Rap League).

Saga points out that most rappers fabricate their lyrics about a life they don’t live, explaining, “I’m not going to sit up here and front, and put on a façade like you do. I’m actually going to come up here and be myself, and show why what you are saying is completely out of the character of who you actually are.”

So it’s breaking down this false bravado they have. And showing them, ‘Bro this is who you really are. And look at the impact you have.’ … It is more so to try to show them who they really are in a battle, and show them you just need to be yourself, and at the same time showing them Christ … I guess you can say in a [harsher] manner I’m saying, ‘Listen, God ain’t playing no games out here,’ while still showing and extending that grace that God can change people. But sometimes it takes an aggressive manner to get people to really realize who God is.

This aggressive tactic of delivering the good news has drawn negative feedback from parts of the Church towards Th3 Saga. “One thing that hinders people from understanding the ministry is not really understanding the vision behind it,” Saga explains. “I think people choose to be ignorant in how God can be glorified in this … Because they see things on camera, but don’t see more of the ministry that goes on at the battles. People are coming up to me and telling me how impactful these kinds of things are to their lives and the people around them.”

Th3 Saga has been seen as a breath of fresh air in the rap-battle world. He is respected for doing something different. Although most of his peers don’t agree with his lyrics, they appreciate it. Saga sees this as God at work.

Today, many teenagers are virally sharing Saga’s rap battles with their friends. Perhaps they see that it is cool to be a Christian, feeling empowered, knowing that Saga has not compromised who he is in an atmosphere where people try to be who the world wants them to be. Saga says, “I see that as an ultimate humbling experience that God can use me to impact people I’ve never met before.”

The People of the Resurrection

The CHH scene in New York is bustling with new artists. They are young, hungry, and understand their calling. They are willing to help build up each other because they understand the importance of doing it for the body of Christ. “I’m actually excited to see how God moves in this generation of CHH artists in New York,” said Th3 Saga.

With the emergence of Christian hip-hop artists in New York, is it possible the New York hip-hop scene is being resurrected?

THE RESURRECTION OF NEW YORK HIP-HOP? was written by Gaelika “Brown Theory” Brown, narrator-creator-producer of Testimony: A Musician’s Story, an audio-biography podcast series on Christian artists. More information can be found on the website here.