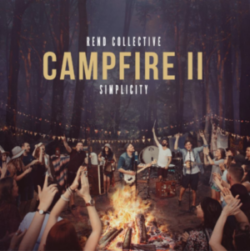 Back in 2013, Rend Collective released the first Campfire album, an album that took the worship collective away from the four walls of the studio and brought them to the great outdoors. The Campfire Project centers around performing covers of songs from their previous albums, using acoustic instruments and percussion to create an organic atmosphere of worship in a natural environment.

Three years and one Campfire: Christmas album later, they are back with the second instalment in the series {third if you count the Christmas album} titled Campfire II: Simplicity.

While the first album was recorded at the beach, this album was recorded in the woods and starts off with a short rendition of the classic song ‘This Little Light of Mine’ which is followed quickly by ‘Free As A Bird’. Chris Llewellyn’s vocals carry this song with effortless grace. The song, like all the other songs on the album, is very stripped down in comparison to the original rendition as most of the synthetic sounds are replaced with choruses and chants.

‘Live Alive’ builds on the foundation that the previous songs have laid with its foot stomping chorus. The next song is a cover of the Hillsong UNITED song ‘Oceans (Where My Feet May Fail)’. They give the song a more upbeat and joyous delivery and Ali Gilkeson’s harmonies really stand out creating a truly beautiful experience.

‘Every Giant Will Fall’ is sung with palpable energy as the use of bagpipes gives it a special touch. ‘My Lighthouse’ is led by Ali Gilkeson as she sings a stripped down version of the song accompanied by mild piano playing, foot stomps and handclaps.

‘Whatever Comes’ is the calmest song this album standing as a solemn prayer to God asking him to keep us through the storms of life whatever we encounter. Chris sings this song with conviction and his emotions bleed through very easily. ‘Joy Of The Lord’ puts a smile on your face from start to finish with its infectious melody and heartfelt lyrics.

‘Your Royal Blood’ starts with the acoustic guitar and Chris alone, voices join during the first chorus after which the other instruments follow. It’s a simple yet beautifully rendered song and the introduction of the horns towards the middle of the song puts the icing on the cake.

‘Simplicity’ as the name of the song implies draws you in effortlessly as the strings and the banjo infect you with a sweet melody that’s difficult to resist. The chorus, ‘You’re the reason I sing/The reason sing/ Yes my heart will sing/How I love you’ is a simple yet powerful declaration of love to God.

‘More Than Conquerors’ takes us back to the initial pace and feel of the album while the last track more ‘You Will Never Run’ brings everyone together for one last shout of celebration. Once again, the horns take center stage on this song and it’s impossible to listen without jumping for joy.

Rend Collective has proven that they are at home with the outdoor organic experience. Anyone familiar with their works will not be surprised by their delivery on this album, it’s a wonderful addition to their impressive line-up of releases.

For new listeners, it’s a great way to get familiar with a truly iconic band whose best days are still to come.