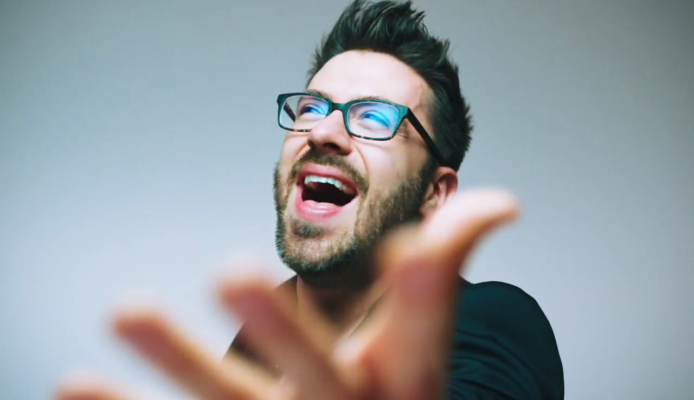 Danny Gokey Inspires Listeners to “Rise” Up in Times of Adversity

Danny Gokey released his new album Rise on January 13th, 2017. His previous album, Hope in Front of Me, successfully held the number one spot on Billboard’s Christian Album chart in 2014. A former contestant on American Idol (season 8),  Gokey is well-known for his strong vocal talent, and since then has also been credited with writing songs that inspire hope and perseverance in listeners.

Gokey has always been open about his life’s struggles, including the tragedy of the loss of his first wife, through his music. In this way he connects to listeners who find themselves feeling weighed down by hardships and humbly points to Christ as the ultimate hope.

Rise is no exception, and is yet another lyrically and musically stirring “masterpiece” in his discography.

“Stronger Than We Think” begins the album with a beat that draws the listener in. The music is exclusively synth patterns with ethereal vocals in the verses. The production quality is well done from the get-go and continues throughout the album. The vocals of this song are mostly in Gokey’s upper register, and he brings a balance of delicate and deliberate delivery of the lyrics. “We’re stronger than we think we are/ there’s a thunder rolling in our hearts” are lines from the chorus and set the tone of boldness that is a recurring theme through the rest of the album.

A rhythmic dance of vocals, piano, tambourine, and a drumbeat blends to begin track 2, “If You Ain’t In It”. Background vocals and trumpet add to the upbeat chorus. This song is about how life isn’t the same if God is not in it and the lyrics “Here is my confession/ I’m a man of imperfection/ and my heart can go off chasing empty things” portray that feeling with relatable clarity.

The first radio single and title track “Rise” came out on September 2, 2016. This track is quickly a favorite with tones of anticipation for a brighter future. The song touches on themes of resurrection, restoration, and “radiant light” shining in dark places. It’s lyrically poetic in the chorus, as well as the bridge with the stand- out line “Creations longing for the day/For kings and queens to take their place.” The production on this piece leaves listeners with a sense of renewed purpose and drive.

“Masterpiece” intros with ambient sounds of strings, vocals, and bells that quiet for the verses. On the slow side, the lyrics and music go well together. Gokey goes all out vocally in the chorus, crescendoing with the music. It echoes familiar feelings of hopelessness in a dark situation and coming to the realization that God is working on us, following the metaphor of an artist working with a masterpiece.

“The Comeback” is an interesting play with musical beat and lyrical rhythm. It’s a fun, toe-tapping type of song (maybe spurring on some dancing?!). Motivation to press on around the next corner is the prevalent theme in this track, as made evident through the line “You’ve come so far/ keep going/ here comes a comeback.” Similarly, “Never Be the Same” comes out fast paced. The chorus, lyrically simple and repetitive, has clean cut vocals that intertwine between measures of a well-produced percussion riff. Brilliantly produced is the bridge, a layering of falsetto vocal harmonies.

Catching the ear with female background vocals in the introduction and verse, “Slow Down” is slower in tempo. In the chorus there is an interesting play between lead vocals, music, and background vocals. It seems a little too much going on at once, although it’s a captivating experiment in layering for the chorus. One thing, however, that redeems the musical mayhem is the very passionate vocals that Gokey gives to this track.

“What Love Can Do” brings a Gospel vibe to the otherwise pop album with an organ and choir. Listeners can hear clapping and the beat of a high hat throughout the verses, and trumpets blast in later on in the song. In this track, Danny testifies to being “living proof to what love can do.”

“Chasing” features singer Jordin Sparks, winner of American Idol season 6. It’s a beautiful ballad, with the main instrumentation being a subtle piano, and the main focus is the vocals. A guitar comes in and Sparks sings a delicate harmony in the chorus. This track is absolutely beautiful musically, lyrically, and vocally. The voices of Gokey and Sparks blend so well to convey in a melodic sense the wonder of God’s love that constantly chases us even when we chase other things.

“Symptoms” has an aggressive beginning with background singers keeping beat and an electric slap bass adding color to the verse. Piano and horns appear in the chorus, bringing a flavor of dance-floor fever to the music. A metaphor of the effects of God’s love in our lives, the lyrics of “Symptoms” give a fresh perspective to something that we experience but don’t always have the words to describe.

“Better Then I found It” is an honest but hopeful ballad featuring the talents of Gospel singer Kierra Sheard. The subject matter is along the lines of the depressing news that has been prevalent recently, but smoothly inspires us to leave our world better than we found it. Through powerful lyrics, Gokey reminds us that we can be a light where we are. “Rapid fire love/ that’s my ammunition and I’m loading up” are lyrics that cleverly tie back to the beginning verse,  which referenced the shooting deaths we hear about and instead uses love as the solution for healing. It’s a send off of hope, a commission and inspiration at the end of the album.

The final track is a remix of track one by Bryan Todd, a producer and songwriter. Todd added a few fun tweaks to the song, especially in the chorus, causing it to head towards an EDM vibe.

Overall, the album is a strong release to start off 2017. Gokey’s music has shifted to being almost exclusively in the pop genre, but there are a few songs he planned to have a Gospel flavor, a nod to his previous work. This change in music style, however, has no effect on the vocal and lyrical quality. Gokey has always had impressive singing talent in all registers, and his lyrics have always included themes of hope and determination. In terms of production, listeners can tell that meticulous attention was used in refining the sounds in each track. It sounds balanced and clean throughout. For the current times and circumstances, Rise offers songs of hope, patience in the waiting, and promise of redemption for people wherever they are in their journey of life.