Two of positive raps most consistent and authentic artists have teamed up to deliver a lyrically hard hitting and evangelically poignant album.  Memphis based rappers Mr. Del and FRO are teaming up to release their 7-song collaborative EP TROUBLE MAKERS.

“I have always admired the ministry of Fro,” Mr. Del shares.  “In a world where mainstream rappers team up (Kanye & Jay Z, Future & Drake), I felt that kingdom hip hop needed a collaboration that they would be proud of.”

Mr. Del and FRO came up with the TROUBLE MAKERS title based on many biblical stories of so called “trouble makers” fighting the good fight for the Kingdom.  “The bible tells us that Elijah was a trouble maker because he was doing the will of God in a land of people who turned against God,” Mr. Del explains.  “Today, we feel that we represent God in a godless society and our methods are so unconventional that it makes Christians uncomfortable.  That’s why we call ourselves and this album TROUBLE MAKERS!” 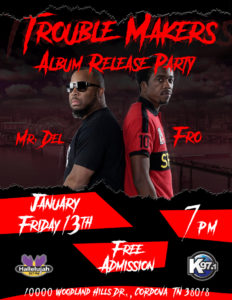 Mr. Del and FRO will host an album release party concert on Friday, January 13 at 7PM. The event will be held at City of Refuge, 10000 Woodland Hills Dr., Cordova, TN and is free to the public.