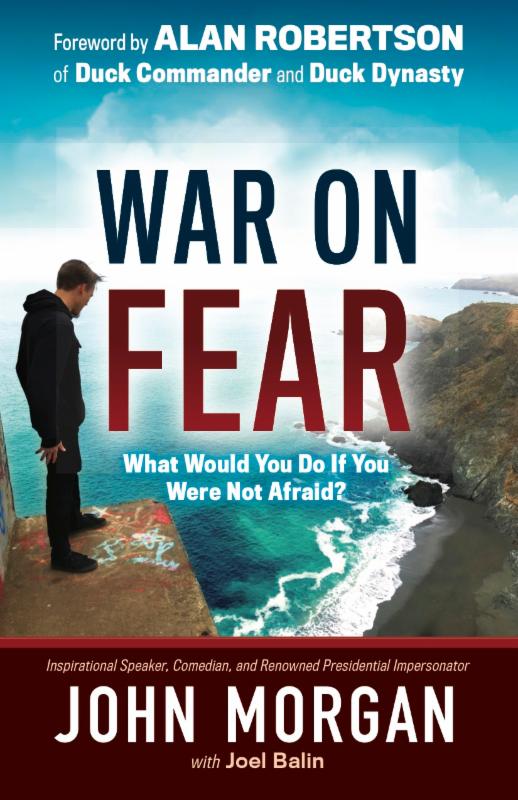 Author, motivational speaker and premier George W. Bush impersonator John Morgan is celebrating the release his latest book, War on Fear, co-written with Joel Balin, by making an appearance on JUCE-TV’s popular The Chuckie Perez Show. Fans who missed the episode, which originally aired on Saturday, December 31, 2016, will have another chance to catch Morgan’s appearance when the show is rebroadcast on Saturday, January 7, 2017, at 8:00 p.m. Pacific Time (subject to change, check local listings).

“It was enormously fun appearing on The Chuckie Perez Show,” says Morgan. “Chuckie is a delight and the evening was such a blast!”

War on Fear released on Tuesday, November 29, 2016, from Creation House, and quickly established a foothold on Amazon’s Bestseller charts, debuting at Number 73 on the online retailer’s Top 100 in Personal Growth & Christianity Kindle chart, and at Number 13 on its Hot 100 New Releases in the same category.

Morgan is passionate about the new book, and hopes it will help set people free from the fear that permeates our modern world.

“Imagine an army of men and women unafraid to pursue their dreams, obey God and love one another,” says Morgan. “One day it dawned on me that fear had kidnapped me, held me captive, and kept me from my heart’s desire. I got mad and declared war on fear. Then I looked around and saw chains of fear around my friends and loved ones everywhere. I knew I was called to fight for them, to fight with them. We will fight and win the war on fear.”

Featuring a foreword by popular speaker and TV personality Alan Robertson (Duck Dynasty), War on Fear has already garnered praise from fans, the media and even the highest levels of the political arena.

“John takes so many of the common things we fear and gives us great help in not only overcoming these enemies, but actually taking them and using them to gain strength and help others,” says Robertson. “I can tell you that if you follow John’s guide to overcoming fear and put into practice his very practical advice, you will be a more confident and positive person and you will be victorious in your war on fear.”

“John Morgan’s impersonation of President George W. Bush is so spot-on that he even fooled the CIA, who started taking orders from John,” says former governor and 2016 Presidential candidate, Mike Huckabee. “Wonderfully funny, yet respectful of the 43rd President, John Morgan has entertained millions, but there is a message in his madness, and he captures it in his book, War on Fear. From the time we’re tots, we face fears: fears of storms, the dark, and the ‘boogey man.’ While we may get over the fear of imaginary monsters, other fears linger. With authenticity and candor, John shares his own journey from fear to courage, to action. With his own flaming sword, John lights our way out of the dark.”

“I am so excited to share this practical, powerful discovery with my readers,” declares Morgan. “We have been duped by a powerless foe. Now it’s time to take back what’s rightfully ours by birthright…Courage!”