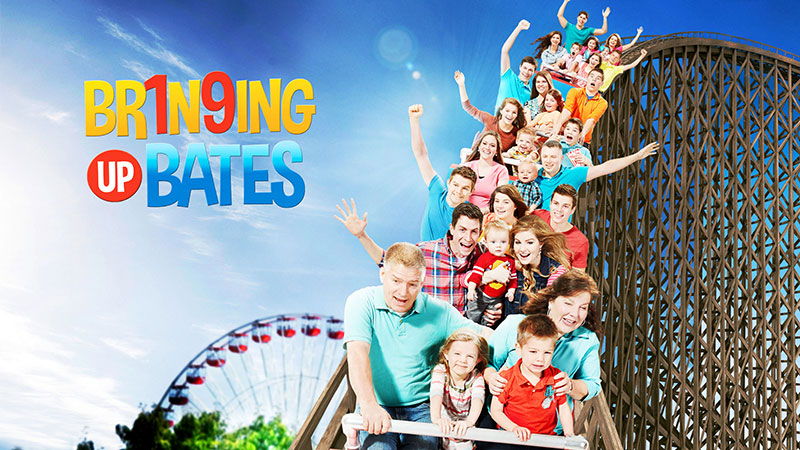 UP TV, the entertainment destination that showcases stories about modern American families and the relationships that define them, announced today that Bringing Up Bates season five will premiere Thursday, January 5 at 9 p.m. ET. Joining the Thursday night lineup on UP will be the second season of Growing Up McGhee, premiering Thursday, January 12 at 9:30 p.m. ET, following an all-new episode of Bringing Up Bates. UP has ordered 15 original episodes of Bringing Up Bates and ten original episodes of Growing Up McGhee.

“We are thrilled to bring the UP audience ‘The Biggest Family Night on Television’ with new original episodes featuring two extraordinary families,” said Timothy Kuryak, svp unscripted development and production, UP. “Families can tune in together to watch both series. And while the Bates and McGhees are larger than most families, they have many relatable moments that will make UP viewers laugh, smile and maybe even cry along the way.”

In season five of Bringing Up Bates, it’s a time of “New Beginnings” for the family as the entire crew takes on new and exciting challenges. Zach and Whitney are adjusting to life as parents to two kids, Erin and Chad are adjusting to a new baby and a new puppy, and Lawson takes on the challenge of launching his own concert tour. Meanwhile, Alyssa has some exciting news to share that will certainly change things for her and her family, Tori sees her relationship with Bobby evolve into something more serious, and Carlin and Josie adjust to a new college and possible new careers. Also, Trace takes the necessary steps to fulfill his dream of working at the Dixie Stampede, and Gil and Kelly Jo are forging full steam ahead with their dream – building a church. It’s certainly going to be a busy year full of new surprises for the Bates.

In the second season of Growing Up McGhee, with the McGhee sextuplets now six years old, their curiosity about life is making every day exciting and challenging for Ro and Mia. As they get older, each child is beginning to express their own individuality, and with that comes new interests and experiences that keep the family busy, laughing and sometimes a bit exasperated. Mia is also discovering that she is going to need to let go of the reins as the kids start socializing with friends at school and not just their siblings. From learning how to ride a bike without training wheels, going to work with Ro or learning how to play a musical instrument – all times six! – each day brings a new adventure. For Ro and Mia, the kids maturing also gives them a little more time for themselves to help them reconnect with who they were before they had kids. The season ends with an extra special event…Ro and Mia never had a wedding when they got married, so it’s the perfect time to renew their vows with their kids in tow and get that dream wedding they never had.

About UP
At UP, We Get Family. UP is one of television’s most trusted entertainment brands with content that leaves viewers feeling UP. UP tells the stories of families of all shapes, sizes and complexities through authentic, unique and relevant storytelling. UP offers hundreds of hours of original scripted and reality series, specials and movies as well as fan favorite series on multiple platforms. In addition, UP’s pro-social initiative, “Uplift Someone,” inspires people to do simple, everyday acts of kindness. UP is widely available on cable systems and satellite providers across the United States. Furthermore, UP’s subscription-on-demand offering, UP Faith & Family, features the best content in family and faith-affirming entertainment. Based in Atlanta, UP is a division of UP Entertainment, LLC and partners with the ASPiRE network on sales, marketing and other operational services.