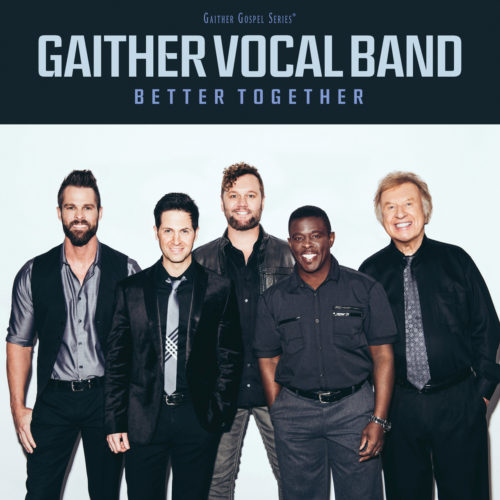 The Gospel Music Hall of Fame member quintet was honored for its recent all-new recording, Better Together, produced by group founder and bass singer Bill Gaither, group tenor David Phelps and Ben Isaacs (Jimmy Fortune, The Oak Ridge Boys).  The title cut, penned by Gaither, along with Reba Rambo-McGuire, Dony McGuire and Chip Davis, is a timeless anthem that celebrates the power of unity in an age of divisiveness.

“At this time in the history of the world, we need each other more than ever,” stated Gaither after hearing about the nomination.  “The Vocal Band has so enjoyed encouraging audiences with songs that remind us to watch each other’s backs and extend a helping hand to those around us. Together, we can change the atmosphere and make this world a better place.”

That message is reflected throughout the 12-song collection that breathes new life into gospel classics and American standards including “Working on a Building,” “Dig a Little Deeper,” “Didn’t It Rain,” “Led Out of Bondage” and more.  The recording also features the group’s unique rendition of “You’ve Got a Friend,” a pop treasure previously performed by Carole King, James Taylor and others.

For over three decades Gaither has been bringing together some of the most well-respected gospel music vocalists, creating the benchmark tradition of the renowned Gaither Vocal Band.  Members David Phelps, Wes Hampton, Todd Suttles, Adam Crabb and Gaither continue the group’s streak of award-winning line-ups, showcasing intricate vocal arrangements and intimate blends with this new release.

Creating unity with diverse talent has become a lifelong trademark for Gaither, who is a six-time GRAMMY® Award winner and a 41-time Gospel Music Association DOVE Award winner. He has hosted one of the largest concert tours in the Christian music industry for over two decades, joining the hands of artists, old and young, bridging generational gaps and varying musical preferences.

Better Together debuted at #1 on the Southern Gospel chart and at #9 on the Contemporary Christian Music (CCM) chart, according to Nielsen Soundscan.  It is distributed by Capitol Christian Distribution and is available throughout general market stores and the Christian marketplace in addition to online retailers including iTunes, Amazon and www.gaither.com.

For further information regarding the Gaither Vocal Band, please visit www.gaither.com or connect on Facebook at www.facebook.com/gaithermusic or on Twitter: @gaithermusic.

ABOUT THE GAITHER VOCAL BAND

The Gaither Vocal Band has been making music since the early 80s when four men gathered around a piano before a Bill Gaither Trio concert and began harmonizing on the quartet classic “Your First Day in Heaven.” More than a quarter century later, the list of men who have comprised the Gaither Vocal Band over the years reads like a “Who’s Who” among gospel music’s best-loved male voices.

One of the most lauded and award-winning groups in gospel music garnering six GRAMMY® nominations, two GRAMMY® Awards and 18 DOVE Awards, these Gospel Music Association (GMA) Hall of Fame honorees continue to headline one of the largest tours in the field of Christian music annually; and their groundbreaking successes continue to raise the standard in male harmony. The group is comprised of Bill Gaither, David Phelps, Wes Hampton, Todd Suttles and Adam Crabb.