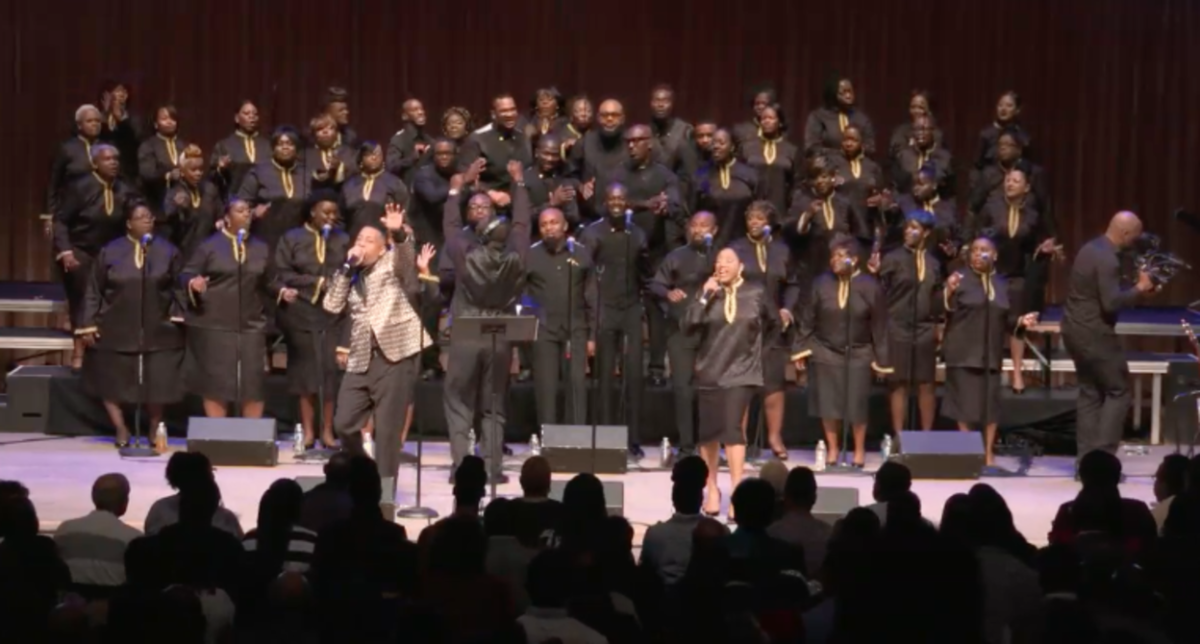 In 1995, at the suggestion of Rev. Milton Biggham (Executive Producer of SAVOY Records), Pastor Marc Cooper sent out a clarion call for singers to come together to form a new Choir.  More than 100 of South Florida’s gifted singers, songwriters and musicians responded and organized THE MIAMI MASS CHOIR.

Soon after, the Miami Mass Choir debuted their first album IT’S PRAYING TIME (1997) and gained immediate success with breakout single ‘What God Has For Me, It is For Me.” IT’S PRAYING TIME climbed to #25 on Billboard’s Top Selling Gospel Albums Chart and earned a Stellar Award for Choir of the Year.  Their follow up album was JUST FOR YOU (1998), and next came an epic collaboration with legendary artist Dorothy Norwood on the Grammy® nominated album OLE RICKETY BRIDGE in 2000.  Their third album, GOD WILL SEE YOU THROUGH, released in 2001.  Now, fifteen years later, the dynamic choir is delivering a long awaited project on December 9, 2016 – The MIAMI MASS CHOIR LIVE: At the Adrienne Arsht Center.

“This new album is important to Miami Mass as a group because it is an opportunity to continue the great legacy of promoting local songwriters, musicians and singers who desire to use their gifts musically,” shares Pastor Marc Cooper, Miami Mass Choir Director.  “It’s also an honor to get the opportunity, through the Adrienne Arsht Center, to bring gospel music to all different nationalities in South Florida and beyond and promote the great tradition of gospel music while inviting a whole new demographic and generation of listeners to enjoy the live recording experience.”

“Through this album, we hope to continue to invigorate the gospel choir scene by including traditional, contemporary, and multicultural styles of music,” Cooper explains.  “We pray this project will continue to energize local church choirs across the country with material they can sing on Sunday mornings and in concerts.

“The Miami Mass Choir’s album continues to reveal the mass amount of diverse talent Cooper extracts from his talented members.  The eclectic mix of musical tracks brilliantly includes Betty Wright offering her signature soulful sound on “That’s What He Is”, Beverly Crawford leads listeners directly to the foot of the cross on “Calvary”, and the Latin community shines as Tony LeBron shares the “Good News” in español.

Adding the cohesive flow to the album and leading off the project is the first radio single “Lord of Everything”.  Lead by Miami Mass Choir’s Danette Inyang “Lord Of Everything” is that contemporary praise song every choir and worship team across the county can engage in and energetically launch a worship service in spirited high-praise.

Listen To “Lord Of Everything”

In a climate where Gospel music is primarily made up of solo artists and small group ensembles, the return of the Miami Mass Choir is a welcomed sign of a thriving genre.  Their return brings an endearing remembrance of the times of great gospel choirs such as The Georgia Mass Choir, Rev. Milton Brunson and The Thompson Community Singers, Walter Hawkins and the Love Center Choir, O’Landa Draper and the Associates, The GMWA Women of Worship and many other great choirs.