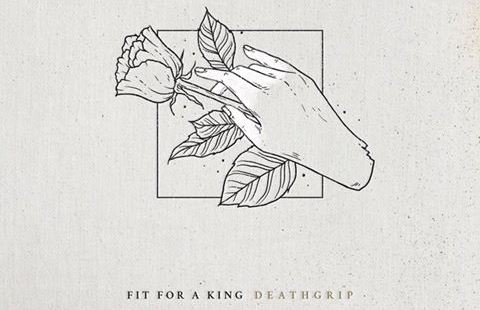 Fit For A King Hold Listeners To Ransom With “Deathgrip”

Solid State Records metalcore band Fit for A King (FFAK) have been around for almost a decade now. Prior to ‘Deathgrip’ they had released three albums and fans will agree that with every new release the band displays a level of growth and maturity in their sound, delivery and lyrical content.

Keeping this in mind, I went into ‘Deathgrip’ expecting some level of improvement but nothing could have prepared me for the experience I had listening to the album.

Lyrically and thematically speaking, the album is very grim and dark and they waste no time making that clear. Deathgrip starts off with an intro song, ‘The End’s Beginning,’ which leads us into ‘Pissed Off’. Pissed Off starts with Ryan Kirby roaring out probably the most violent chorus the band has ever written yet. With grinding riffs and a breakdown that is to die for, the best thing about this song is hands down the 13 second guttural growl at the end.

‘Dead Memory’ the next track is more melodic in nature, and it feels very much like a tug of war between the clean vocalist Ryan “Tuck” O’Leary, Ryan Kirby and guest vocalist Jake Luhrs from August Burns Red. Musically, Dead Memory is not so special. It does many of the typical things a standard metalcore track does yet the lyrics makes it stand out in a very emotional and relatable way. Anyone who listens to Ryan O’Leary sing “Would you even notice if my world was falling apart? / Would you even care if my heart stopped beating?” will be moved to a very introspective place emotionally.

‘Cold Room’ has me giving respect to Bobby Lynge on the Guitar. His runs are the first thing you hear as the song begins and with help from Jared Easterling (drums) and Tuck (Bass Guitar), they give the song a solid foundation for Kirby to do his thing.  ‘Disease’ hits very hard lyrically. With a chorus that says “We thought we were invincible/The end isn’t near, the end is here/We thought we were unbreakable/To save us, we must end us”; the song builds up to a breakdown a little over the minute mark and brings us to an unexpected pause of silence for 16 seconds (2:21-2:37) after which the song continues ’til the end.

‘Shadows and Echoes’ largely follows the same path as ‘Cold Room’ with the major difference being that Easterling (drums) was in the spotlight on this track, he was very impressive from start to finish. I also have to give props to Tuck as the chorus is arguably the catchiest on the album.

‘More Than Nameless’ and ‘We Are Lost’ keep the album going with more of the same although there are stylistic differences here and there. While the former starts off slightly experimental but when the chorus hits, it becomes a regular fit for a king song again which I found a little disappointing. The latter is instrumentally more melodic and it’s very lyrically compelling.

‘Unclaimed, Unloved’ doesn’t strike me as memorable, not because it’s not a great song but because at this point on the album there are quite a number of better songs in comparison. In terms of brutality, ‘Stacking Bodies’ is the defining moment of this album. Featuring vocals from Levi Benton of Miss May I, the track doesn’t give any space to breathe as Ryan delivers guttural growls that will leave wanting more. As a song that addresses the ‘wages of war’, it goes a long way to drive the theme of the album home.

The final track ‘Deathgrip’ draws a curtain on this masterpiece in the most beautiful way. It’s heavy and yet compelling, drawing a contrast between the verse and chorus. It also stands out as the only song on the album where the verse is sung by Tuck and the chorus yelled by Kirby and not the other way around. There is also a short dramatic pause on this track, a feat that the band seems to favour on this album.

To put it simply, Deathgrip is an album that brings together all the experiences and lessons the band has learnt over the years. It is a true testament of the dedication of the band and their ability to grow and mature. Personally I would like to see the band try their hands on something more diverse and slightly experimental in the future, but there is no denying that this is their best album yet.