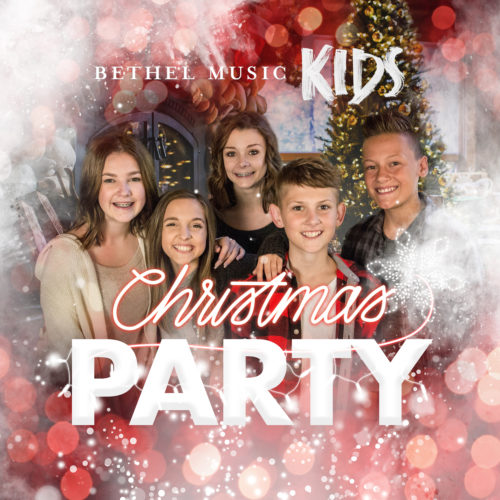 Dove Award-winning Bethel Music Kids (‪#‎BethelMusicKids) releases their Christmas Party EP internationally Nov. 18. The new recording follows their first full-length album and concert film, Come Alive, which launched to the top of the retail charts amidst acclaim when it released Dec. 2015 and went on to receive the GMA Dove Award for “Children’s Music Album of the Year” last month after receiving a trio of nominations.

Like Come Alive, this new five-song collection of reimagined Christmas classics combines dance beats, pop arrangements and energetic programming. Sung by kids who all attend Bethel Christian School, Christmas Party features “Little Drummer Boy,” a fresh interpretation of the well-known carol, “The Little Drummer Boy.” With explosive percussion and catchy musical themes, the song tells the story of a child realizing that the gift given from the cry of our hearts to worship the King of kings is the gift favored above all.

The EP also features the classic anthem “Joy to the World,” which bursts with a grand parade of energy while the track, “O Holy Night,” sweeps in with an ethereal tone and triumphant rhythms. The project further includes the spirited processional, “O Come All Ye Faithful,” and soaring ballad, “O Come, O Come Emmanuel.”

Following the release of the EP, Bethel Music Kids are inviting families to join them to celebrate the birth of Jesus as recorded in Scripture through story, song and movement on their “Christmas Party Tour.” The tour begins Dec. 10 in Fresno, CA and travels to Pasadena (12/11), Indian Wells (12/13), San Diego (12/14) and wraps up in Redding (12/17).

With activity stations being set up at venues before each show that are designed to usher in the Christmas spirit, Bethel Music Kids will kick-off the program sharing songs from their Christmas Party EP interwoven with a dynamic telling of the Christmas story. The second segment of the concert will feature favorites from the Bethel Music Kids Come Alive album, including the single, “You Make Me Brave,” all culminating in an interactive grand finale.

Tickets for each event includes early admission to the event, a small group choreography session, a question and answer session with Bethel Music Kids and a ministry time designed to equip and empower families and kids to love God and live for Him in an expressive way.

Bethel Music Kids is an imprint of Bethel Music, a worship ministry that formed as an organic extension of Bethel Church in Redding, CA. Over the last five years, Bethel Music has grown from being a local church music ministry to becoming a global outreach featuring a cadre of songwriters and worship leaders, more than 20 albums – including six albums that went to the top of Billboard’s Top Christian Albums chart, both online and on-campus worship schools, and world renown songs “No Longer Slaves” (2016 Dove Award-winning Worship Song of the Year), “We Will Not Be Shaken,” “One Thing Remains” and “This Is Amazing Grace” (2013’s and 2015’s ASCAP Christian Music “Song of the Year,” respectively), “Love Came Down” (featured on American Idol 2012), “Forever,” “You Are Good,” “You Make Me Brave” (GMA Canada Covenant Awards “Song of the Year”) and more.

The heart of Bethel Music is to be a steward of the worship being created and released at Bethel Church, making it a resource available to the world. In addition to thousands of people that attend Bethel’s weekly worship services, another 350,000 plus people subscribe to the online stream of the services at www.ibethel.tv. More about Bethel Music can be found at www.bethelmusic.com.