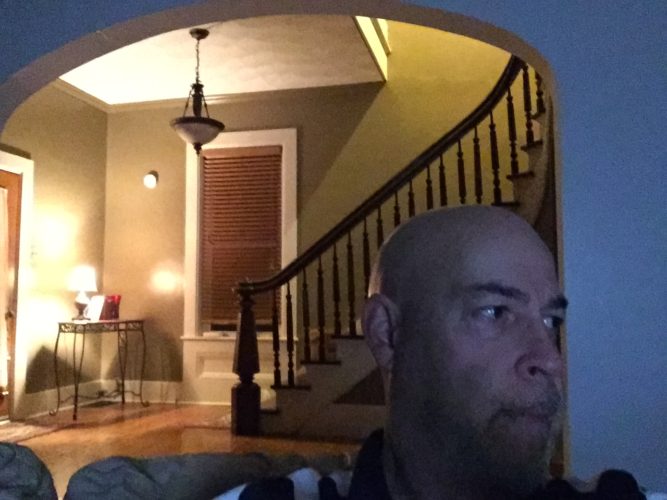 It is the fall of 1982. The sprawling campus of Eastern Illinois University seems a glittering city, inviting to many of the forward-looking rural students now walking its sidewalks and meanderthals. The four young men who turned the dual room at the corner of the third floor of Douglas Hall into a quad talk excitedly about the future – politics, economics, the first national broadcast of MTV,…

A new crew packs the Christian Campus House down 4th Street on Sunday morning. A drum kit sits in the front of the room, alongside a traditional piano and a guitar. To some of us, a long realization begins that the static religious world in which we were raised isn’t quite the end-all, be-all of Christianity. It isn’t what the conservative pastorate back home nor the fundamentalist parents who raised us implied it would be. There was a new brand of Christianity in front of us.

The trappings of what we remembered were… different. Where were the pews? Folding chairs, really? And the pastor has a beard? Aren’t pastors clean shaven? And the music! Why, we knew every church song our churches ever used, all five stanzas of each song, sung each time the song was used in a worship service. But not these songs! This was new, different, almost seeming… well, irreverent. And guitars and drums? Well that certainly wasn’t part of the fundamentalist orthodoxy that apparently thought that Artie Shaw and Glenn Miller were still novel and racy.

Attending CCH was a worship miasma for us. The experience was one which flipped everything we thought we knew about church-going on its ear. Energy! Excitement! People actually caring about each other and doing something about it! Noise and rock-style music! An intellectual preaching of the Word instead of the routine fire-and-brimstone shout and scream service of back home! All of what we were taught to believe church was, with the evil of a beat-driven musical program, right there on a Sunday morning for all to see.

For those of us raised in what seemed like stifling church environments, it didn’t take long to breathe in long gulps of fresh air. The new experience quickly became something to look forward to. It changed our ways of worshipping, of thinking about what the Church and a relationship with Christ really was; an awareness of what a relationship with Christ and the Creator could be, each and every day. As a result, many of us left behind the now oldish-seeming worship methodology of our childhoods forever.

All of what was occurring at CCH was, of course, built in large part on the burgeoning national Christian campus scene that in and of itself was building on the roots of a generation of Christian rock-based religious music. Music that was rhythmic, modern, yet lyrically focused on Christian attitudes and even scripture. That fall of 1982, a group from CCH decided to go to an Amy Grant with Michael W. Smith concert in St. Louis, Missouri. Michael was still not a solo act, although the next year he would be. A large crowd filled the Kiel Auditorium, energy bursting forth with almost as much reverberation as the music that careened around the hall. People were up and moving to Christian music and lyrics. At the time, I was learning what it was all about, but in retrospect where had that been all my life (all 17 years)? Where was the focus on Christian lifestyles and worship songs instead of old fuddy-duddy hymns and the outside-of-church musical attachments to Pink Floyd, ELO, Alan Parsons, Moody Blues, Black Sabbath…?

At that moment in time, Christian music, coupled with the atmosphere found at CCH, performed an electric arc weld on the spiritual direction of my life that carries on to this day. A heart that was mostly spiritually placid and locked in ritualistic practices became a heart that thrived on the relationship I had found, buoyed by the energy of CCH, the supportive practices of the people there, and the music I had now discovered. The combination brought me to spiritual heights I never knew existed before that time.

There was, of course, opposition. Various churches and even denominations denounced worship music, let alone Christian rock, as at best syrupy claptrap that did not promote or uphold the glory and sanctity of God. My own parents, to this day, find much of the Christian rock I listen to detestable. As the line went, “If it has a beat, it must be from the devil.” In some churches, this continues today. Yet many of those same persons sing with deep and heartfelt love affection bar ditties from yonder days which merely had lyrics switched from the more raunchy and debauched to the sacred.

But to many of us, Christian rock was an anchor to The Anchor that was sorely needed in a time of excitement, temptation, and trial – the four years of public university. Our faith was tested and tried, and then we went back to our dorm rooms or to campus fellowship and played or listened to uplifting music that was soothing to our souls.

My musical tastes have expanded and morphed exponentially since I began actually seeking out my own music somewhere in the 1970s (my earliest memory of rock music, as it existed at that time, was spinning the FM radio dial trying to find Terry Jacks’ Seasons in the Sun). I still have around many of the early albums of Christian artists who influenced me, although now largely in digital form. The massive stereo with incredibly loud speakers is no longer in existence, but the desire to continue to find the groove from those days still drives on. My friend Phil Craig, whose incredible expertise I will reference at times in this column, has many of the originals on vinyl.

But all of this Christian music – the form, the driving force – had to start somewhere. It may not be possible to draw a straight line from Koinonia to Switchfoot, or from Larry Norman to Thousand Foot Krutch, but the form and the genre grew from somewhere to the powerhouse it is today. Who were the early Christian rockers/performers? Why did they feel the need to create such a worship platform and art form, especially in light of the denouncement and abuse hurled from many Christian elders? How did they find their way through the repudiation that must have left a mark and impact on so many young Christians? How did their influences grow to what we know and hear today?

That’s what this column is all about, what I intend to investigate herein. It is, in some respects, a personal retrospective, but one that all Christian music shares as a root. It is memories of the old CCH crew – Phil & Val & Christy and many others whose company we enjoyed along the way – wrapped up in the joyous celebration of Christian rock not just as a genre but as a way of accessing a relationship with Christ.

I hope you will join me as we undergo this journey together.