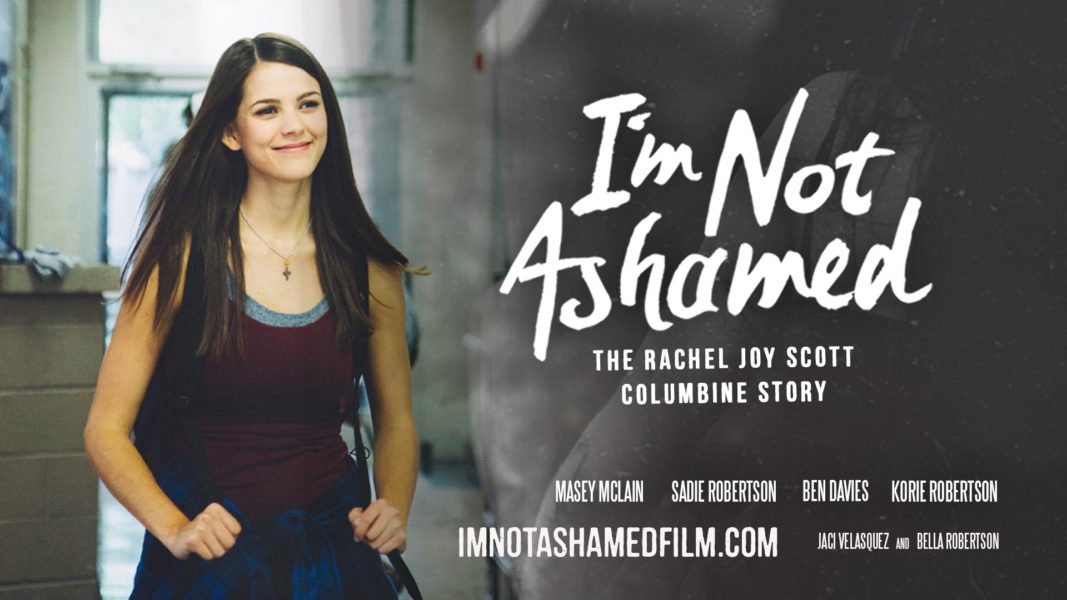 I just had the pleasure to have a quick chat with Masey McLain and Ben Davies, 2 of the 3 leads in the powerful new film I’m Not Ashamed which is in theaters now and tells the real life story of Rachel Joy Scott. Check out the interview below and find out all about how they both got involved with the film, their favorite part of Rachel Joy Scott’s story, what it was like meeting Rachel’s real life mum, a couple of the God moments on set and what Ben’s wrestler name would be!

I’m Not Ashamed tells the inspirational real life story of Rachel Joy Scott at the Columbine High School shooting in 1999 and is in theaters now. As an independent film release it’s relying on word of mouth to extend its theater run, and it’s already gaining some real traction, so if you want to support the film, firstly go and see it and secondly share it, tell all your friends and leave a review on the sites linked below. You can read a bit more of the film’s story and watch the film’s trailer below.

“I’ve always been drawn to hands. I think it’s because it’s the way we touch people,” Columbine High School student Rachel Joy Scott wrote in her journal. “If one person could go out of their way to show compassion, it could start a chain reaction.” Growing up, Rachel knew the love of God, but she wasn’t always ready to receive it. At times her faith was on fire … and at other times it was at odds with her everyday life. As she wrote in her journal: “I don’t understand why having a walk with God is so hard for me. I’m so weak. At school, with friends, at work.” Having reached a breaking point when her relationship with a non-believing boyfriend ended, Rachel found inspiration from her “big brother”-a former homeless teen she helped lead to Christ. After praying, “Father, use my life to touch the world and let your light shine through me,” her renewed commitment to Jesus played out compassionately and powerfully at her high school … and around the world.

Pure Flix presents I’M NOT ASHAMED, the inspiring true story of Rachel Joy Scott at Columbine High School. When her hopes and dreams seemed to end, God was just getting started. Opening in theaters last Friday, October 21, I’M NOT ASHAMED stars Masey McLain, Ben Davies, Sadie Robertson, Korie Robertson, Jaci Velasquez, and Jennifer O’Neill. Based on Rachel’s honest and heartfelt journals, I’M NOT ASHAMED is a hope-filled reminder that when we put our lives in God’s hands, we can make a world of difference.