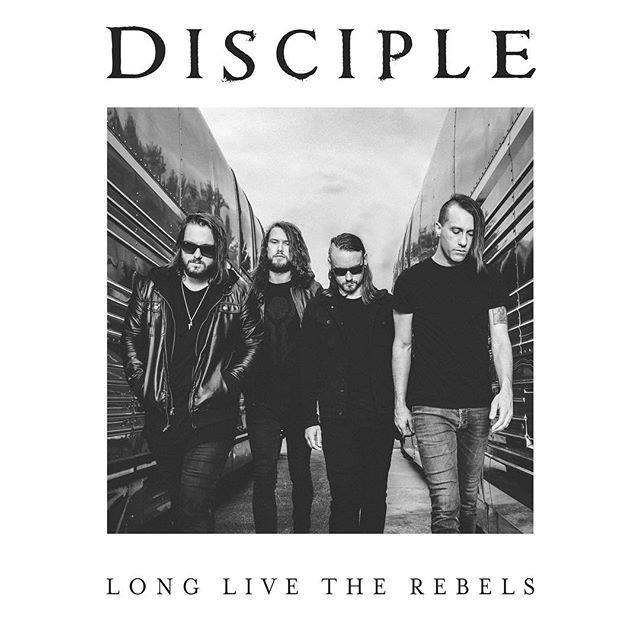 If Christian rockers Disciple hit a home run with their last album, Attack, they absolutely knocked it out of the park with Long Live the Rebels, their most recent offering.  This album is jam-packed with even more searing guitar licks, thought-provoking lyrics, and almost too much energy for one’s stereo, let alone one’s iPod.  This is music that needs to be cranked to 11, provoking listeners to passionately sing (or scream) along at deafening volumes.

The opening track, First Love, all but lets you ease into the album, starting softly and building to a sudden guitar attack that ushers in the adventure to follow.  First Love expresses the sorrow over drifting away from a once intimate relationship with God, being “so close that our hearts would beat as one,” and the desire to rediscover that intimacy.  Next up is title track Long Live the Rebels, which immediately grabs your attention with an irresistible guitar hook.  Just over a minute into the song, lead guitarist Andrew Stanton gets to display his lightning-fast fingers on an impressive solo, with the support of Josiah Prince’s crunchy rhythm guitar.  This song embodies what Disciple stands for: radically going against the culture to share the love of God, even when that means being rejected by the world.

Secret Weapon was penned by Josiah Prince, who certainly has a knack for crafting some creative lyrics.  This secret weapon is the unseen power that God breathes into our weaknesses, only serving to make us stronger and thus revealing His glory.  Secret Weapon begins with the synth dancing through a broken chord, while a dark and ominous chord rests just beneath the surface.  The drums are gradually added, reaching full intensity as the guitars kick in, and contributing to the ferocity of this incredible song.  In contrast, Erase is a slower, though no less intense, track.  Kevin Young’s voice soars through these heartfelt lyrics, imploring listeners to believe that they are never truly alone.  As he repeats “you are not alone,” Joey West provides a resolute beat on the drums, emphasizing the power of this lyric.

Come My Way is certainly one powerhouse of a song.  The mysterious beginning gives way to a stripped down accompaniment to the first couple verses, just a sparse piano line and the drums.  The intensity builds as the chorus approaches, leading to a heart-stopping wall of guitars.  After the chorus, there is a drum break, giving Joey West a chance to exhibit his tenacious drum skills.  This song is essentially the enemy whispering, begging us to come back to our old, sinful ways, and the fight to say “no.”  Come My Way also features Josiah Prince on vocals during the verses, his voice strong and sure.

Next up is Underdog Fight Song, and it is as fierce as the title would imply.  This song details the fight to prove our critics wrong, despite their desire to fit everyone into a neatly organized and perfectly labeled box.  Joey West is simply a beast, the song ending in such an explosion of drums that you can hear sticks flying to the ground.  This explosion is evidence that the song can’t quite handle all the passion contained within.  God Is With Us is the calm after that storm of emotion, reminding us that we only need to call on the Name of our Father, and He will be with us in the strongest darkness, and through the flood and the flames we may encounter on our journey through this life.  The beautiful vocal harmonies throughout the bridge serve to underscore the peaceful message of this song.

Disciple takes a unique approach with the song Spirit Fire.  It is not too often that a band dedicates a song to the topic of the Holy Spirit and His imperative role in our lives.  The second verse paints an intriguing picture of the fight for our souls, opposing forces pulling us in opposite directions, but it is ultimately the Spirit that wins the battle, pointing all glory back to God our Father.  Forever Starts Today explores another uncommon subject, telling the story of a person that has persistently prayed for a loved one to accept God’s gracious offer of forgiveness and eternal life, patiently watching their painful journey and waiting for the Holy Spirit to make His presence known.

Black Hole is quite possibly one of the most musically creative songs on the record, seamlessly flowing through multiple meter changes, crazy drum patterns, and incredibly intricate guitar work.  The lyrics also contain an extremely captivating concept: black holes in space have such a strong gravitational force that absolutely nothing can escape their grasp.  Kevin Young draws a powerful parallel between those black holes and the black holes in Jesus’ hands that exist to steal away all the sins of the world.  After Kevin makes this declaration, a guitar breakdown ensues, a discordant fall into space, unable to escape the pull of the black hole.

Life does not always make sense, and Spinning seeks to capture that feeling, the lyrics full of contradictions and the juxtaposition of the good alongside the bad.  Anyone who has ever felt overwhelmed and wished for the world to stop spinning, even if just for a moment, will be able to relate to this song.  The record ends on a much lighter, more hopeful note; Empty Grave has a bit of a Southern Gospel feel, and includes Joyce Martin Sanders on background vocals.  This song is unique in that it is not the heavy guitars one would expect, but in the spirit of Southern Gospel, it features the organ, as well as piano, acoustic guitar, and some string fills thrown in for good measure.  The lyrics are achingly beautiful and the melody is soaring, allowing Kevin Young’s strong voice to shine.  This song is a positively delightful end to an immensely epic record.

Long Live the Rebels certainly sees Disciple at the top of their game.  The incredibly well-written lyrics will challenge the listener in their relationship with God, as well as at times remind them of the unconditional love that the Heavenly Father bestows upon them.  The music is extraordinarily well performed, each song providing layer upon layer of intricacy, introducing the listener to something new each time.  The sound of this album is reminiscent enough of the old-school Disciple to keep longtime fans engaged, but is also new and fresh, and will draw in a multitude of new listeners; an absolute must-have record.