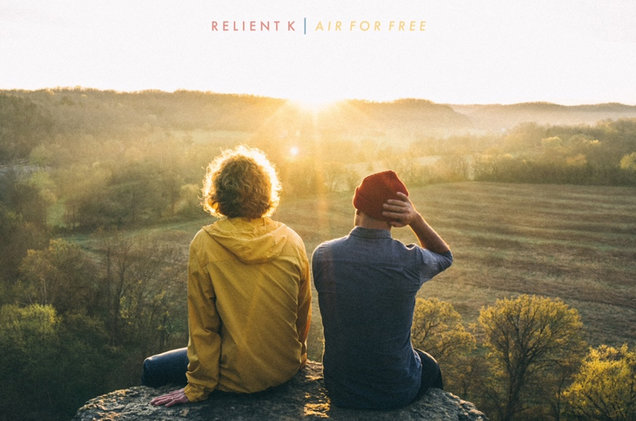 Review: Relient K Gifts Us With “Air For Free” With New Record

Relient K is a household name for anyone who is familiar with the Christian Rock scene. Despite the changes in the original line-up of the band (Matt Thiessen and Matt Hopes being the only original members left), they’ve pulled through for over a decade and still remain a force to be reckoned with in Christian Rock today.

Three years ago, the band released a pop album titled “Collapsible Lung” which received mixed reviews and a lot of criticism, particularly from the fans. If you’re reading this and you fall into this category, you can sleep easy because “Air For Free” is the album you thought Collapsible Lung was going to be.

The album begins with “Bummin” a really fun song that in some way mirrors the familiar Relient K “signature sound” that we all know and love. “Local Construction,” the second track, is a beautiful song that talks about the progressive nature of life. The song reveals in a story-like manner how we’re never done with learning and growing as long as we are alive.

“Mrs Hippoptamuses” and “Cat” keep the album going with fun upbeat piano ballads, chants and choruses that are so easy to bob your head or tap your feet to. The former is a song dedicated to knowing where you come from as you hear them chanting “O-H, I-O” almost throughout the whole song, while the latter almost sounds a tad narcissistic (the good kind).

“Man”, “Air for Free” and “God” change the emotional spectrum of the album giving it a more serious undertone. Man speaks about coming of age, a subject that is very relatable. ‘We all have to grow up sometime’ seems to be the general theme of this song as Matt sings “Wake up, wake up its time to be a man…” Air for Free takes the synthpop approaches as it talks about relationships.

“God” is arguably the most powerful song on the album as Matt Thiessen reaffirms his belief in God. The best thing about the song for me is how relatable it is, the approach is simple and yet powerful.

“Elephant Parade” takes us back to ‘happy town’ as Relient K takes a different approach using horns to create a circus like number. “Mountaintop” is a mid-tempo song where Matt talks about lacking words to express how much someone means to him.

The song “Sleepin” shows just how much the band has grown, it easily sounds like a natural progression from the feel of “Forget and not Slow Down” but with a more mature approach. The addition of horns towards the end also gives it more flare.

“Empty House” and “Flower” are both beautiful piano ballads. “Empty House” stands out with Matt’s voice altered slightly by auto tune. I’m not exactly sure how I felt about this knowing how great Matt sounds normally, but I don’t think it had any negative effect on the song. “Flower” on the other hand borrows a page or two from the more classic Relient K sound.

“Marigold” is such an emotional number with the lyrics, “Oh I’m a Marigold but you picked me”. The song really picks up towards the middle as they change the pace in typical fashion and Matt sings “Nothing but the sun in your eyes…” over echoes of “Ooooh Ooooh Ooh Ooh Ooh” in the background.

“Runnin” is a three-part song that in my opinion defines all the band has come to represent over the years. The first part is punk rock in nature (the closest thing to the old Relient K on the entire album), it’s followed by a piano pop part and finally a modern rock number that brings the song to a close. It’s one of the best songs on the entire album.

“Prodigal” and “Heartache” bring the album to a close. Prodigal is a creative approach on the “prodigal son” concept as we hear Matt calling himself one. It’s the shortest song on the album and it’s an absolute beauty to listen to. Heartache is the final song on the album and it’s the perfect way to draw the curtain. It sounds like a reflection of all the band has learnt so far and a shadow of things to come.

Air for Free isn’t a return to the old Relient K, but its honesty and originality places it right up the ranks with the best albums from the band. We all have to grow up, and in many ways Relient K is telling us that they are growing and evolving.

More importantly I think they want us to be a part of that process and to love them all the same. It’s a beautiful record for old and new fans alike and I’m proud to say I know these guys.