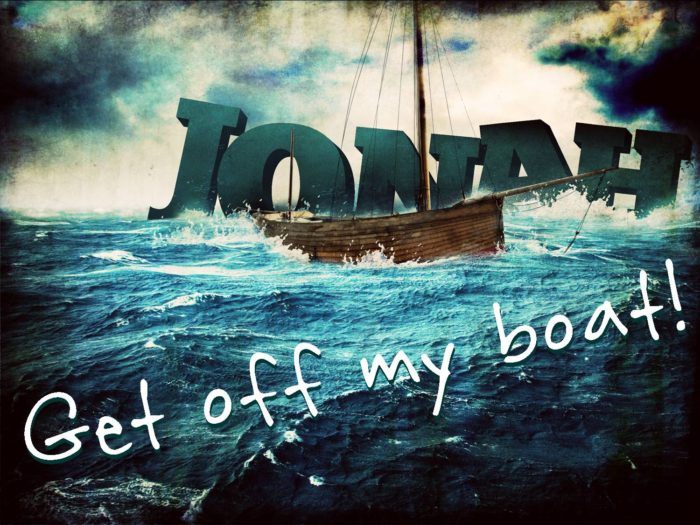 Ever had your life turned topsy-turvy after crossing paths with someone? A new friend, boy/girlfriend, business associate or even spouse? Sometimes it could be the usual fateful timings; other times it would have nothing to do with the person. At other times, one could tell after careful introspection that the presence or influence of a person hasn’t augured well for him at all. What to do, what to do. Pray for the stormy days to pass or go your separate ways?

For those not familiar with the Biblical Jonah story, let me give you a quick recap. God told him to go to the city of Nineveh to tell them to turn from their wicked ways but he didn’t want to because He knew God would eventually have mercy upon the people and not pour out His wrath on them which they deserved. So he decided to get on a ship and go the other way to Tarshish. Unfortunately, a tempest befell the sea and it didn’t look like it was going to pass by anytime soon. Jonah knew it was because of him and to spare the lives of the others, he was thrown off the ship and the sea became calm.

From this story, you can tell that the sailors suffered that storm not because they had done anything wrong or that Jonah was a bad influence on them. He just happened to be on the wrong boat headed in the wrong direction and God wanted him to redirect his steps. Unfortunately, God’s prompting affected the innocent people on the ship and gave them a little scare. But can we tell when a Jonah enters our boat and threatens our journey on the wild sea of life?

We sometimes try to hold on to people who are not meant to be in it the first place; thinking that if we persist, we would be able to surmount the hardships and make headway. But sometimes, it is not meant to be and for a good reason as well. The person could be running away from his/her destiny and is using you as a way out. And by entertaining him at your camp, things begin to go awry.

It is okay to let go of certain people at a point in time. It doesn’t make you a bad person. By letting go of your hold on them, you could be redirecting them on the path that they are supposed to be treading on. Of course, as a believer, you need God’s guidance for that. If He says, let go…do so. You would be helping the person; and you would also be sparing yourself hardships not even meant for you.

Commit every person in your life to God. Let Him direct your dealings with them. Whether to keep them close, let them go or help put them on the right track, ask for His guidance and don’t be afraid to act on it promptly. You could be saving someone’s life and destiny.