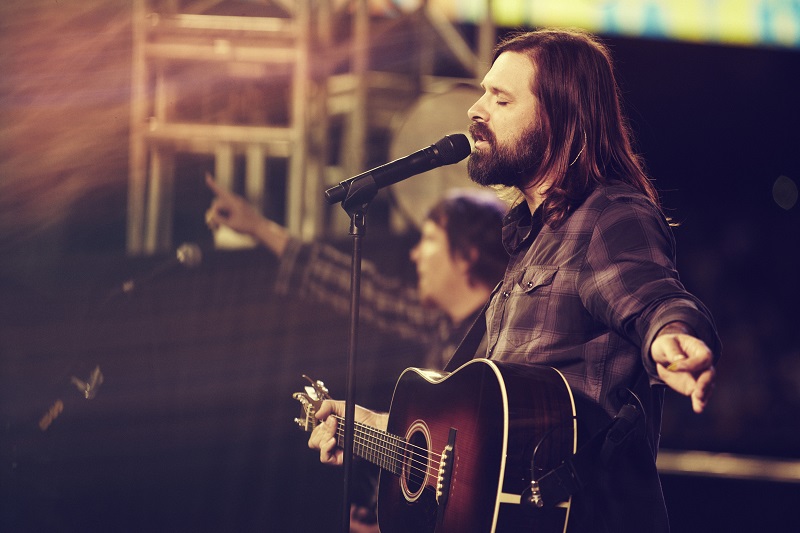 The night was off to an electric start when Third Day took the stage at the Bible Chapel in McMurray, Pennsylvania.  There was an explosion of sound and lights as the band immediately launched into “Lift Up Your Face.”  The crowd enthusiastically clapped and sang along.  Without missing a beat, they went right into “Tunnel,” keeping the crowd going.  Throughout the night, the band was joined by Trevor Morgan, and he was especially featured on guitar and vocals during “God of Wonders.”

During a break between songs, lead singer Mac Powell spoke a little of the band’s early days, saying the song they were about to play was one of their old school numbers, but was still one of their most requested songs.  That song turned out to be “Thief,” and the crowd was very vocal in their appreciation.  “Thief,” which tells the story of the thief hanging on the cross beside Jesus, is a very melancholy, mournful tune, the guitar gently weeping through a beautiful guitar solo.

The next segment of the evening was what Mac referred to as a very scary moment: the band took requests from the audience, with the stipulation that the requests had to be Third Day songs, as well as Third Day songs that the band actually knew how to play.  Armed with a self-proclaimed veto power, Mac headed out into the audience to find out what the people wanted to hear.  Through many excited shouts, the band settled on “These Thousand Hills,” “Mountain of God,” and “Take My Life.”

After this time of requests, they brought out their tour mate Warren Barfield to join them on “I’ve Always Loved You,” the audience joining in as the honorary Third Day choir.  As the song wrapped up, the members of Third Day exited the stage, allowing Warren and his acoustic guitar some time with the audience.  In an effort to capture the attention of a crowd who may not know very much about him, Warren began with “This So Sweet To Trust in Jesus,” a very familiar and well-loved hymn.  He then went on to sing his song “Red Bird.”  These red birds are monogamous, and not fair weather birds, and Warren used this as an analogy to show his love and devotion to his family.

His final song was “Love Is Not a Fight,” which was featured in the movie Fireproof.  Before singing, Warren told the story of the song’s inception.  It was written after a rather big fight between him and his wife, sparked because of a dropped pretzel.  They were on the verge of walking out on each other when Warren asked a simple question: what if they fought as hard for their marriage as they had been fighting against it?  That question was a turning point for them, and inspired a song that now inspires so many others.  Even though this was quite a serious matter, Warren spoke with a sense of humor that had everyone engaged.  He finished by sharing about a child sponsorship program that he is involved with, also speaking about how these children desperately need someone to fight for them.

After a short intermission, Third Day once again gripped everyone’s attention with “Sing a Song.”  They played a few more songs, and then Mac told a very moving story that a couple of fans had shared with him at a previous show.  Their son had been going through quite a rough time in life, eventually coming to the point of wanting to end it all.  He got in his truck and drove out to a remote spot in the woods.  Being a lover of music, he decided he wanted to hear some music as he left this world.  By divine “coincidence,” the only radio station that actually had a signal in his remote location was a Christian station, and the song that was playing was “Cry Out to Jesus” by Third Day, just what this man needed to hear to save his life.  That story inspired “I Need a Miracle,” which the band then played.  Having just heard this incredible story, the audience connected with the song in a way they may not have before.

Third Day eventually played “Cry Out to Jesus,” paired with “Blessed Assurance.”  They played a few more songs, and walked off the stage amidst much enthusiastic applause.  Almost immediately, the crowd started chanting for “one more song!”  The band obliged and once again returned to the stage.  Mac introduced the final song as his favorite off their newest record, and they launched into “Soul On Fire,” the perfect choice for an uplifting send-off, and an appropriate way to end a night filled with old favorites, encouraging stories, and some good, old-fashioned Southern rock and roll.