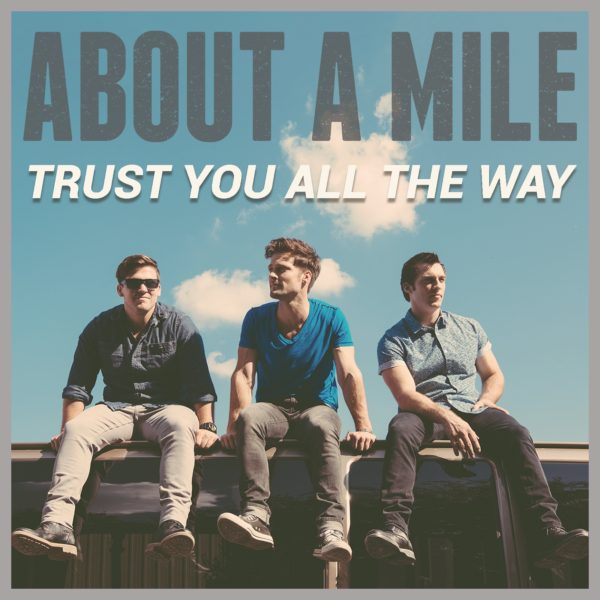 About A Mile frontman reveals bouts with drug addiction, lust, health in Trust You All The Way feature story

If faith could be measured with a guitar amplifier, Adam Klutinoty’s amp would go to 11. The lead singer and guitarist for About A Mile has seen the mess his lack of faith has created in the past. Now his faith is cranked up an extra notch.

“I want to take Christ seriously and trust Him all the way,” Adam says. “One hundred percent.”

That’s easy to say, but hard to live out.

“I’m the best example I know of giving your heart 90 percent to God,” Adam admits. “I thought, God has a plan for me, but I have some cool plans of my own in case He doesn’t come through.”

The aptly named Trust You All The Way isn’t just About A Mile’s latest album, it also describes the band’s attitude regarding their lives and ministry.

For most of his life, Adam felt his plans and God’s plans lined up. Music was a constant at his family’s home outside of Pittsburgh. Adam picked up the guitar after seeing his dad and older brother Micah play. Soon he and his brothers Luke and Levi formed a band.

“We were always jamming together,” Adam says. “Then we found a youth group that needed a worship band.”

At first, they played songs such as “Rain Down” or “Undignified.” Then they started writing their own songs and people really liked them. Adam was just 16 at the time. Levi, at 17, was the oldest, and Luke was 14.

Coming from a blue-collar Christian family, the brothers believed in hard work. Adam remembers sitting in his room all day shredding guitar licks or playing scales. All of his practice made him an amazing performer. And that’s what he dreamed of—playing for thousands.

As soon as the brothers finished high school, they went on a tour along the West Coast. Eventually, they connected with Grammy-nominated producer Ian Eskelin. Eskelin brought the band to Word Records for its debut album in 2014.

It appeared that Adam’s faith had paid off. All through his childhood and high school years, he’d dreamed of a big-time record deal.

“What separates the Christian from the world is one five-letter word: Faith,” Adam says. “I’m talking about God-pleasing faith that believes before seeing and allows us to confidently stand within the hardest battles.”

But when those battles hit, Adam’s 90-percent faith failed. After signing the record deal, Adam developed ulcerative colitis, a disease that causes stomach pain, bleeding and weight loss. At one point, he’d throw up anything he ate and became a stick figure of his normal healthy self.

Countless times during the recording process and on tour for the first album, Adam got on his knees and prayed for God to heal him. As the symptoms persisted, his faith waned. And since God wouldn’t come through for him, Adam felt he had to work harder.

He wrote 150 songs to come up with the 12 that made the first album. He went to the president of Word Records and said, “We need the biggest budget and whatever producer I want.” Adam did everything in his power to make the project perfect.

“I was trying to work, work, work for the kingdom,” Adam says. “But a lot of it was to justify the mess that was going on in my heart.”

After losing faith that God could heal him, Adam turned to drugs. A doctor had given him a medication that took away the symptoms of ulcerative colitis. But Adam became addicted to other drugs.

“It wasn’t an illegal prescription, but it was definitely something I didn’t need,” Adam says. “And I was abusing it every day.”

On the outside, Adam looked like a good Christian. He’d give his shoes to a homeless person he met on the street and talk about God to thousands during the Winter Jam tour. But inside his downward spiral continued.

Although About A Mile’s debut received rave reviews and was the best-selling Christian album by a new artist, it didn’t live up to the hope or the hype.

“I thought the first album was supposed to work and make everything better,” Adam says.

Adam and his brothers had moved to Nashville with nothing. They lived in and toured in their van. They all worked blue-collar jobs. After the tour and album sales, nothing had really changed. They had the same van, and Adam still worked in a factory.

“I got bitter towards God,” Adam says. “I wasn’t finding my satisfaction in Christ, so I looked for other vices to get me through the day. It was complete darkness in my mind.” Things got so bad that Adam would scream at his brothers if they walked past his bedroom late at night. He even tossed a Bible across the room when his girlfriend tried to get him to read it.

Adam grew up reading God’s Word. He knows it backwards and forwards. Nearly all of his songs are based on a Bible verse. So deep inside he knew that neither height nor depth, nor anything in creation could separate him for the love of God (Romans 8:39).

Then one night he experienced it first-hand.

Adam told his girlfriend that he was struggling with drug addiction. She could see the bitterness in his heart towards God, but she didn’t know about the drugs.

They cried together on the floor, then she looked at him and said, “Okay, what else?”

Adam hadn’t told anybody that he dealt with lust. It wasn’t pornography. But lustful thoughts would creep into his mind. He didn’t want to tell her, because he thought it’d break her heart into a million pieces.

For the first time in his life, he came totally clean with another person and with God. He confessed his deepest and darkest sins. And his girlfriend’s response reflected Christ’s when she opened her arms, hugged him and said, “I still love you.”

“Ninety percent isn’t enough,” Adam says with tears in his eyes. “We need to come to God with 100 percent and lay everything down at the Cross.”

They cried and prayed a lot that night. His girlfriend prayed for his healing. And Adam was delivered from it all—the drugs, the lust, even the disease.

“I laid down everything at the Cross and a disease that I was suffering from for four-and-a-half years is gone,” Adam says. “It’s completely gone.”

Now instead of “helping” God to achieve his dreams, Adam’s committed to following God with the right heart. He’s seen God bring more joy into his life and more power to his songs.

Each song on the new album radiates with honesty and musicality. >From the hard-driving “Taking Back” to the acoustic “All I Need” to the pop flavored “Born To Live,” the lyrics point directly to Christ and His power.

“The first album was good,” Adam says. “But I was focused on singing the best vocal and making everything perfect. On this album, I just wanted to make sure God was speaking through me.”

Adam gave up a lot of control with this project, even turning over creative decisions to Eskelin during the production process. With the first album, Adam wanted to hear several different mixes of a song. This time he trusted Ian’s expertise. The band also switched labels, signing with Eskelin’s recording label, Radiate Music.

The brothers are so excited about the new project that they want as many people as possible to hear it. When the band begins its “Trust You All The Way Tour” on October 14, every concert will be open to anyone to attend. Only a freewill offering will be taken at events.

“We’re going out and playing for free, trusting God to provide,” Adam says. “We believe He wants to sustain us throughout this tour, and we want to give all the glory to Him.”

For most bands taking that leap of faith would be scary . . . but Adam’s faith goes to 11.