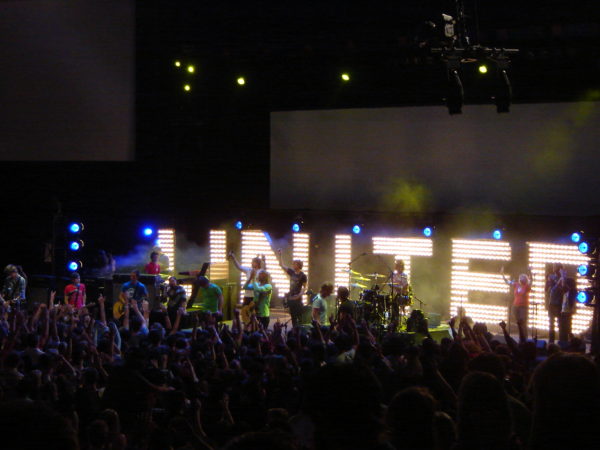 The Holy Spirit was certainly present for a moving night of worship in Pittsburgh, Pennsylvania on a hot July evening (29th).  Lauren Daigle set the tone for the evening by opening with a wonderful set.  She ended her time by singing “How Can It Be,” which had everyone singing along, the lights from the stage dancing across the faces of the crowd.

While crew members worked on getting the stage set up between bands, one of the members from Hillsong UNITED spoke to the crowd for a few moments.  He told about some of the things they have been doing recently, including a trip to Israel.  While there, they filmed several songs in multiple locations, and that is now available as a CD/DVD set.  They showed a teaser video from the DVD, which helped to get the crowd excited for the upcoming show.

After a few moments, the lights dimmed, signaling the impending start to the show.  The suspenseful sounds of Tchaikovsky’s 1812 Overture emanated from the speakers as the curtains that had been hanging ascended toward the rafters.  The lights were simple, plain white pillars rising from the stage.  One of the women in the group began to sing, her powerful voice speaking of how God’s love is written in a billion stars.  The background screens echoed this sentiment, displaying a design reminiscent of a myriad of galaxies, swirling through infinity.

Throughout the evening they played many well-known worship songs, and there were even screens dedicated to displaying the lyrics so that people could sing along.  The ever popular “From the Inside Out” began simply, with just an acoustic guitar as accompaniment, and eventually transitioning to the full band.  The song ended as it began, with the acoustic guitar playing as the choir of audience members poured out their hearts in praise.

While this concert was not about putting on a flashy stage show, the lights and background screens added a nice touch, often with a different theme for each song, evoking the mood of the song.  As the band sang about falling upwards in “Touch the Sky,” the screen right above the stage appeared to be a spiraling staircase, reaching toward heaven.

At one point, one of the guys in the band spoke, reminding everyone that despite the tumultuous and often uncertain circumstances in the world today, God has already won this fight.  We can put our hope in Him because He is in control and He is faithful.  This man ended his time by leading the arena in a time of prayer, thanking God and praising Him for His incredible love.  The band then launched into “Prince of Peace,” which sings of God’s overwhelming peace that meets us in our darkest moments.

After a few more songs, there was a bit more speaking, which led to many people praying to accept Christ as their personal Savior.  The band also led the audience in a time of communion, bringing up one person to actually partake of the communion elements and be a representation of the many.  They ended this time of communion by singing a simple chorus of praise.  Most of the lights in the arena were turned off, allowing the countless cell phone flash lights to illuminate the room, a beautiful picture illustrating the power of allowing God’s light to shine in one’s life.

As they neared the end of their set, the band played “Oceans.”  Waves of blue lights washed over the crowd, and the ethereal sounds of the keyboard rippled out from the stage.  The audience responded to this much beloved song with such enthusiasm, their voices intermingling with those in the band.  This was just one of many memorable and inspiring moments from the evening, and everyone in attendance left feeling uplifted and encouraged.