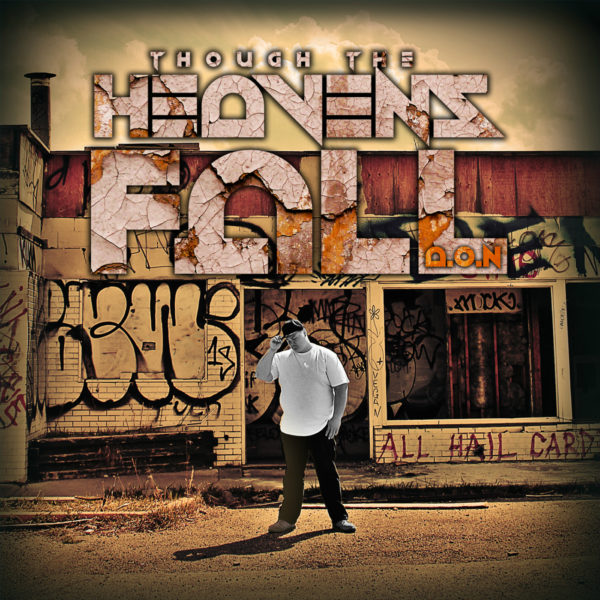 Review: A.O.N – Though The Heavens Fall

Canadian emcee A.O.N (All Or Nothing) drops “Though The Heavens Fall” at a critical time, as Christians worldwide need every bit of faith they have today in order to stand in a seemingly Godless society.

Immediately A.O.N puts everything on the table in the title track and intro song “Though The Heavens Fall” defining the album theme. With the help of Leina, the featured artist, A.O.N expresses his faith in an unchanging God, even if the heavens fall. Sonically it’s refreshing to hear the album begin with mainstream-esque boom bap beats and rhymes, and thankfully the vibe is consistent throughout for the most part, although the production credits feature a variety of producers. On “This Is Me” A.O.N raps about his journey and growth as an emcee and man of God over a soulful track reminiscent of Hip Hop’s Golden era. The next few songs feature heavy weight emcees such as Infinite and Braille on “What We Do” and Swift on “Make Room”. Throughout A.O.N raps confidently, comfortable in his craft and identity, his lyrics provide a respectable degree of transparency telling his story, and worldview. A.O.N digs deeper, and even takes what some may consider a risk for a male Canadian emcee on songs like “Everloving” featuring Theory Hazit & Sarah Rodriguez which deals with the issue of abortion, and then on “All Lives Matter” which speaks to socio-political race issues (particularly in America) through the lens of the Gospel. The last two songs on the album hold no punches. “Oh Lord” is an urgent cry for help similar to that of David the Psalmist only in this case over a trap style beat. Lastly, “Focal Point,” featuring Swinn Da Example & SYD, focuses on religion, and hypocrisy.

Lyrically the album feels like part testimony, part exhortation, while sonically A.O.N does a good job at making an honest, contemporary boom bap rap album. Though The Heavens Fall is available now, and AON is a talent to look out for in the future.