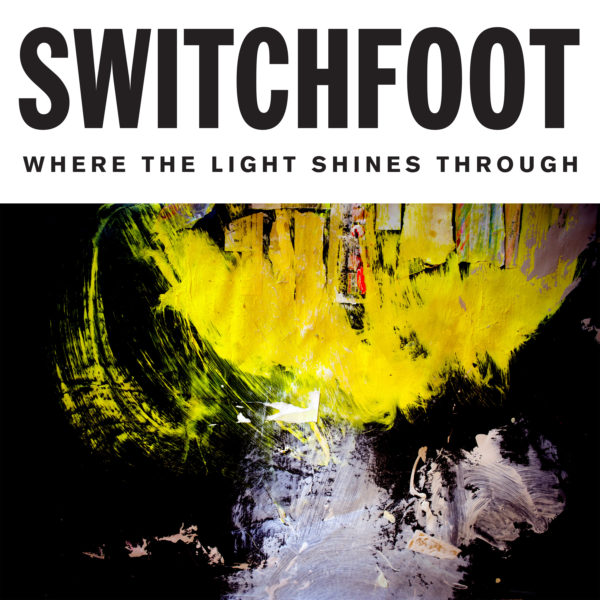 Review: Switchfoot – Where The Light Shines Through

It’s difficult to talk about the Christian Alternative Rock music scene and not mention Switchfoot. For a band that has been around for as long as they have, it is no small feat that they have stayed relevant for all these years. Jon Foreman, Tim Foreman, Chad Butler, Drew Shirley and Jerome Fontamillas have succeeded in leaving a permanent imprint on the hearts of millions of fans around the world with their unique compositions, heartfelt lyrics and captivating live performances.

Where The Light Shines Through (the band’s tenth album) is yet another brilliant addition to the amazing array of records that the band has produced, but to properly understand its style and approach you have to make reference to their previous offering Fading West.

Fading West represented an obvious change in direction in the band’s sound replacing their signature gritty and edgier alternative rock sound with a calmer, sing-along pop/rock style. Although the album went on to be a good success, the change got mixed reactions from listeners and many fans who were already used to their signature sound.

As with everything in life, change is inevitable and from this album the band is clearly comfortable with this sound, exploring it to the best of their ability. The album starts with Holy Water, a song that gets you into the general groove of the album, drawing you in with its lovely piano progression, echoes and finger snapping chorus. Float, the second track of the album, is one of those songs that really pushes the boundaries of what the band is capable of doing (in a positive way of course). The bass guitar is enough to get you out of your seat and moving to its infectious rhythm, and this is a consistent trend throughout the album.

The title track, Where the Light Shines Through, sounds like they borrowed a page from their friends NEEDTOBREATHE’s book with its southern rock/country vibe. The sound really reaches its climax at the 3:18 mark when the voices chorus “The wound is where the light shines through, the wound is where the light finds you”. I Won’t Let You Go is a masterpiece reminding us of the band’s song writing prowess. A lovely ballad with honest lyrics carried by Jon’s melancholic vocals, you would find yourself drawn to this track as soon as it starts to play.

If the House Burns Down Tonight picks up the pace of the album again, with an energetic chorus that gets you pumped up as soon as it hits. The Day I Found God is a worship number with very profound lyrics, “The day I lost myself was the day I found God” a reoccurring line in the song which really says it all. Musically, it reminds me of a slightly stripped down version “The Blues” from their Nothing Is Sound album.

Shake This Feeling and Bull in a China Shop are both upbeat tunes showing a little more of the band’s diversity. The lyrics “…everybody wants to rock and roll but a couple of years down it take a toll…” from the former seems like a reflection of the band’s thoughts on their change of sound telling listeners that they feel they are headed in the right direction. The latter is one of the catchiest tunes on the album with most of the credit going to Chad and Tim (on the drums and bass respectively).

Live It Well is an okay song by Switchfoot’s standard but it comes across as somewhat bland. This is not because the song isn’t good but because it feels like a shadow of some songs we’ve heard from previous albums, only less memorable. Looking for America is a coming together of two of the greatest song writers in Christian music today and it reflects in the lyrics of the song. Grammy award winning rapper Lecrae is well known for addressing issues that pertain to the state of America today and he brings his energy into the song to make it a unique and powerful mash up indeed. Musically, I don’t think the two styles came together as well as they should have and as the song progresses you start to hear them (Jon and Lecrae) lose their individual flares in an attempt to create something new.

Healer of Souls has a hint of the “old-Switchfoot” teasing you with a bit of edginess but not quite getting there throughout the entire song. Hope Is the Anthem brings this album to a close in what has slowly become “Switchfoot-fashion”. Borrowing from previous album finishers like “Where I belong” and “Red Eyes”, its tender lyrics leaves your heart warmed and gives you hope for a brighter and better future. In typical Switchfoot fashion it employs the use of echoes and chants (very similar to Red Eyes), and towards the end you can hear a faint “…like holy water” which takes you back to the first track, bringing the album full circle (also very similar to the concept of the Vice Verses and Hello Hurricane albums).

Where the Light Shines Through like I earlier stated is a brilliant album capable of standing on its own two feet in the time that it was released. My only fear is that in a couple of years it won’t be one of those albums that can be called exceptional or memorable especially from a band of their calibre. Fans miss their old sound and as awesome as this album is, it would always suffer the mixed reviews its predecessor did.

Nonetheless, Jon Foreman and the rest of the band always manage to make up for their flaws with their incredible songwriting and thought provoking lyrical content. This has always been their secret weapon and irrespective of their change in sound, as long as they have this, they will always be a force to be reckoned with.

Buy Where The Light Shines Through
iTunes | Amazon