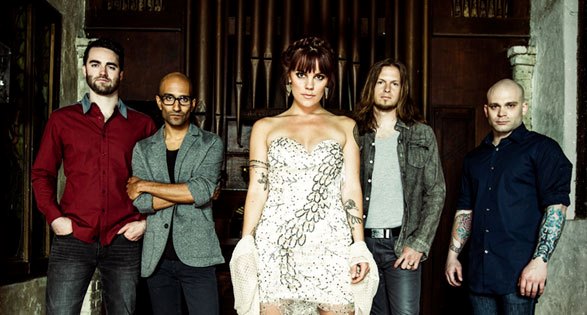 Kristen May Steps Down As Lead Singer of Flyleaf

Kristen May has just announced that she will be stepping down as the lead singer of Flyleaf. Citing that she wants to be there for her newly born son and that she never really felt as though she fully fit in with Flyleaf as her main reasons for her decision, Kristen May’s 3+ years with the band have now come to an end. The announcement video can be watched below.

Does this mean the end of Flyleaf? That is unclear at this moment in time as a statement from the band is yet to be released, but the Kristen May era of Flyleaf is definitely now over. During the former Vedera vocalist’s time as the front woman of the band, Flyleaf have released their Who We Are EP in 2013 and their full length album Between The Stars in 2014 on loud & Proud Records.

The announcement also comes a few months after releasing her solo album Conversations, which is now available.

Although Kristen May’s time with Flyleaf has come to an end she has said that she’s pretty certain this isn’t the end of her musical endeavors so be sure to get plugged in to her social medias below to stay up to date on her future ventures. As for Flyleaf, be sure to get plugged into their social networks below as well to be among the first to be updated as to the status of the band. We will update this article when the band’s status has been announced.

The future is always yet to be written. We love you ? #FlyleafFamily

Buy Between The Stars
iTunes | Amazon