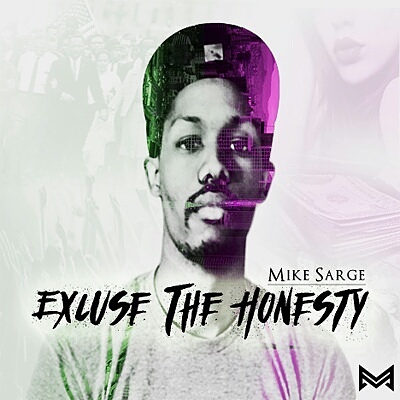 When considering Mike Sarge’s new album Excuse The Honesty, there truly are no grounds for a pardon.  For that would assume that there was an offense to begin with.  If you’re offended by truth conveyed via dope hip-hop, perhaps excuse yourself…but the rest of you should hang tight.  Please be at ease while giving your attention.

There are plenty of positives to salute about this project, so the beginning seems the logical place to enter the fray.  Pulling no punches on the de facto title track, “No Apologies”…Mike not only enters the fray, but does so while seemingly hovering above it all.  An up-tempo drum pattern accompanied by a scintillating synth courtesy of producer Sound H. set the optimal sonic backdrop. Sarge goes in to expose hypocrisy of all sorts with lyrical ambivalence towards any potential backlash.  This track lays a foundation appropriate to the stated purpose of the album’s title.

As for standout songs on ETH, one would be hard-pressed to choose one favorite from amongst over a handful of brilliant offerings. However, it says here that “Strap Curry” featuring CHH vet Mouthpi3ce and young phenom Kaleb Mitchell got played roughly ten times straight before yours truly could make it past the album’s second track.  Sitar-esque strings, vocal sample hiccups, and atmospheric sounds courtesy of Superstar O’s instrumental, account for the canvas.  The three emcees all properly lace the track with colorful lyrics, but decidedly not off-color.  Mike drops gems such as, “You chasin’ cheese bruh? You gettin’ mice with it…You tryna steal His crown, you gettin’ lice with it” and “I’m just gettin’ warm. The difference between you and I is the form. What team you on? Wait…difference between U-N-I-FORM…what TEAM you on?” There are honestly too many quotables from all three artists to detail here and the hook is immersive…just go to iTunes already!

Moving right along, “Green Tea” is perhaps my least-favorite track, production-wise.  However, Mike Sarge most definitely comes correct lyrically, alongside a hook and verse from Wxnder y that fit the beat like a glove.  Meanwhile, whatever lackluster nature the beat possesses is immediately and substantially elevated once Wxnder’s fellow DREAMR artist Alano Adan (f.k.a. Flo) bodies the final verse.  Besides, who cares whether or not the beat appeals to my eardrums?!? *sips tea*

On “Blind Eyes” Mike cuts deep into a deluded Western society and popular culture, with a haunting soundscape courtesy of Ado merged flawlessly with a hypnotic, sing-songy hook courtesy North Carolina’s-own KNG that will vibe out even the most stoic of listeners.  This track will definitely find itself in your workout/ride-out playlists.

Next, “We Lit” is a free-spirited, fun-filled track reminiscent of some of Lecrae’s crossover-appeal songs, such as “Cruising”.  Yes, that comparison just happened.  Immediately on the heels of that lighthearted tone, “Trust Issues” is a heavy, vulnerable and introspective song featuring another great beat from Ado and a rhetorical chorus that anyone can relate to.

Featuring an excellent instrumental, another phenomenal hook from Wxnder y, and lyrical suplexes from Mike and guest MC Germaine Martel, “Nothing Less” is, well…nothing less than awesome.  Mike takes shots at skinny jeans while following up an extended metaphorical scheme about sack lunches and corny, stereotypical rappers.  I approve on all counts.  I’m not quoting it here because our readers need to hear this song for themselves!  Germaine follows up by blowing up the entire rap industry’s façade, secular and Christian, as it should be.  Fair game is fair game.  This track is another stalwart.

“Royalty” is a roiling, bouncing track featuring staccato flows and proclamations of favor and unapologetic Kingdom lineage courtesy of Sarge and another guest from the Tar Heel state, Mike Teezy.  This song incorporates accelerant and excellence in perfect unison, so don’t allow your eardrums to blink or you may miss yet another banger.

In a plot twist, the album’s 9th track brings us tales of former crushes coming out the woodwork and feeling salty to be the one spurned this go-around.  On “How Ya Feel”, our venerable rapper Mike Sarge conveys needing to swerve the same ladies who once gave him the curve.  It may seem trite, but it is based upon a real-life situation.  (Check back for all those details in our interview and profile on Mike later this weekend.)  The song features a slappin’ beat from Freak Van Workum and a classic hook, both of which Chris Chicago would flip for.

The album’s next two tracks, “Ghost” and “One Call Away”, respectively, stand side-by-side juxtaposed as polar opposites of moments in time.  The latter essentially comes across as an immediate response to the former.  Whereas “Ghost” finds Mike bemoaning feelings of hollowness and estrangement from God, “One Call Away” abounds with the hopeful declaration and acknowledgement that the Lord is, in fact, always there.  These two songs harken to James 4:8, which read, “Come near to God and He will come near to you. Wash your hands, you sinners, and purify your hearts, you double-minded.”  Sin, hurt and anguish can all cause us to feel distant or even separated from God, but His goodness, mercy, and faithfulness ultimately prevail in the lives of those who lean on Christ as the Rock of our salvation.  He’s always right there waiting to hear from us, even when we’re in up to our ears in our own messes and Mike does an excellent job of illustrating both turns of the table.  Both songs encapsulate the prevalent theme of transparency, in addition to further building upon the album’s consistent attributes of excellent production and songwriting.

Rounding out the album are two more cuts produced by J. Caspersen, who also produced “One Call Away”.  On “POV”, Mike laments industry games, entitlement, and criticisms levied at him personally.  As always, Sarge brings it back to his ultimate center, the Gospel, finishing off with this line from the chorus: “I’m just tryna give my point of view…and even if you hate me for it, I’ma still pray for you.”  That’s essentially Matthew 5:44 in a nutshell!  On the final track, a bonus song entitled “Square Root (BAE)” and featuring Butta P., Mike and one of CHH’s most lethal femcees wax poetic about their better halves being a perfect, heaven-sent match.

If it hasn’t been made abundantly clear yet, I apologize…I love this album, unequivocally.  You will too.  I am definitely a new fan of Mike Sarge and his music.  Go check out Excuse The Honesty and, while you’re at it, Sarge’s catalog.  Join the troops!  Salutes to that!