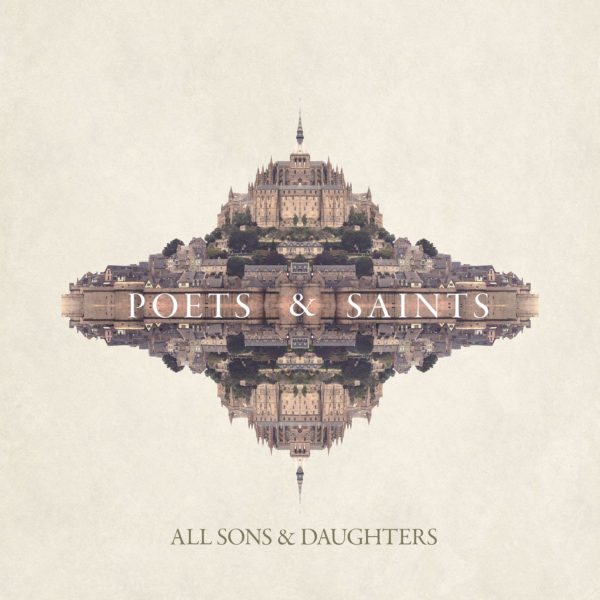 Lyric Video: All Sons & Daughters – You Hold It All Together

Project Inspired By 10 Ordinary Christ-Followers Who Changed The World

GRAMMY and Dove Award nominated worshipers All Sons & Daughters, acclaimed author and pastor Jamie George and a film crew ventured to Europe to trace the lives of C.S. Lewis, Saint Patrick, John Newton, Saint Thérèse, Saint Francis, William Cowper, Saint Augustine, George MacDonald and others, mining for undiscovered gems, something to connect these individuals to modern believers. The resulting epic journey into the lives and stories of these Christ-followers that God used to wake up the world,

All Sons & Daughters’ fourth full-length album, Poets & Saints, was produced by Chad Copelin (Crowder, Gungor) and mixed by Shane Wilson (Brandon Heath, Vertical Church Band) and Sean Moffitt (Newsboys, Jordan Feliz). Alongside the album is Jamie George’s book, Poets and Saints: Eternal Insight, Extravagant Love, Ordinary People, and the video-based curriculum and study guide, Poets & Saints: A Community Experience, which George and All Sons & Daughters members David Leonard and Leslie Jordan collaborated on to create. Together these resources form an interactive worship experience that introduce 10 important influencers in Christendom, while making a very human connection between their lives and the lives of Christians today.

What Leonard, Jordan and George did not anticipate was the creative and spiritual wakeup call for them. “We knew God was doing something we could never have imagined beforehand,” Leonard says. “It was only after we got back from Europe and began seeing the video footage, the lyrics coming to life, and reading sections of Jamie’s book, that we began to experience the life-changing nature of the process.”

“The more we uncovered the truth about their lives and how they communicated with God, the more important it became to us to show how they’re still influencing our lives today,” continues Jordan. “We believe God is transcendent in His nature… so He takes something that is ancient and plants it in the present to wake us up.”

“These songs and stories stirred up all kinds of questions,” adds George who crafted the Poets & Saints book to be a unique blend of biography, travel memoir and spiritual insight, taking readers from a pub in Oxford to a cathedral in the Italian hills and beyond. “One of the most beautiful ways to know God better is to learn from those who served Him in other times and cultures… these saints and writers are not abstract, hopeful representations of what we should be. They were actually really broken people who chose to feel through their suffering. That takes a lot of courage, and that’s why, years later, we call them poets and saints.”

Creating a “soundtrack” out of their own experience in this unique journey, Jordan and Leonard’s Poets & Saints album draws from a theological well. From the ambient opening of “Heaven Meets Earth” to the benediction of “Creation Sings,” each song testifies to the limitless creativity and mercy God has for His creation.

The album’s first single, “I Surrender,” which was co-written by Jason Ingram and inspired by the life of Saint Francis of Assisi, sets the tone for the collection. This track, as with every turn on the album, explores new sonic territory for All Sons & Daughters.

“From jazz, bluegrass, country influences and Americana, we really stretched our legs creatively, as far as sound goes,” says Leonard. “We sampled sounds all over Europe, from the sound of clapping under a bridge, to the hairbrushes in William Cowper’s house, to waves crashing on the beach… and we used those as percussion in the album. We threw everything out and started taking more chances, still mindful of serving the church, but diving into the opportunity to expand our creative fences.”

Expanding on the connection between the songs and the poets and saints who inspired them, George’s book deepens the experience as he examines the lives of these extraordinary people. Each chapter illuminates the life of the individual, less from an academic approach and more from an intimate look at their humanity. The corresponding video curriculum and small group study guide dig even deeper, asking questions that shine light on the readers’ own journeys.

“We are all poets and saints,” says George, “we all have something to say, and whatever we have to say comes from our places of brokenness.”

“Our hope is that in this music, book and curriculum, people will find connection, with one another and connection with God,” says Jordan. “A place of vulnerability and discovery where there is freedom and forgiveness… conversations that generate spiritual health, a ripple effect that changes people’s lives.”

About All Sons & Daughters:

All Sons & Daughters inspire audiences with their acoustic, organic folk aesthetic and lyrics that focus squarely on Jesus while embracing the tension of the Christian walk. Hailed by fans and critics alike, All Sons & Daughters have released three EPs and four full-length albums featuring songs such as “All The Poor and Powerless,” “Brokenness Aside,” “Oh How I Need You” and “Great Are You Lord,” which is currently ranked in the top 20 of the most-performed songs in churches according to Christian Copyright Licensing International. Receiving a GRAMMY nomination for the song “Soul On Fire,” a collaboration with Third Day, All Sons & Daughters’ full-length CD/DVD LIVE also garnered two Dove Award nominations. For additional information on All Sons & Daughters, their touring, free chord charts and more, go to http://allsonsanddaughters.com, Facebook, Twitter, Instagram and YouTube.

Jamie George founded The Journey Church in Franklin, TN in 2006 as a safe haven for artists and the religiously wounded. All Sons & Daughters was birthed in this faith community. In addition to writingLove Well, The Wisdom of Solomon and R2H – The Road to Hana (a Hawaiian audio tour), he has collaborated with New York Times best-selling novelist Karen Kingsbury on The Heart of the Story, a study on the family of Jesus. Jamie lives in and serves the community of Franklin, TN along with his wife and four children. For additional information on Jamie George, go to JamieGeorge.com, Facebook, Twitter andInstagram.

Integrity Music, which is part of the David C Cook family, is committed to taking songs of substance to the local church and its leaders around the globe. With offices in Nashville, Tennessee and Eastbourne, U.K., Integrity publishes many of the top songs in the Church, including the No. 1 radio hit “We Believe” (Newsboys) as well as church standards “Revelation Song,” “Open The Eyes Of My Heart,” “Your Great Name” and “I Am Free.” David C Cook is a leading provider of Christ-centered resources to equip the local church on a global scale. Originally founded in 1875, David C Cook is an enterprising nonprofit organization dedicated to publishing and distributing leadership and discipleship resources to help Christians all over the world grow in their faith and pass it on to the next generation. David C Cook is headquartered in the U.S. with additional offices in the U.K., China and India. DCC and Integrity publish resources in 150 languages and in more than 200 countries. Proceeds from the sale of David C Cook’s and Integrity’s products are combined with one hundred percent of charitable donations to fund ministry projects with international congregations and partners. Together, we join in co-mission to create, translate and distribute life-transforming resources. Additional information is available at http://integritymusic.com/and http://www.davidccook.com/.