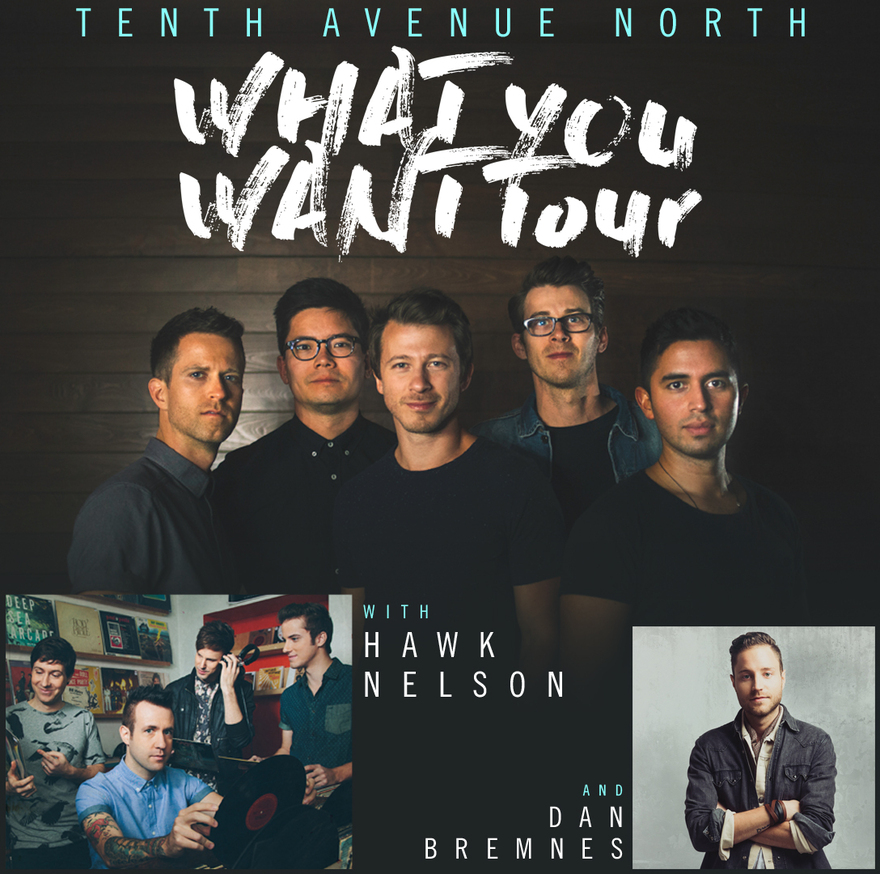 Multiple Dove award-winning band Tenth Avenue North announces the “What You Want” tour with special guests Hawk Nelson and Dan Bremnes. The 15-city tour will kick off on October 6 in Lenoir, NC and conclude on November 5 in Farmington, MO. This tour will be the initial run supporting the band’s forthcoming album, Followers, set to release October 14.

“In the time when we obsessed over leadership legacy and leaving our mark, I decided that what Jesus said is better- Seek first the kingdom of God and his righteousness, and all these things will be added to you. I’ve realized that I’ve been too worried about what I’m going to do for Jesus instead of just following where Jesus leads me to go,” shares front man Mike Donehey about the heart behind the new album and tour. “What if I didn’t need to be a leader? What if all Jesus was asking me to be was a follower? I have a feeling that all the weights would come off, the pressure would stop and maybe just maybe I could finally learn to live from the place of rest. So let’s follow Him – lets follow Him in the joy, in the peace, and wherever the wild heart of God leads us to go – let’s be followers.”

The “What You Want” tour marks the second leg the band has teamed up with Hawk Nelson on the road. The title for the upcoming tour is from the current radio single from the new album. You can watch the lyric video below that was produced by Hawk Nelson’s frontman Jon Steingard.

Donehey, drummer Jason Jamison, bassist Ruben Juarez, keyboardist Brendon Shirley and guitarist Jeff Owen have forged a unique sound that has made them one of the Christian music’s most successful young bands. Tenth Avenue North has crossed the one million mark for records sold and continues to build its strong fan base by achieving more than one million likes on Facebook.


For the most recent tour information, please click here and dates are listed below.