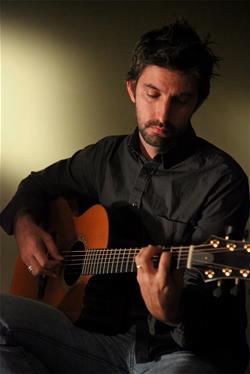 Former P.O.D. guitarist Jason Truby is released a new instrumental CD entitled Hymns  today. Renowned for his innovative finger-style guitar techniques, Truby says the project was specifically produced with the purpose to help people who are going through trauma or sickness, and was originally his wife’s idea.

“I have performed finger-style covers of hymns in my live sets over the years,” says Truby, “and one day my wife mentioned the idea of a therapy-type album. I know that suffering can consume a lot of thought and energy, so this album was arranged with peace and healing in mind. We started with the idea of distributing it to cancer patients, and now want to make it available to anyone who may be going through grief, recovery, divorce or any other difficulties.” 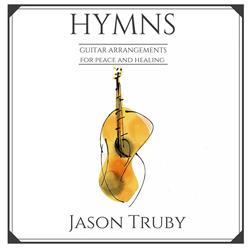 Truby was a member of the rock band P.O.D. from 2002 to 2006, writing songs for the band’s self-titled album which quickly went to Platinum sales status. Truby also penned the title song for the “Matrix Reloaded” movie as well as a song for the Dove Award-winning soundtrack for “The Passion of the Christ.” Truby later teamed up with acclaimed guitarist, Phil Keaggy, for several solo albums, as well as played on a finger-style guitar album with the legendary instrumentalist, Chet Atkins, and classical guitarist, John Williams.  Truby also produced the Grafted  compilation CD to benefit Project Zero, a non-profit foundation specializing in adoption and foster care. Grafted included various artists from all genres including Tiffany Thornton, star of Disney’s “So Random” and “Sonny with a Chance;” Caitlin Evanson, violin player for Taylor Swift; Keaggy; and Stu Garrard from Delirious, among several others.

The Hymns CD features ten of the most familiar hymns of the church such as “Come Thou Fount,” “Amazing Grace,” “It is Well with my Soul,” and “Be Thou My Vision.” Truby says the project moved him emotionally even during the recording process.

“I hope that these arrangements bring peace, and introspection as they did for me while I was tracking,” says Truby. “The lyrics to these hymns are very powerful, and many of them were written during times of grief and trial. I hope it is a gentle reminder that our time here is short, but our souls are forever. Even in the midst of the chaos and turmoil we are experiencing in our society today, we can attain peace in our souls as we pass through this life, regardless of our physical or material circumstances.”