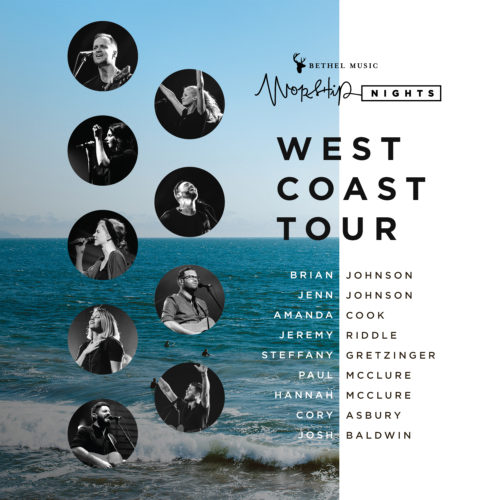 Bethel Music, the worship music and community of songwriters emerging from Bethel Church in Redding, CA, continues its “Worship Nights” tour on the West Coast beginning Aug. 12. The tour, which has hosted sold out events in major market venues coast-to-coast and internationally, features Bethel Music worship favorites and new music from Have It All, the multi-artist double-disc live recording released March 11 that has garnered wide critical acclaim and topped multiple retail charts internationally.

In each city on the tour, a full band and production team, along with a combination of several of the Bethel Music Artist Collective, will lead the songs. Artists on this leg of the tour include Brian and Jenn Johnson, Amanda Cook, Jeremy Riddle, Steffany Gretzinger, Paul and Hannah McClure, Cory Asbury and Josh Baldwin.

In addition to the evening event, a limited number of tickets are available in each city for a special Bethel Breakout session. The Bethel Breakout includes a free song via digital download, an exclusive afternoon question and answer session with Bethel Music artists and team members followed by an intimate acoustic worship session and a two-hour workshop with Bethel Music pastors and ministry team.

“As a group of passionate believers pursuing His presence, our artists and writers seek to capture what we feel God is saying through songs that declare who He is and who we are in Him,” says Joel Taylor, Director of Bethel Music. “Our heart for ‘Worship Nights’ is to partner with what God is doing in communities around the world and see heaven invade earth. Join us for an authentic night of worship, encouragement and prayer as we love God together and pursue His presence.”

For more information on the “Worship Nights,” Bethel Breakout sessions and the worship artists that are featured in each city, go to http://www.bethelmusic.com/worshipnights.

Bethel Music is a worship ministry that formed as an organic extension of Bethel Church in Redding, CA. Over the last six years, Bethel Music has grown from being a local church music ministry to becoming a global outreach featuring a cadre of songwriters and worship leaders, 21 albums, chart-topping songs, and both online and on-campus worship schools. In addition to the above listed artists, the Bethel Music Artist Collective includes Jonathan David and Melissa Helser, Matt Stinton, Hunter Thompson, Kalley Heiligenthal, Leeland and Kristene DiMarco. Together this team of artists are known worldwide for anthems like “We Will Not Be Shaken,” “One Thing Remains” and “This Is Amazing Grace” (2013’s and 2015’s ASCAP Christian Music “Song of the Year,” respectively), “Love Came Down” (featured on American Idol2012), “Forever,” “You Are Good,” “You Make Me Brave” (GMA Canada Covenant Awards “Song of the Year”) and more.

These artists also have five acclaimed albums that all went to the top of Billboard’s Top Christian Albums chart. Their recent Have It All recording hit No. 6 on the overall Billboard Top Albums chart becoming Bethel Music’s highest retail debut on the chart ever. It also perched at No. 1 on the overall iTunes® Albums chart in the US for six straight days while hitting No. 1 in Canada, No. 3 in Australia, No. 6 in Brazil, No. 7 in the UK, No. 24 in Germany and No. 63 in France.

The heart of Bethel Music is to be a steward of the worship being created and released at Bethel Church, making it a resource available to the world. In addition to thousands of people that attend Bethel’s weekly worship services, another 350,000 plus people subscribe to the online stream of the services atwww.ibethel.tv. More about Bethel Music can be found at www.bethelmusic.com.