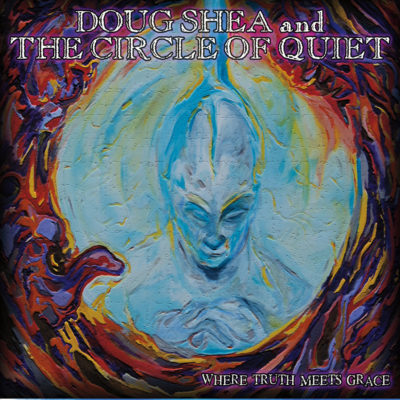 Doug Shea’s album Where Truth Meets Grace was definitely a labor of love for the Wisconsin come Texas local. Backed by his band The Circle of Quiet, the album is raw and honest, melding the established musician’s rock tones with CCM worship.

Opening with “New In You”, we are greeted by an empowering introduction, rich in strings and driving guitar. The tempo slows as the song begins, and a song about redemption in Christ is delivered with passion. This lays the grounds for the rest of the album, which focuses on the highs and lows of doing life with God.

Lead single, “Align My Heart To Send” is next, and gives a slightly more stripped back acoustic vibe to the album. Relying on Doug’s voice and backing vocals to create crescendo, the tag breaks down to a predominantly piano and percussion based sound, highlighting the act of surrender as Doug sings, “I lay my burdens down”. The song is longer than necessary at five minutes, but given the worship genre of the album, provides the listener with an opportunity to truly engage with the song.

Taken from the story in the Gospels about the women who received healing after touching Jesus’ cloak, “The Healer” puts you in her shoes. Repeating phrases like “go now,” “be free” and “all of me is yours,” emphasises the spiritual freedom that comes from obeying God. The melody chops and changes as the song develops, and this gives colour to the reiteration of themes.

A soulful message from God, “Give Me Your Pain” is a call to come to Christ in our weakness. A simple chord progression gives the lyrics the attention they deserve, and the layering of vocals and fade out adds maturity to the release. A soft guitar then opens, “Wrapped in Your Heart,” and Doug delivers a passionate ballad. Portraying both our prayers to God for deliverance and the Lord’s response, it is a testament to God’s faithfulness. Followed by “Light In The Weary Land,” your mood is lifted with a hopeful tune about God’s promises. Similar in sound to a 90s Vineyard hit, a fun electric guitar riff carries the joyful song, making a highlight on the album.

Paring it back down with “And Mighty Is Your Name,” simple instrumentation backs Doug’s vocals. Purer in sound that the previous songs, the acoustic guitar makes this accessible, and will draw you into a place of personal worship. The bridge is particularly noteworthy for its smooth transitions and contribution to the overall vibrancy of the album.

An intriguing piano line opens “Veil of Tears”, and female vocals create a lightness that complements the depth of Doug’s voice. Voice filters add an interesting dynamic to the song, and the fade in during Doug’s solo vocals creates a tension in the overall sound of the song. However, this is remedied as it progresses through mixing and production.

“Not Like Us” will immediately make you think of a Casting Crowns come Daughtry tune. The acoustic guitar and electric line is the best mix in the album so far, emphasising the rock tones of Doug and giving punch to the powerful tune. “Take It Away,” continues this, and the compelling song accurately depicts the struggle we each have with God as humans. Hopeful and majestic, it balances the pain of Doug’s personal struggles with the victory we have in Christ.

Diving straight in, “The Point of It All,” is stripped back, and shines a light on the lyrics which ask God to hear our prayers. The fast-paced chorus and bridge brings you back to the 90s and there are elements of country tones embedded throughout.

“Strength (In A Broken World)” captures your attention for the dulled sounds of people arguing in the background. This ushers in an emotional ballad, which is both a prayer for deliverance and thanks to God. The choice to include the background noise is simple, but it personalizes the song and drives home the fragility of the human condition.

Following on with “God In God Out”, a soft rock vibe complements a catchy chorus, and will have you singing the tag line for days after first hearing it. The clever bass line and a nearly-80s sounding keyboard adds a different dimension to the song.

Finishing up with “Hold Me Close,” production lies at the forefront of the well-balanced melody line. Choosing to layer Doug’s voice for the first time, tension builds and this is one of the strongest tracks on the album, causing it to finish on a high note despite the sombre nature of the track.

A rock/worship combo, Where Truth Meets Grace is a humble take on our dire need for God. Jumping between different eras in sound and musicality, it is strongest when Doug is left to pour his heart out with simple vocals and measured musicality. Ideal for personal worship, people will resonate with the honesty expressed through each song.