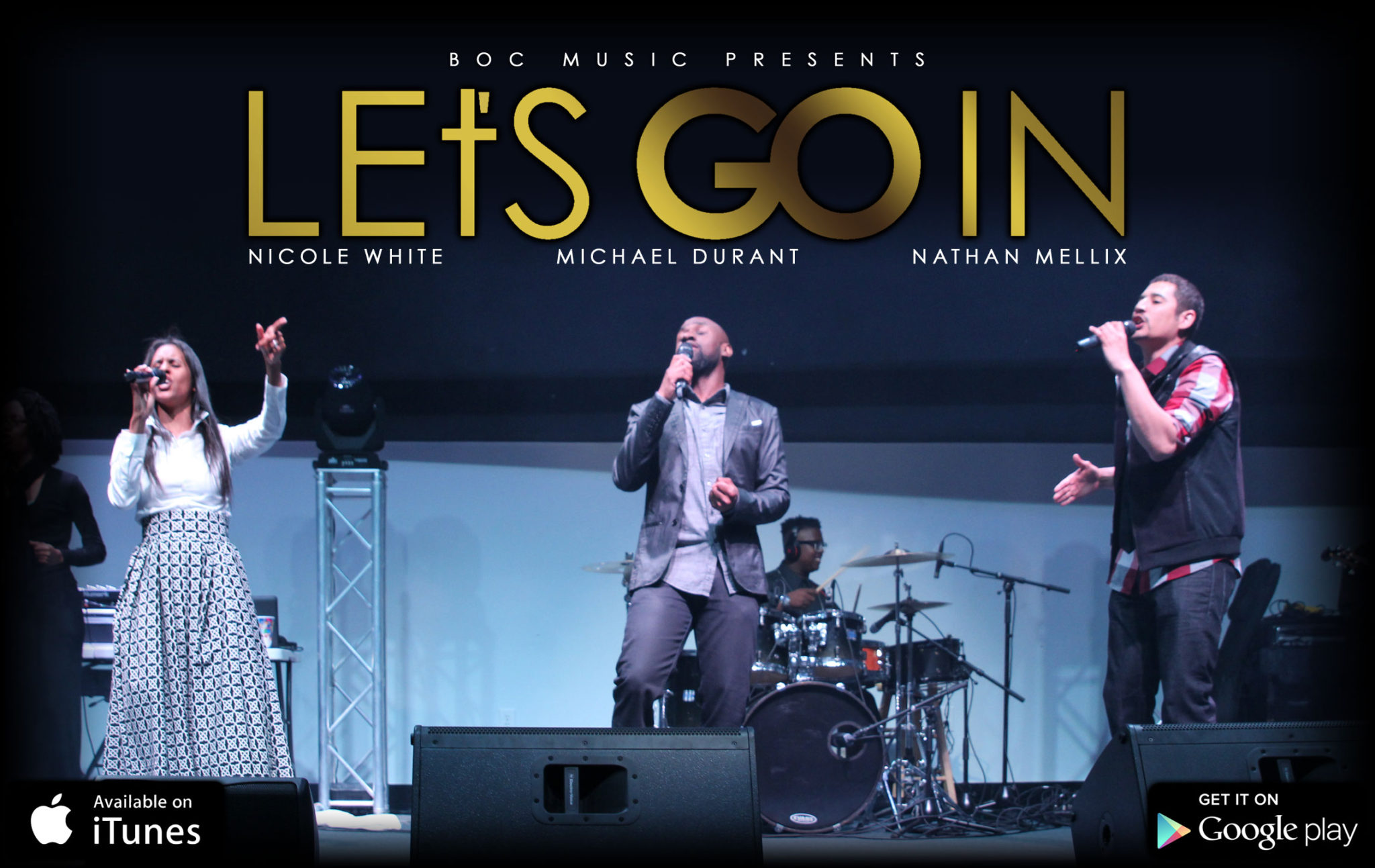 An Interview With BOC by Saviela Edwards Thorne

BOC (Body of Christ) Music released their first compilation CD entitled, “Let’s Go In” on April 8, 2016 at their Album Release concert in Myrtle Beach, South Carolina. Filled with family and friends from all over the US, many were inspired, encouraged and excited about the future of BOC Music. Their slogan, “It’s more than music…it’s ministry” represents the heart of the BOC Music Record Label.

The highly anticipated compilation album “Let’s Go In” was released on April 8th, 2016! It features Nathan Mellix of Charlotte, North Carolina, Michael Durant of Brooklyn, New York and Nicole White of Myrtle Beach, South Carolina. BOC Music hosted an album release concert on Friday, April 8, 2016 at Ground Zero in Myrtle Beach, South Carolina. With over 530 people in attendance from all over the US, this concert was definitely one that many will never forget. I was there to witness this amazing concert and I must say this group has so much to offer to the Christian Industry. The album is full of praise and worship with a very diverse feel! They are a breath of fresh air, and with all new music it’s one set to impress!

I had an opportunity to sit down with a few members of the Christian Rap side of the BOC record label, who actually performed that day: Myles “P” Payton, Corddaro “CORD” Brown and Cedric “Well Ced” White  and DJ Larry J (Larry Thorne Jr.)

Tell us a little about BOC and how it was formed.

Well Ced: BOC stands for Body of Christ. It started out as a vision and thought. We felt in our spirit that we were hearing from the Lord and desired to bring Christian music into the industry that we could relate to. God allowed us to meet and network with a lot of people and as a result we started to come together. God formed this and God gets all the glory.

Tonight, April 8, 2016, is the release of the Let’s Go In Album and You will also be performing songs from your album, Delayed but not Denied that was recently released as well. Tell us what the story is behind both albums.

CORD: Delayed but Not Denied was released in Feb, 2016 this project was a reflection of our year in 2015. It was a rough year for us as we experienced alot throughout that year. We obtained a distribution deal with Sony Red that went sour. We also had several deaths within our families. But God remained faithful through it all as we stayed on the course. We were able to come up with the album, Delayed but Not Denied and it has been a success. We were able to tell our whole story of what happened with the distribution deal and the deaths within our families and the testing of our faith through the trials.

Myles P: Let’s Go In a compilation CD with music from Nicole White, Nathan Melix and Michael Durant It doesn’t matter where you are and what your situation is, you can always worship the Lord. It’s just pure worship.

Nicole White is actually the wife of Well Ced and Nathan Mellix is his brother in law and Michael Durant is your best friend. So what is it like working and producing music with your family?

Well Ced: That’s a great question. There are great times and then there are difficult times. The reality is we are building a relationship so we understand each other when times get rocky. You confront with an intent to reconcile. We are confronting situation and taking constructive criticism but the end goal is to bring together the most professional and most anointed project to glorify God.

Well Ced, How do you balance being a husband and father of 3, and being the CEO of your own record label with 2 different genres of music (Christian Rap and Praise and Worship)?

Well Ced: Its actually very easy, I like everything I am doing. Its time consuming but we enjoy the fact that we get to come together and that we have known each other for years. Myles P is my first cousin and Cord and myself go way back. Nicole, Nathan and Michael, we have all been working together for a long time so we understand each one another. The relationships we build allow us to work well together. They build relationships on their side and we build relationships on our Christian Rap side and we all come together and make it happen. It’s a lot to balance but God gets all the glory and he gives me the strength.

CORD: God is about to move in a mighty way. We are glad to be in this platform again with my brothers to worship the Lord and knowing everything is genuine.

Myles P: I just want to take this time to give a shout out to my first cousin and mentor without him, none of this would be possible. It’s a blessing and I am just overwhelmed to see all this and to be a part of this.

Well Ced: God is good I want to thank the Lord, my parents and my pastor they have all poured into me and to into us. It has truly been a blessing to have everyone come together from all over and support us. The Bible says when men dwell together in unity God commands a blessing that only God can do. God Bless you all! BOC for Life –AGTG (All Glory to God)

Special thanks to the BOC family and friends and especially to the back ground concert singers: CaTia Mack, Stephanie Mack, Kerese Clarke, Meagan Bunner, Meshun Crosby and Kevin Slusser and the show stopping band members: Sonny Fordham on keyboard, Trystan Simmons on keyboard, Tyrese Gillard on drums, Carols Gillard on bass, Brent Lee on Acoustic guitar and Seth Freeze on Lead guitar. This group made the night magical.

Both albums, Let’s Go in and Delayed but Not Denied are now available for purchase on iTunes, GooglePlay, & Spotify. Hard copies are available at www.boc-music.com.

We’d like to thank Saviela & BOC for submitting this story to us. Want to submit an interview to be featured on the site? Contact us here.